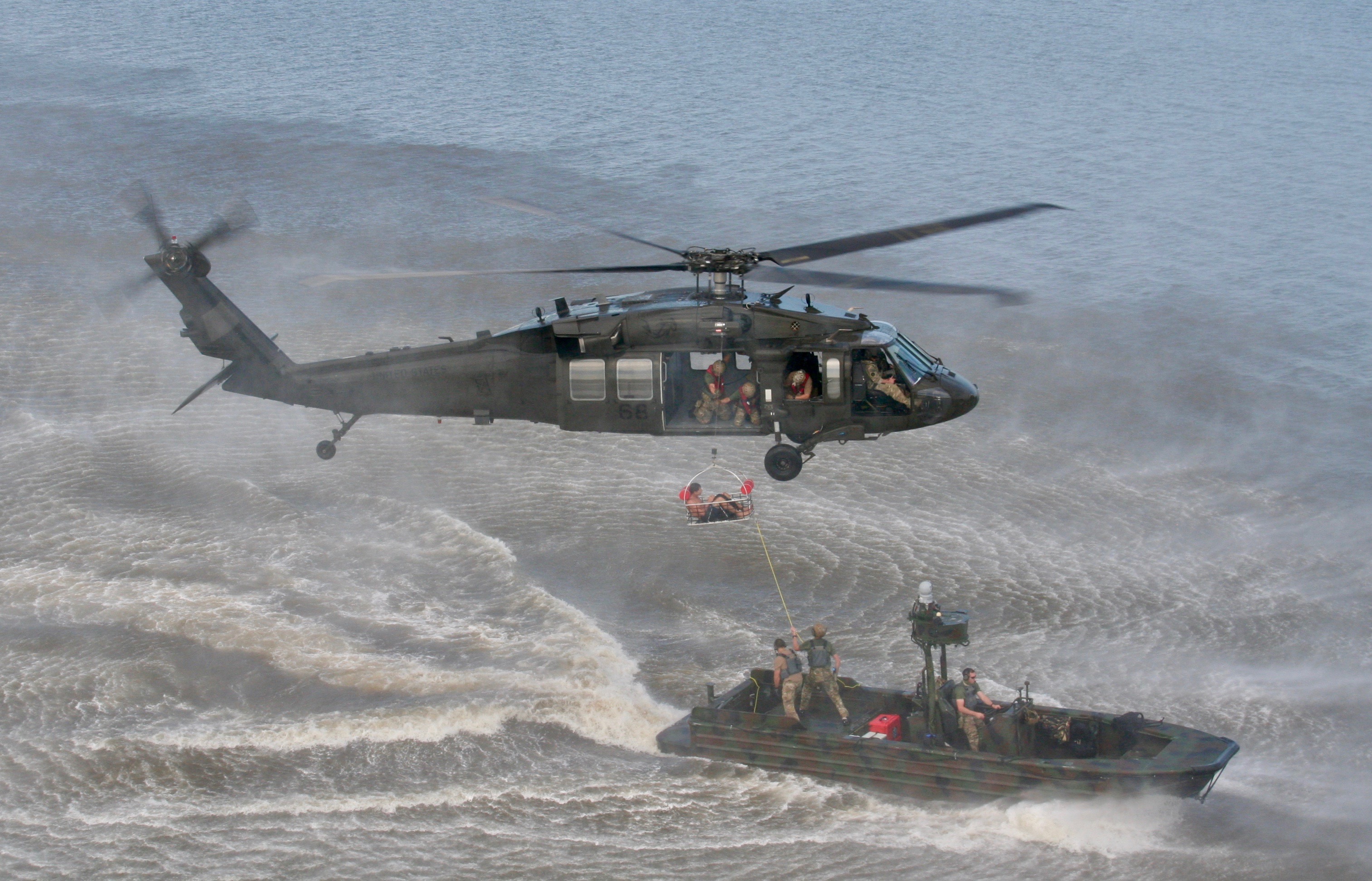 A caller to the FBI tip line reported seeing a man throwing a backpack off the Ravenel Bridge, which connects Charleston to Mt. Pleasant in coastal South Carolina.

FBI special agents and intelligence analysts, working with local law enforcement, gathered evidence that led them to believe the person seen dumping the bag was affiliated with a local militia group with a violent history. The signs indicated the group, once thought to be dormant after the arrest of its leader, was organizing again.

Confronted with this emerging domestic terrorism threat from a group whose members have exhaustive knowledge of the area’s waterways, the FBI Columbia Field Office’s Joint Terrorism Task Force requested support from the FBI’s Hostage Rescue Team and the unique resources and skills of its mobility operators. 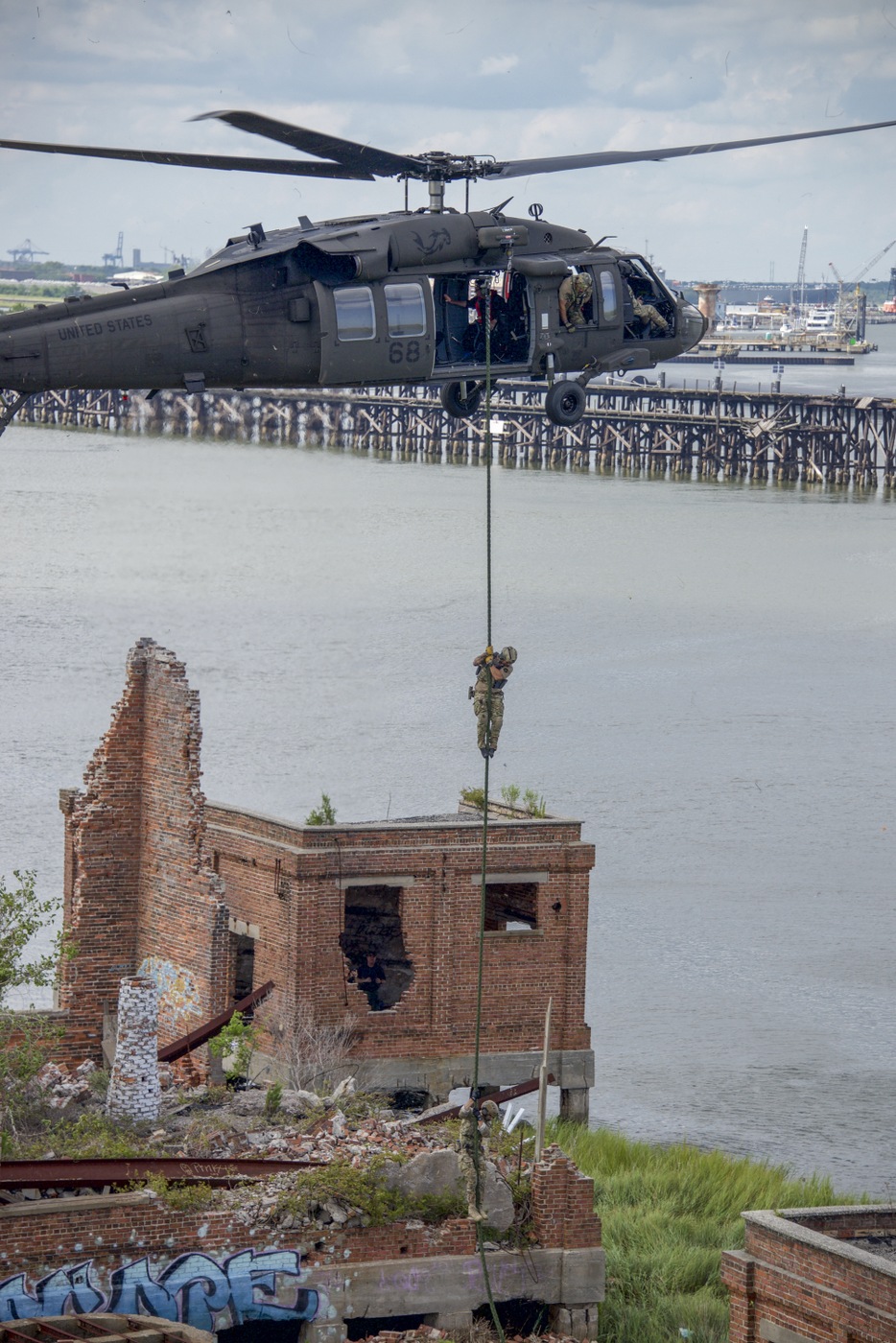 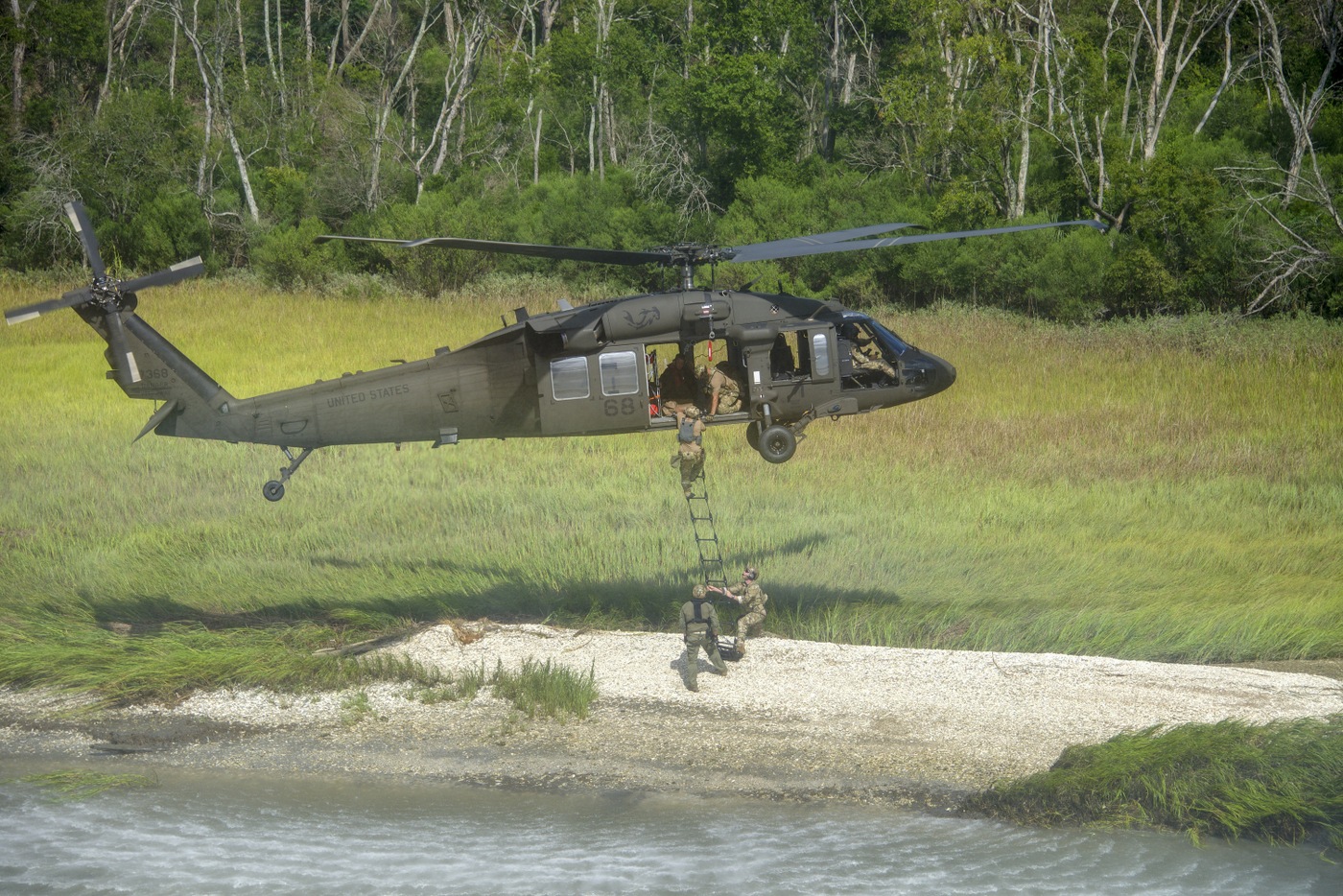 “The goal was to build a realistic scenario to exercise a range of techniques.” 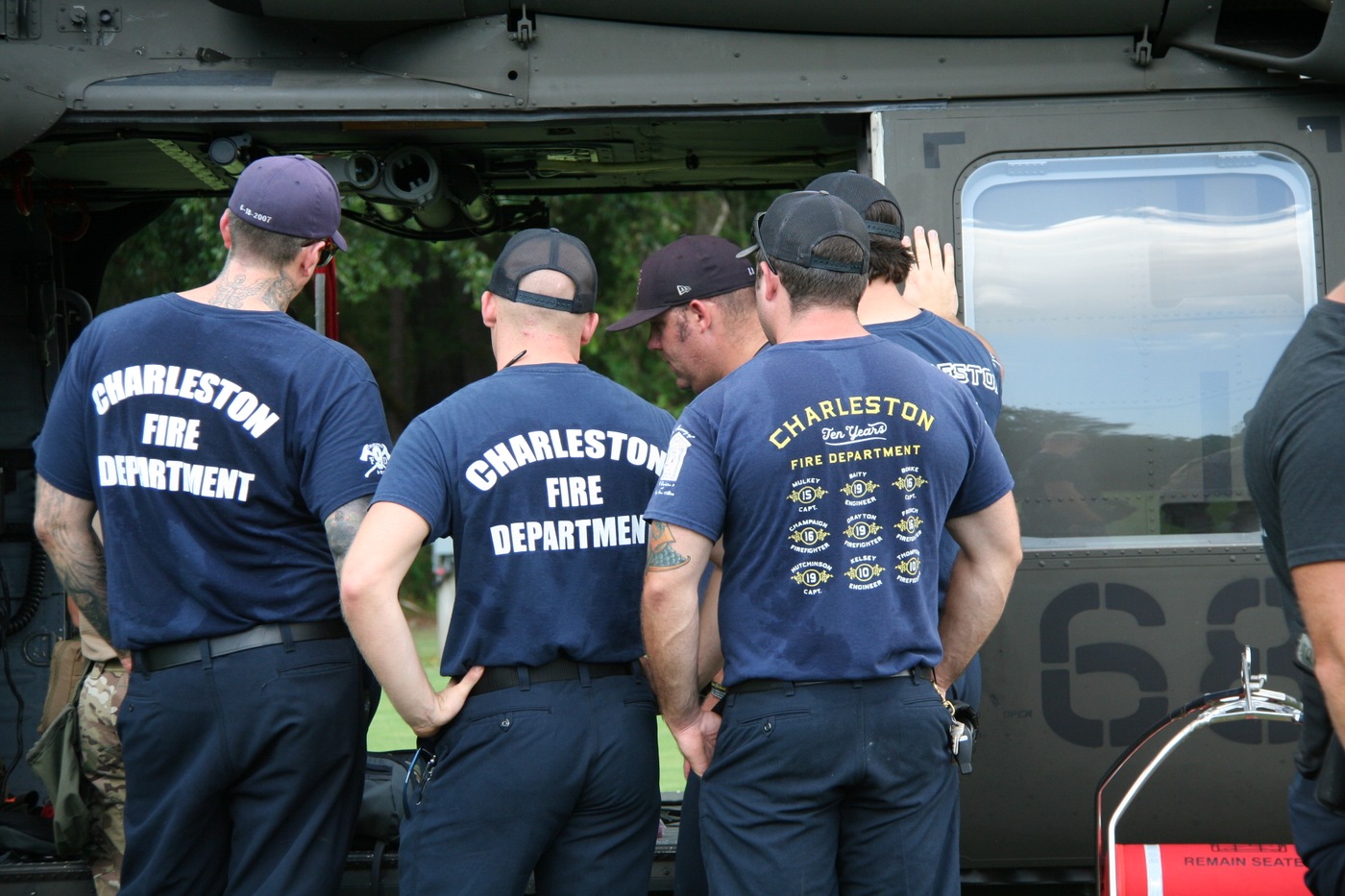 Photos: HRT trainees conduct a fast-rope insertion from a Black Hawk helicopter at Laurel Island in the Charleston Harbor. Agents fast-rope when the environment makes it impossible for the pilot to land the helicopter. | Trainees use a rope ladder to climb back into the Black Hawk after gathering evidence. | The Charleston Fire Department’s tactical emergency medical services team gets familiar with the FBI’s Black Hawk. “We are there for the health and well-being of the SWAT team during their operations,” said Assistant Engineer Chad Smith.

HRT, a selective and specially trained unit within the Bureau, is called in to support the field with complex tactical situations. The Mobility Team within HRT is charged with delivering the people and equipment needed to execute any operation in any location under any conditions. HRT also has a team of tactical bomb technicians who are trained to handle explosive devices under tense and time-sensitive conditions. 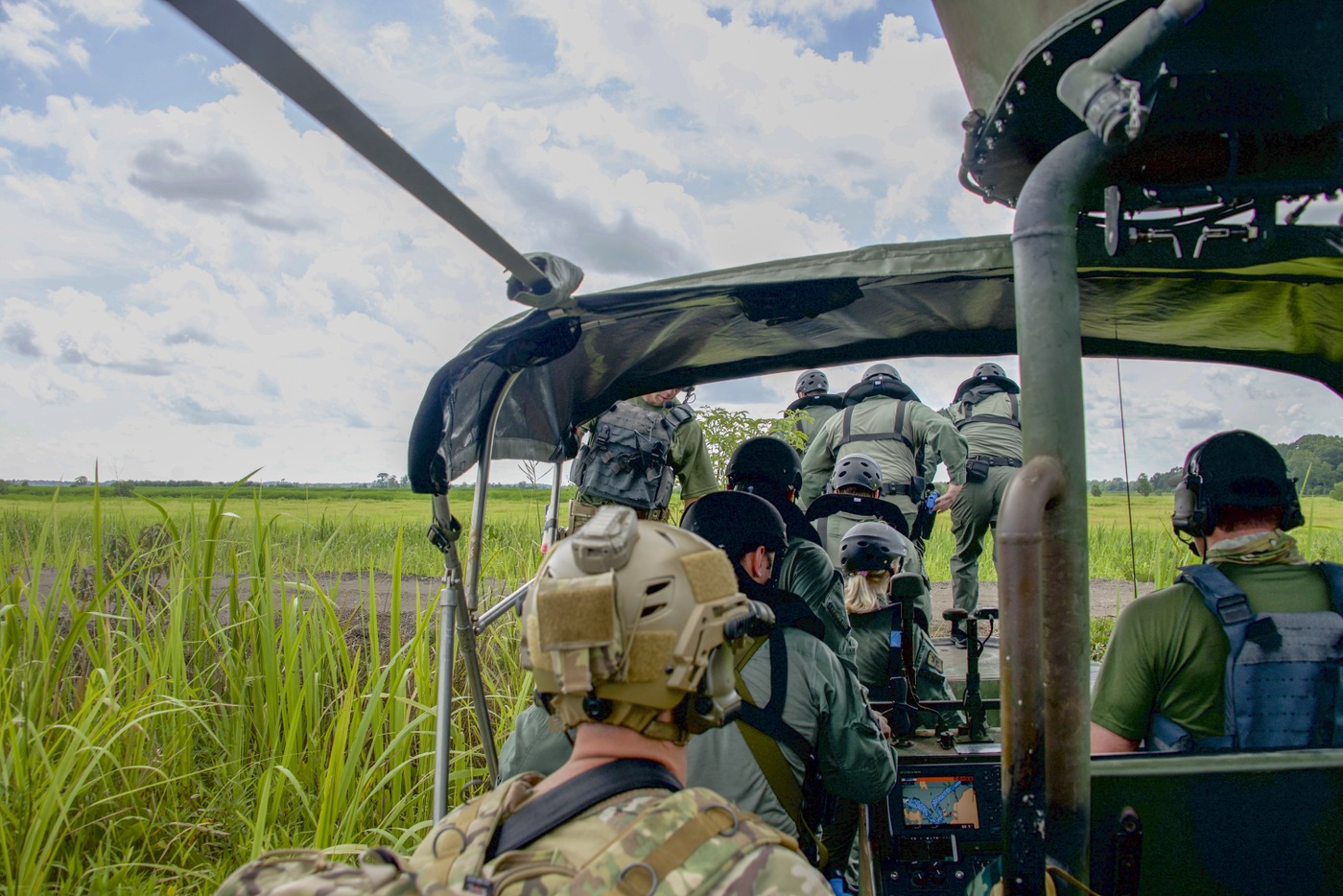 The HRT Mobility Team delivers the Charleston County Sheriff’s Office SWAT team to their objective. An officer from the South Carolina Department of Natural Resources helped HRT navigate to the remote location.

As three HRT helicopters took off from Quantico, Virginia, and HRT mobility operators drove south with two riverine boats in tow, they received word that a bag washed ashore on Laurel Island in the Charleston Harbor. Charleston Police believed it was the same bag that was thrown off the bridge and that it likely contained explosive materials. 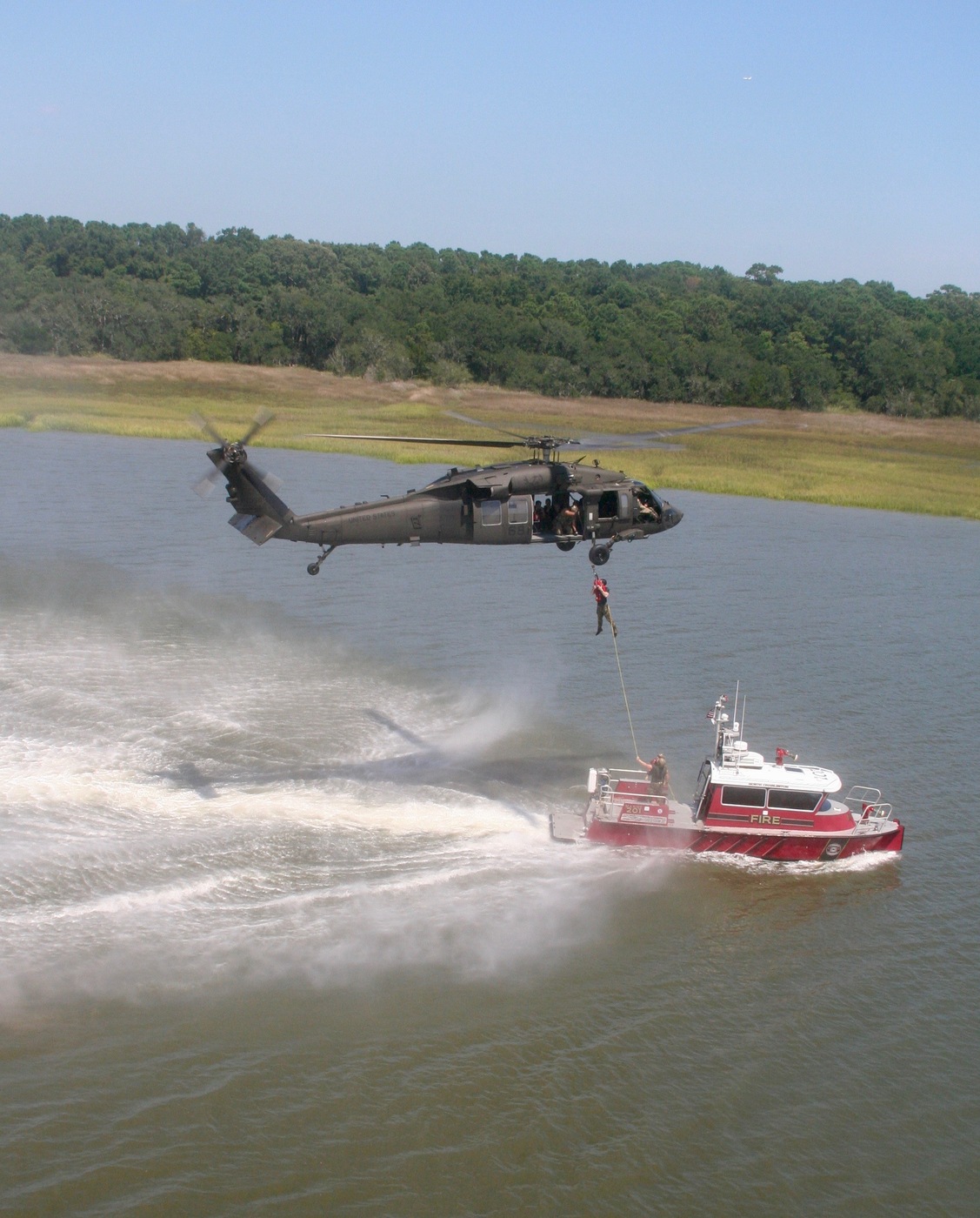 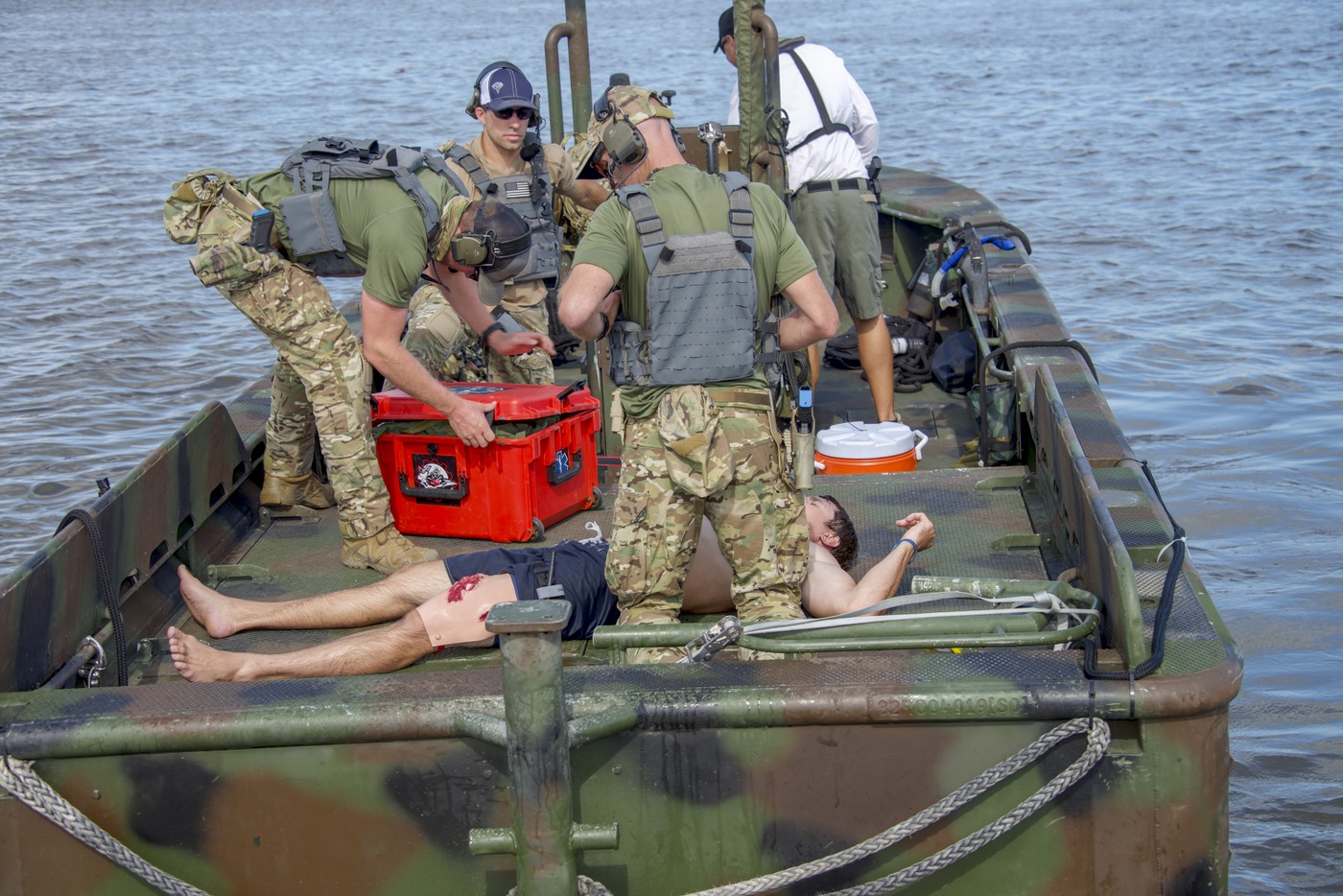 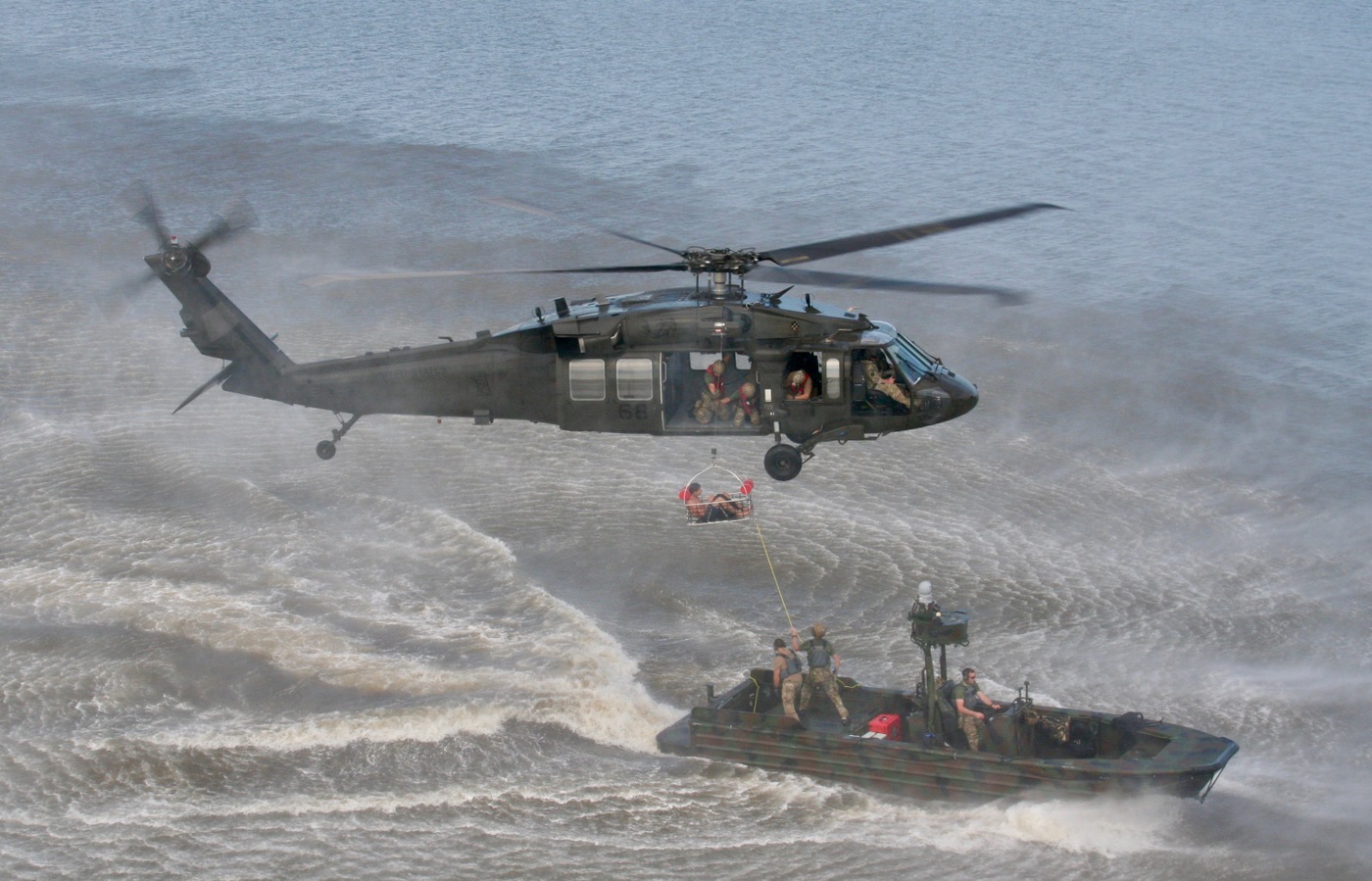 Photos: HRT works with the North Charleston Fire Department’s Marine 201 to conduct a hoist operation from a moving craft in the Stono River near Charleston. | HRT Mobility Team trainees divert briefly from their mission to assist an “injured” boater. The planned incident was part of training the operators to be ready for anything. | After trainees practiced administering first aid, they coordinated with HRT’s Tactical Helicopter Unit to hoist the boater into a helicopter and execute a hospital helipad landing.

So began a three-day exercise that tested and honed the skills of HRT’s tactical special agent bomb technician and mobility operator trainees in a land, water, and air-based training operation involving a dozen state and local agencies. The training also supported the efforts of the FBI’s Maritime Liaison Program, which works with local and state agencies to enhance the security of the maritime environment.

“The goal was to build a realistic scenario to exercise a range of techniques,” said a former HRT mobility team member who is now a special agent with the FBI’s Columbia Field Office and serves as one of the division’s maritime liaison agents. By involving a large number of local first responders, he said an exercise of this type builds strong relationships and creates greater trust.

Take a ride on an FBI riverine craft in this 360-degree video and learn how the Bureau's Hostage Rescue Team uses the fast and maneuverable boats to deploy operators and police SWAT members along rivers and shores where cars and trucks can't go.

“The local agencies gain a better understanding of the FBI’s capabilities and special equipment,” the agent explained. “The HRT trainees see how incredibly important it is to seek out the local expertise and collaborate with regional and state partners.”

“No matter what your abilities are, you can become overwhelmed by the scope of the task,” said Lt. Michael Knox, SWAT commander with the Charleston County Sheriff’s Office, of the need to work and train with partner agencies. “We know we have the ability to make one or two phone calls and line up these kinds of resources. That’s huge for me as a commander.” 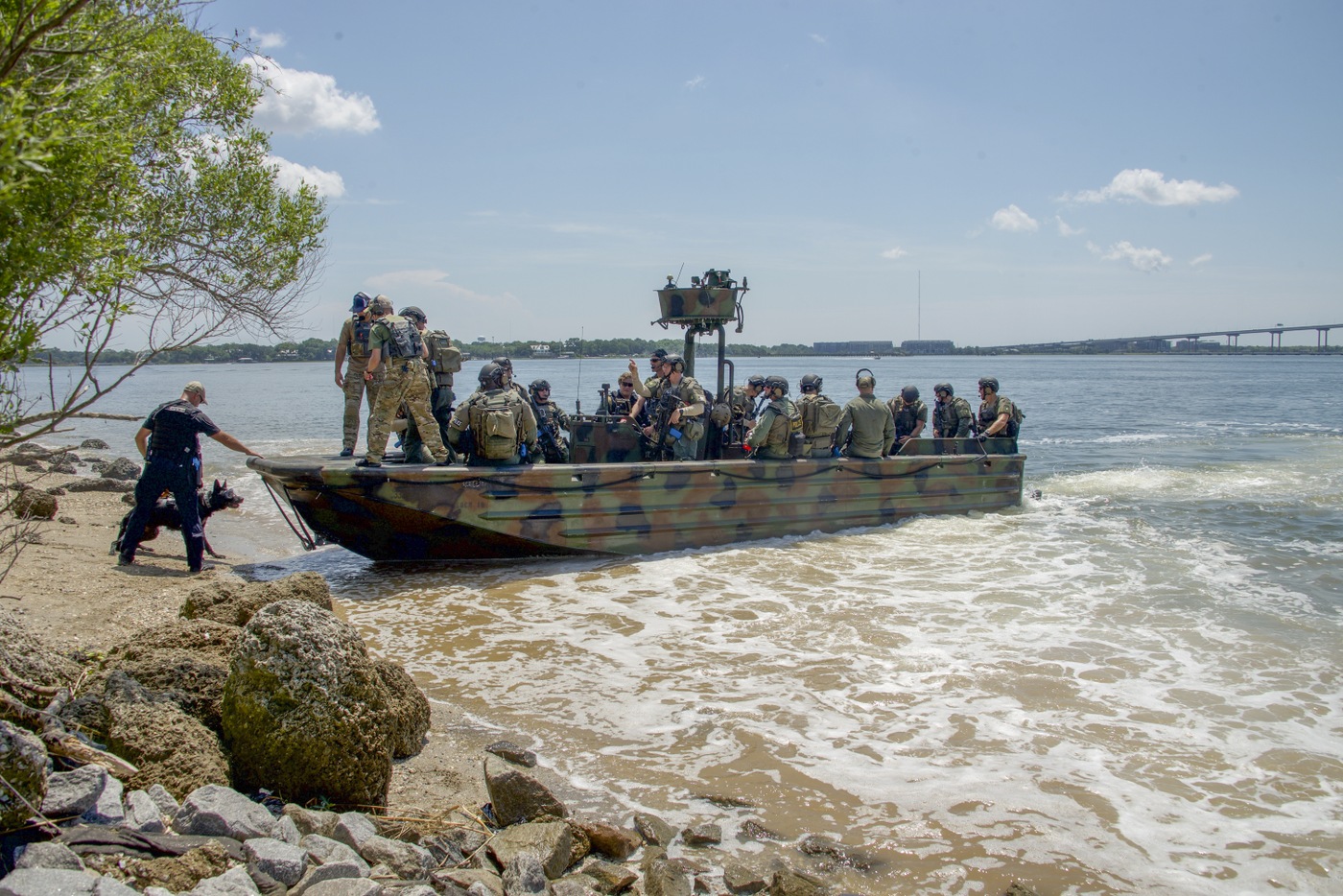 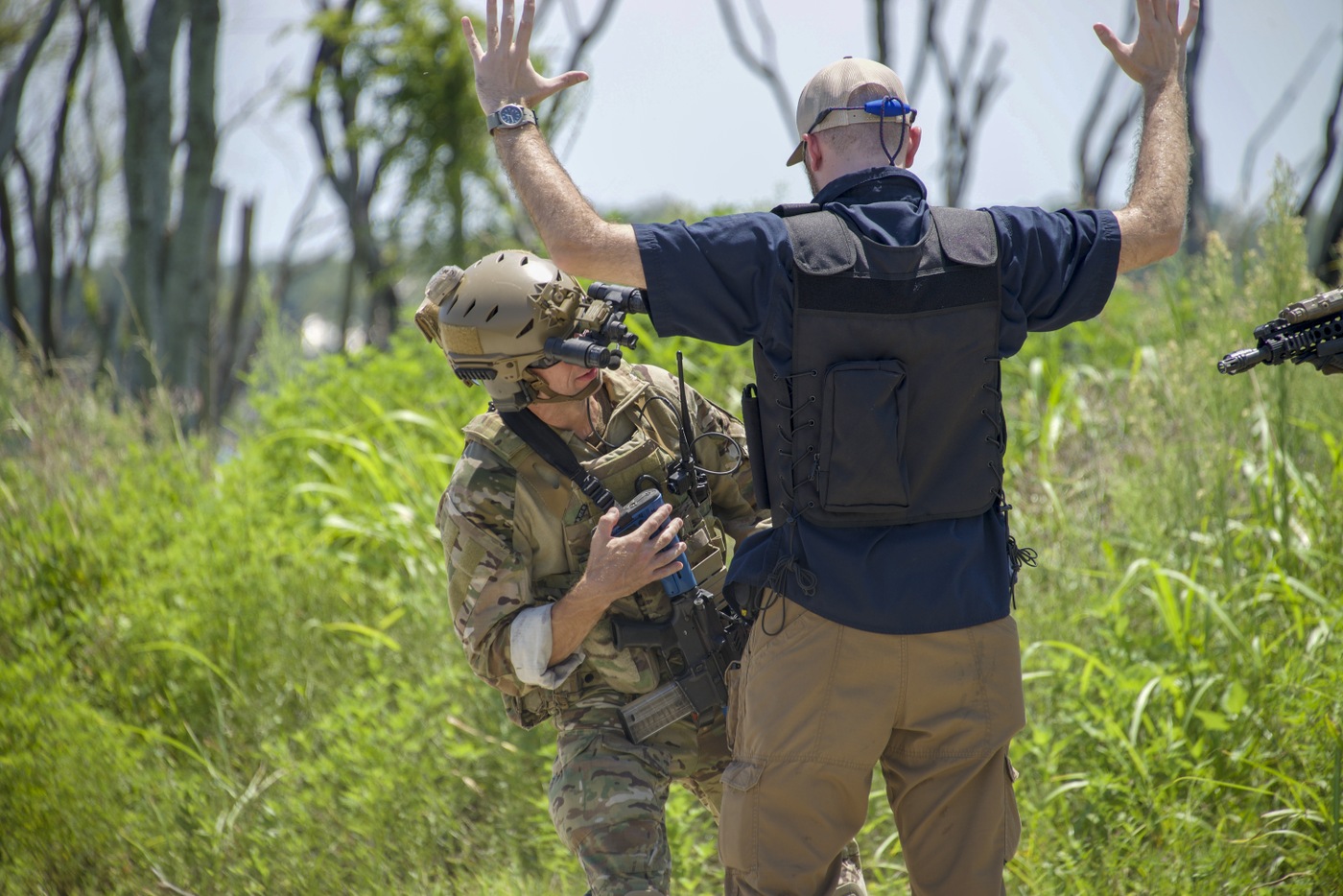 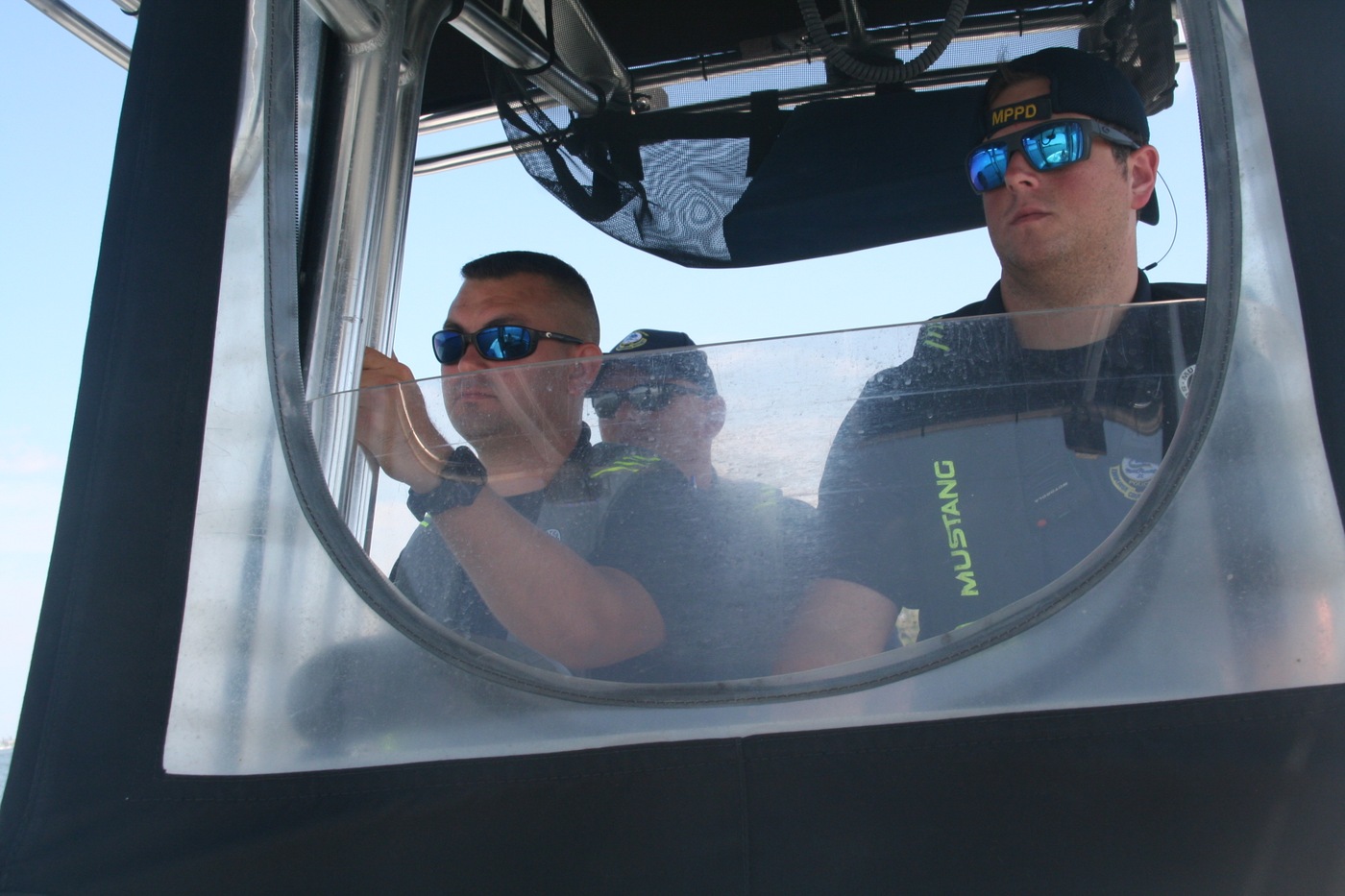 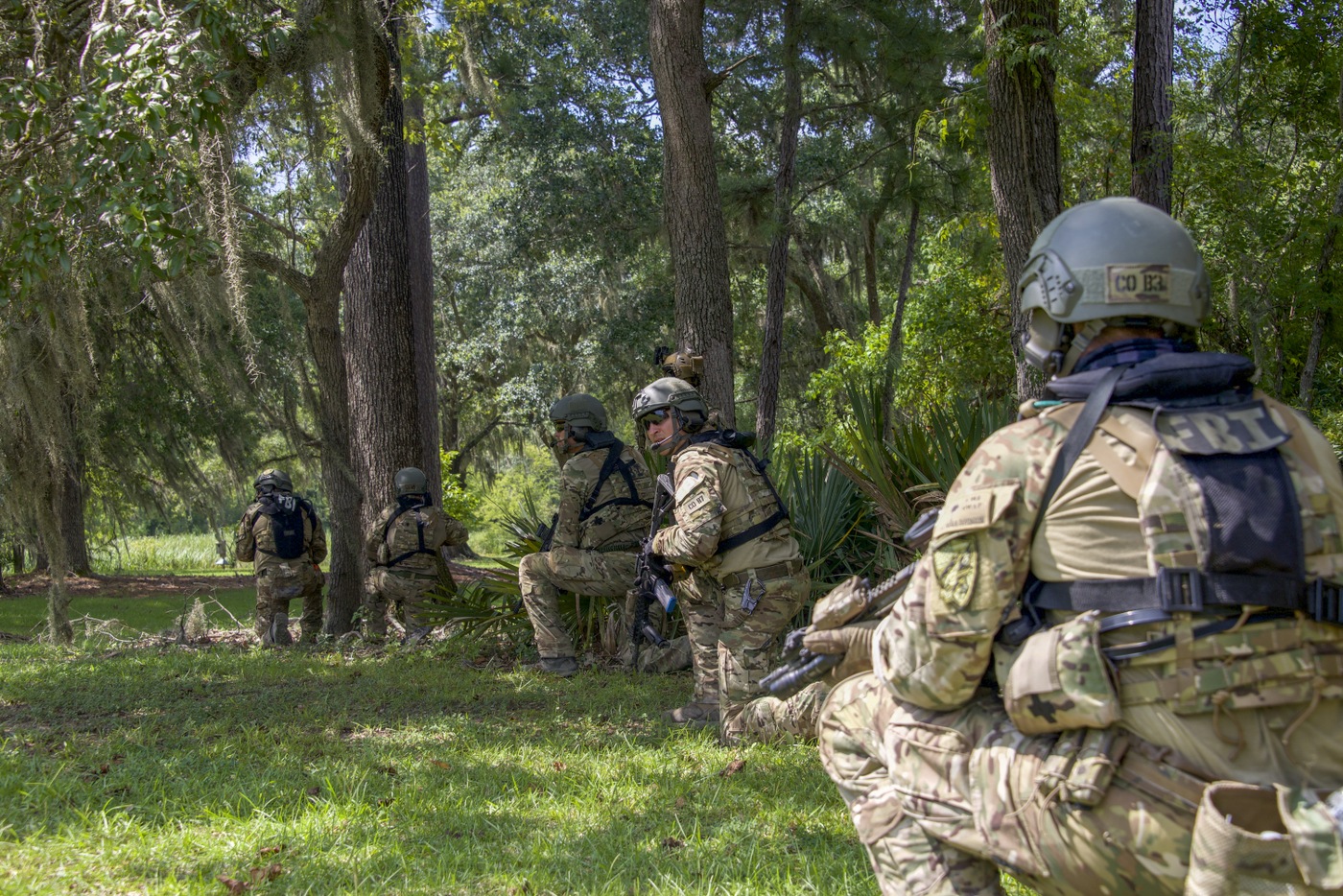 Photos: Charleston Police SWAT team members re-board the FBI riverine boat after conducting a manhunt operation on Drum Island in the Charleston Harbor. | A tactical special agent bomb technician trainee defuses a device strapped to a bystander during a training exercise. | Officers with the Mount Pleasant Police Department patrol the Cooper River between Daniel Island and Drum Island as partner agencies carry out a manhunt. | FBI Columbia Division SWAT team members fan out as they search for suspects on a waterfront property during a training exercise.

Sergeant Eric Light, SWAT team leader with the Charleston Police Department, stressed the importance of training together and coordinating before a critical incident occurs. The Charleston area is popular with tourists, has one of the busiest ports in the nation, and is home to major military facilities. “Law enforcement has to be ready for anything,” he said. 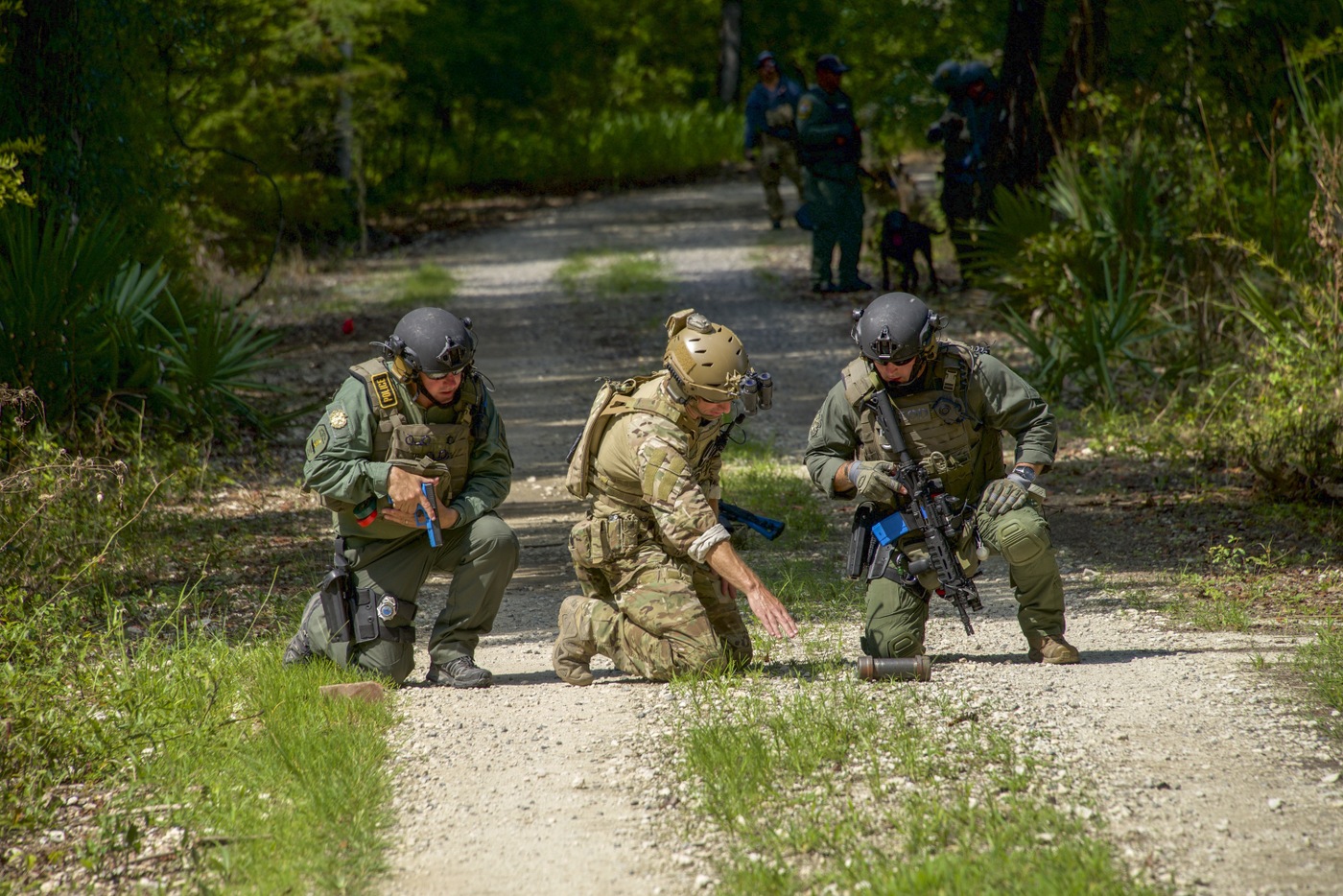 Over the next 60 hours, the HRT trainees fast-roped out of a Black Hawk helicopter to gather evidence on a remote island and conducted a hoist operation to lift firefighters from a moving craft. They rescued an injured boater, ran night surveillance operations and a daytime reconnaissance mission, and provided tactical maritime delivery of FBI and local SWAT teams. They freed a hostage who had been strapped into an explosive vest. Finally, after searching a waterfront property and defusing the improvised explosive devices left in their path, they arrested two suspects.

The scenarios were all manufactured, but the experience gained was real. 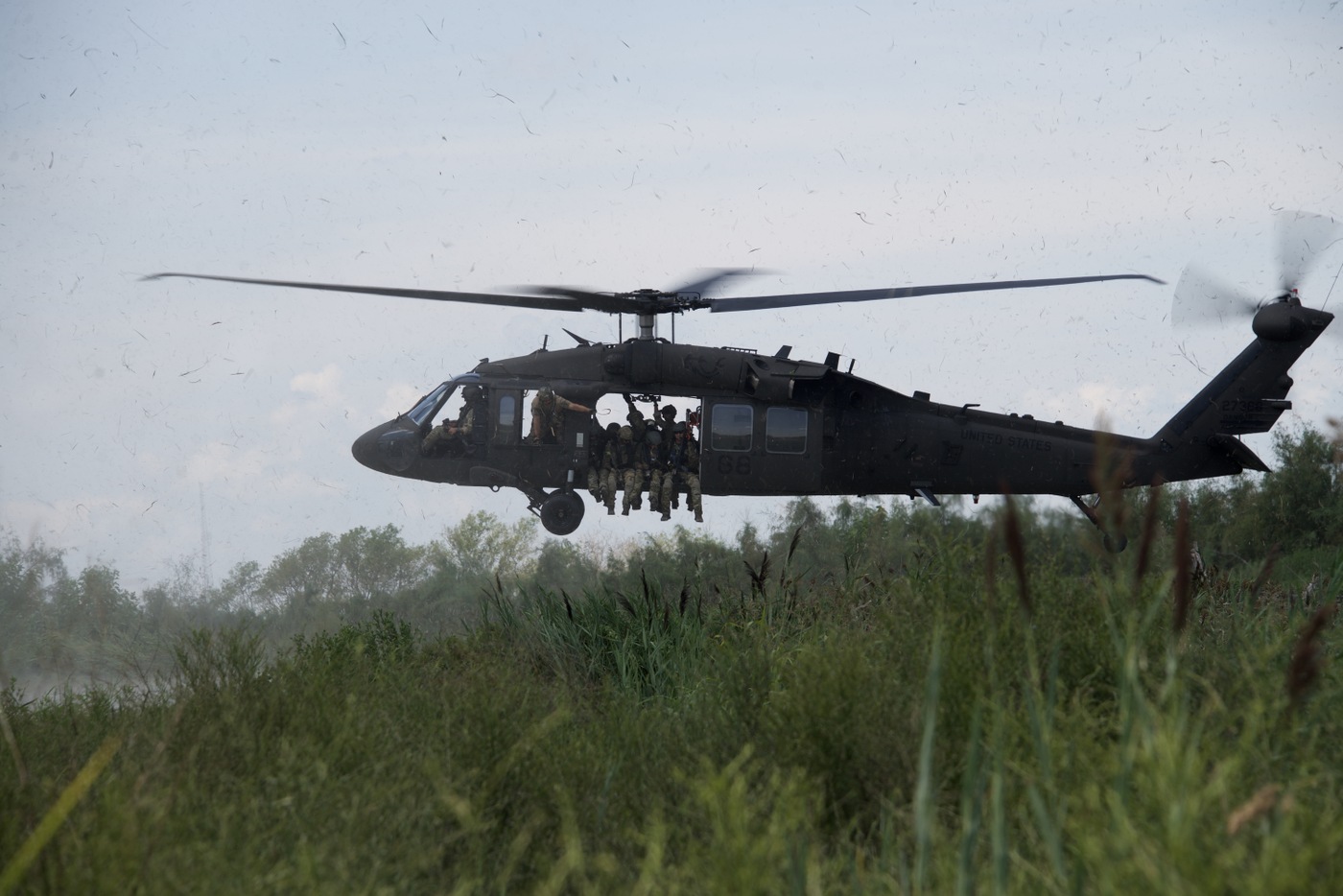 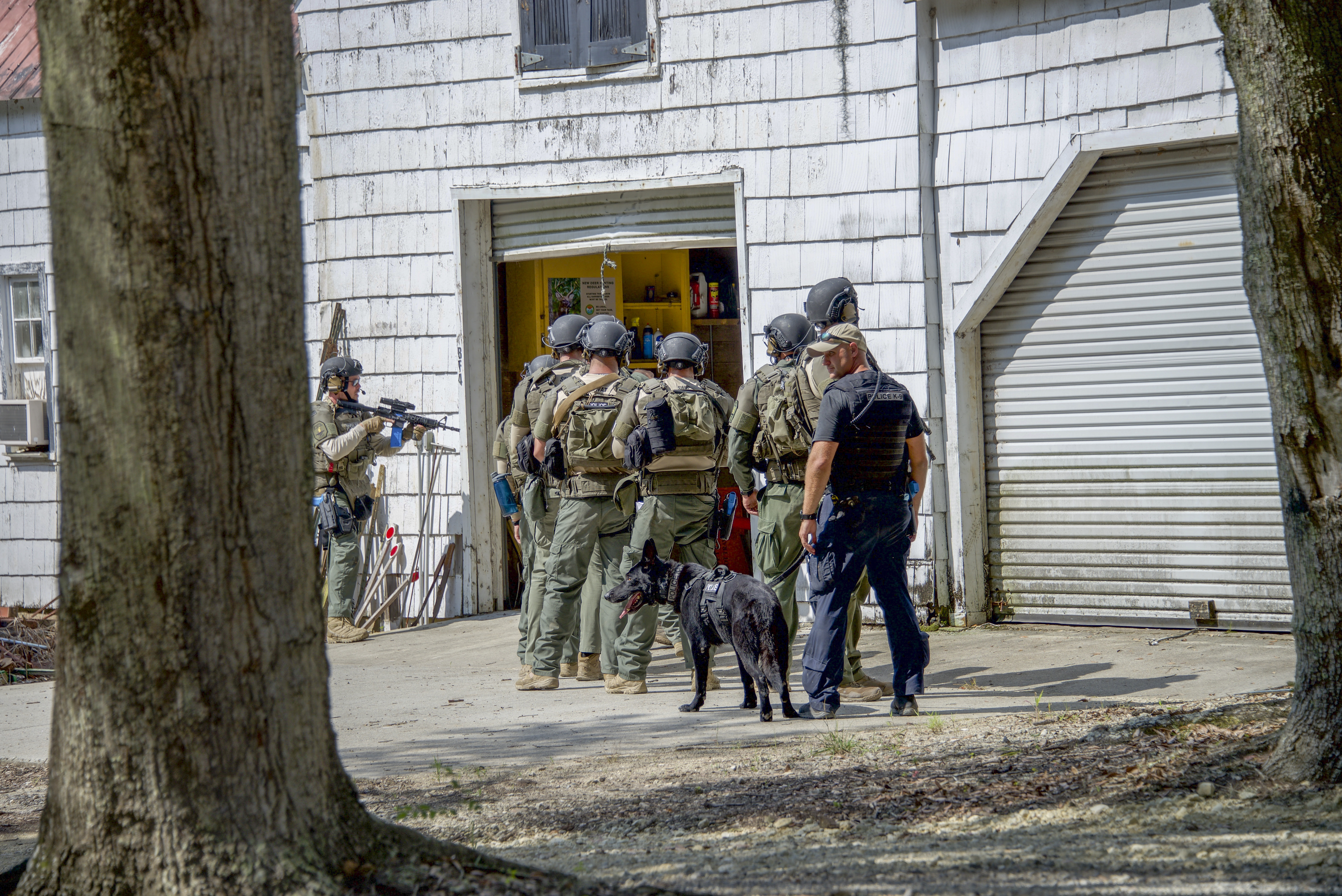 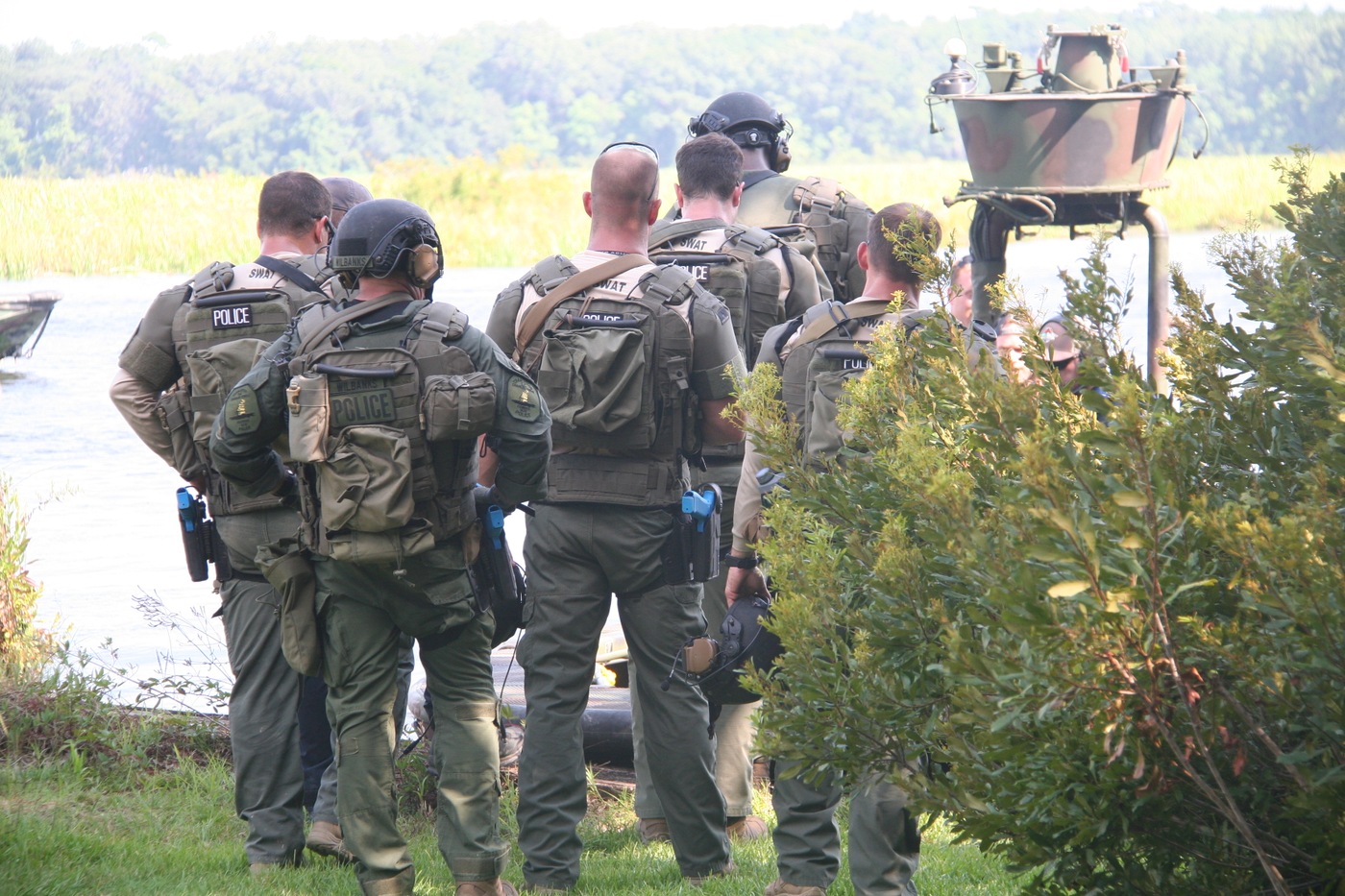 According to the FBI's annual Crime in the United States report, both violent crime and property crime decreased in 2018 when compared to statistics from the previous year.