Italian Judge Assassinated by the Mafia 20 Years Ago 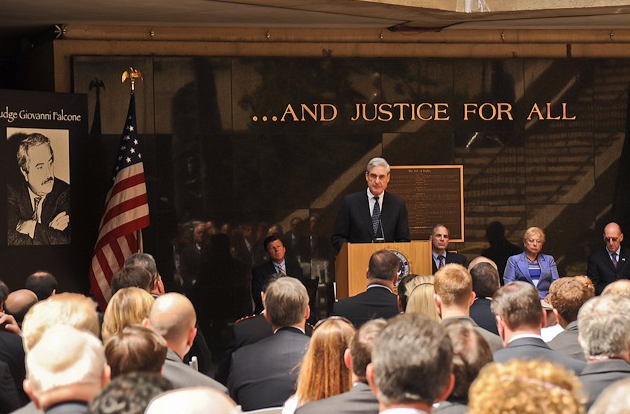 To mark the 20th anniversary of his murder, a tribute was held at FBI Headquarters to remember Falcone as a courageous opponent of the Mafia—and one of the earliest advocates of international cooperation in the fight against organized crime.

Director Robert S. Mueller, who was joined by two former FBI Directors and several Italian dignitaries in paying tribute to Falcone, noted, “Long before ‘globalization’ became part of our vernacular, Judge Falcone recognized that no one department or country could fight crime alone. He went to great lengths to cultivate strong relationships—friendships—with partners here in the United States and around the world.”

The FBI’s special relationship with Falcone was forged decades ago through two major cases in the U.S. and Italy at a time when the Mafia was powerful in both places. Louis Freeh, a federal prosecutor in New York City who would later become Director of the FBI, was cracking down on the Mafia. In a case known as the Pizza Connection, the FBI, the NYPD, and federal prosecutors teamed with Falcone and Italian authorities to bust an international heroin smuggling ring that laundered drug money through pizza parlors. The 1985 trial cemented Freeh and Falcone’s personal and professional relationships. At the same time in Italy, Falcone was prosecuting his own Mafia trial—the Maxi Trial—which put hundreds of mafiosi behind bars.

Although the Mafia for years threatened Falcone and his family and assassinated his Italian colleagues, “he carried on,” said Michael Kortan, assistant director of the FBI’s Office of Public Affairs. “He was a champion of the rule of law.”

Freeh remembered that although Falcone’s life was under constant threat, he always felt safe in the U.S. surrounded by his American law enforcement colleagues. “He loved the FBI,” Freeh said, adding that the Mafia made a “serious miscalculation” by killing Falcone. Instead of intimidating the Italian police, they—and the FBI—“rallied to the investigation of his murder.”

After Falcone’s assassination, then-FBI Director William Sessions introduced the idea of a Falcone Memorial Garden at the FBI Academy in Quantico, Virginia. Two years later, then-Director Freeh saw the plan through and dedicated a bronze memorial to Falcone at Quantico.

Prosecutor Liliana Ferraro, a friend and colleague of Falcone who took his seat after his assassination, said, “The Italian police and the FBI continue to work closely together against common enemies. As they fight organized crime together, they still use many lessons from Falcone, such as the importance of international cooperation and the protection of key witnesses.”

She added that Falcone “believed in friendship, loyalty, justice, and cooperation. On those shared values, ​​we have developed a strong partnership that has enabled our countries to fight with success against organized crime and terrorism.”

“Judge Falcone always understood that there was strength in numbers,” Mueller said, “and that defeating the Mafia would require true solidarity. Due to his foresight, we have dealt a devastating blow to organized criminal syndicates.”

The relationships that Falcone forged years ago between the Italian National Police and the FBI “have borne tremendous fruit in this age of international crime and terrorism,” Mueller added. “Those friendships have set the standard for global cooperation among law enforcement.”

It was a gruesome and hateful crime—three men with white supremacist tattoos punching and kicking the face and body of an African-American man at a bus stop in Houston last summer simply because of the color of his skin. All three were recently convicted of the attack, following an investigation by the FBI and its partners.