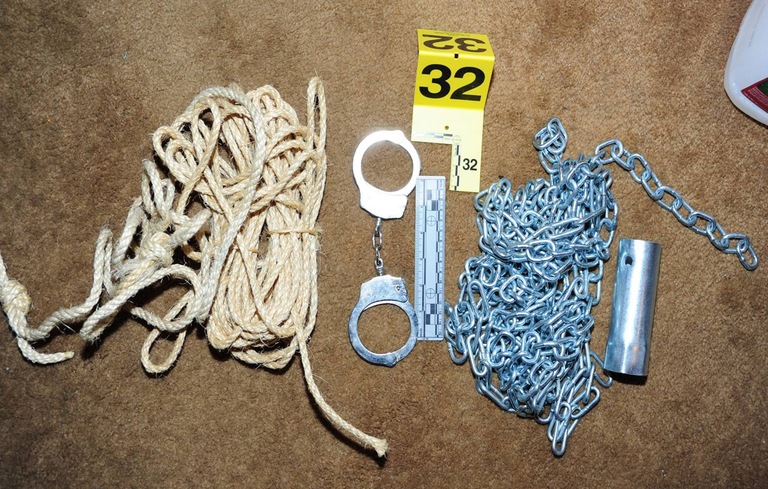 Evidence seized in the human trafficking case, such as these restraints, revealed that the subjects were fully prepared to buy kidnapped women and hold them against their will.

During the course of an international human trafficking investigation, FBI agents uncovered disturbing information: American men were making what appeared to be serious inquiries about buying kidnapped women from Asia to serve as sex and domestic slaves.

“This case opened people’s eyes to a much darker side of human trafficking than we were previously aware of,” said Special Agent Ryan Blay, who worked the investigation from the FBI’s Phoenix Division.

The case started in 2012, when agents were alerted to an advertisement from Malaysia on the now-defunct bondage website collarme.com, purporting to sell kidnapped Asian women “who are naturally very obedient.”

The online solicitation turned out to be a money-making scam, Blay said, but the response from potential customers in the U.S.—nearly 200 inquiries during a two-month period—was “alarming.” After the fraudulent advertisement was removed from the website and the FBI referred the matter to Malaysian authorities, Blay and his team devised an undercover operation targeting the same clientele.

“The idea was to be proactive, to identify these individuals and stop them before they could actually victimize anyone,” he said. The FBI created an undercover platform advertising kidnapped women for sale as sexual and domestic slaves.

“Almost immediately there were responses,” Blay said. “We weren’t interested in individuals who were just pursuing some sort of fantasy,” he explained. “The only people we wanted were those who were serious about buying kidnapped women.”

The undercover operative posing as the seller “actually tried to talk people out of it,” Blay said. “He stressed that these women would be taken against their will and the transaction would be illegal in every possible way.”

More than 100 people responded, and most dropped out quickly. But four individuals were anxious to proceed—and willing to pay thousands of dollars for a sex slave. “All of them said this was something they had wanted to do for a long time,” Blay said.

The undercover operative told the four buyers he was connected to a human trafficking group that would identify foreign females in the U.S. on temporary visas, kidnap them, and sell them into a life of slavery. The operative also said his organization held a biannual auction, where the women would be sold to the highest bidders.

The four individuals—two from Arizona, one from Montana, and one from California—were in their 50s and 60s. One was an engineer with a Top Secret government clearance. Another was a financial analyst. The Montana man was going to pay $10,000 for two women. When he flew to Phoenix in May 2014 to make the purchase, he was carrying u-bolts to bind the women’s wrists and gags to keep them quiet. He planned to transport them back to Montana in a recreational vehicle. The man told the undercover operative he had a fully functional dungeon in the basement of his home.

“When we eventually conducted searches,” Blay said, “all the subjects had basically manufactured rooms in their homes to be prison cells. There were bars on windows, obscured glass, and insulation so no one could see or hear the women from the outside. One guy bolted chains in the floorboards of a room.”

The four men were indicted on human trafficking charges between December 2013 and May 2014. They all pled guilty, and in September 2015, an Arizona federal judge sentenced them to prison terms ranging from seven to nine years.

“We are extremely pleased that we were able to intervene before any of these individuals was able to hurt anyone,” Blay said. “We didn’t want to wait until there were actual victims.”

Briefing announced the launch of a publication outlining the negative impacts of the illicit tobacco trade and the whole-of-government approach to combating it.

Director Comey testified before a Senate committee on the FBI’s programs, and AD Campbell briefed a House committee about online gambling and potential crime.