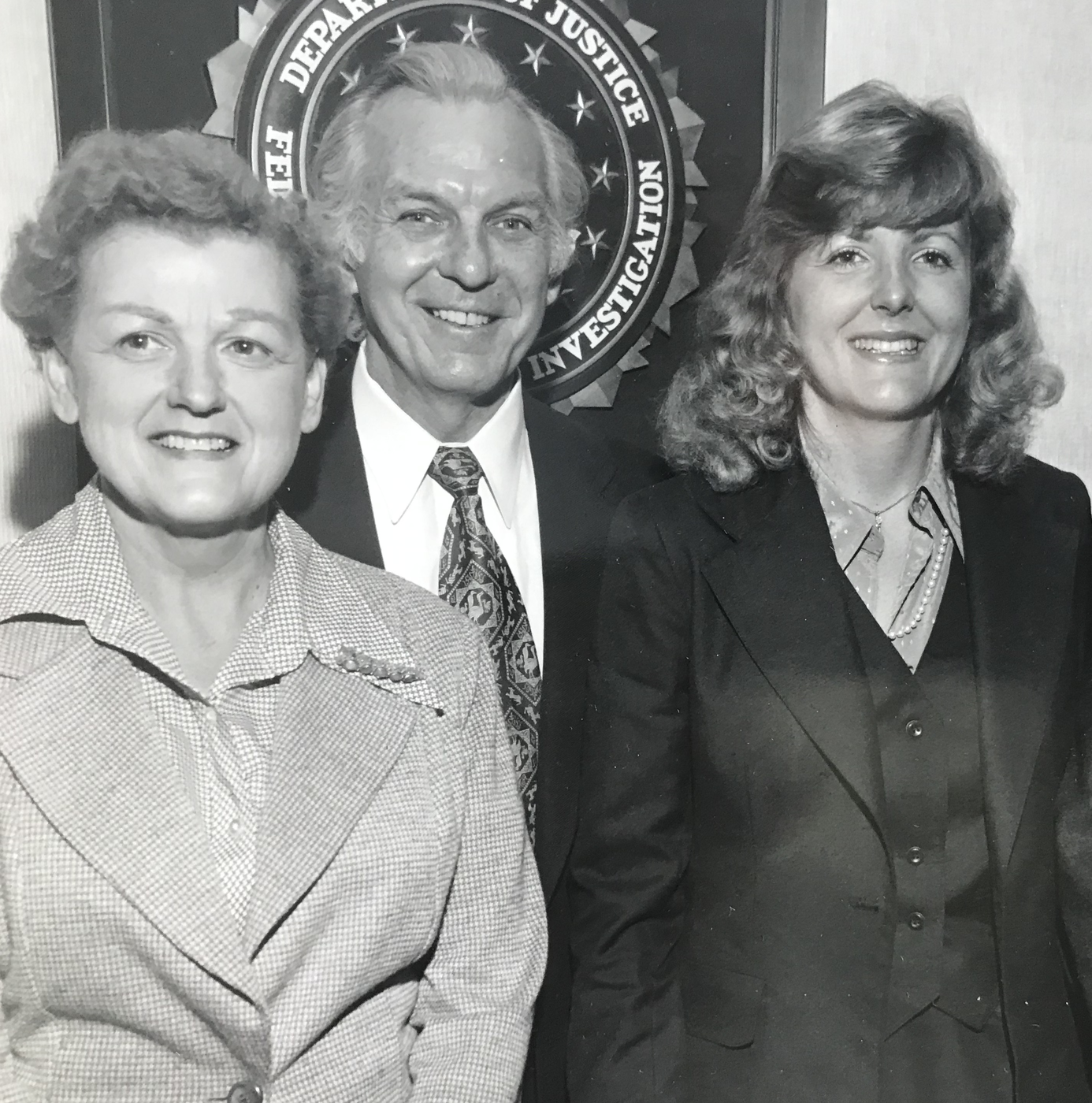 Paula Smith (right) with her parents at her FBI swearing-in ceremony.

As a child, Paula Smith spent countless hours in the store her grandmother owned, making change for customers—and eyeing the gun under the counter. “It was open late at night,” Paula said about the store, which had its share of robberies and break-ins. “That got me interested in law enforcement.”

Later in life, Paula dreamed of being an FBI agent but batted the idea away; women weren’t allowed to become special agents. So, Paula went to law school. She knew the FBI hired lawyers—even female ones.

But policies changed in 1972, and the FBI began accepting female agent applicants. Paula applied for the special agent job while continuing to pursue the legal work that never quite thrilled her.

Then, in the span of a week, Paula received three job offers: the Judge Advocate General’s Corps with the Navy; a position in her local district attorney’s office; and the FBI Academy to be a special agent. It didn’t take her long to decide.

Special Agent Paula Smith started in the San Francisco Division in 1980. Her early years were challenging. She was often the only female agent on her squad. Her motto was to stick with the work: “Once you do your work, they’d accept you,” she said.

While Paula was pursuing her dream at the FBI, her brother was pushing for a spot on a space mission, his own lifelong goal. After a series of setbacks and rejections, Steve Smith was accepted into the space program at NASA and flew aboard Space Shuttle Endeavor in September 1994.

Several months later, he was chosen for a mission to service the Hubble Space Telescope. Even more exciting, Steve would get to perform a spacewalk, the official term for leaving the shuttle and physically being out in space. 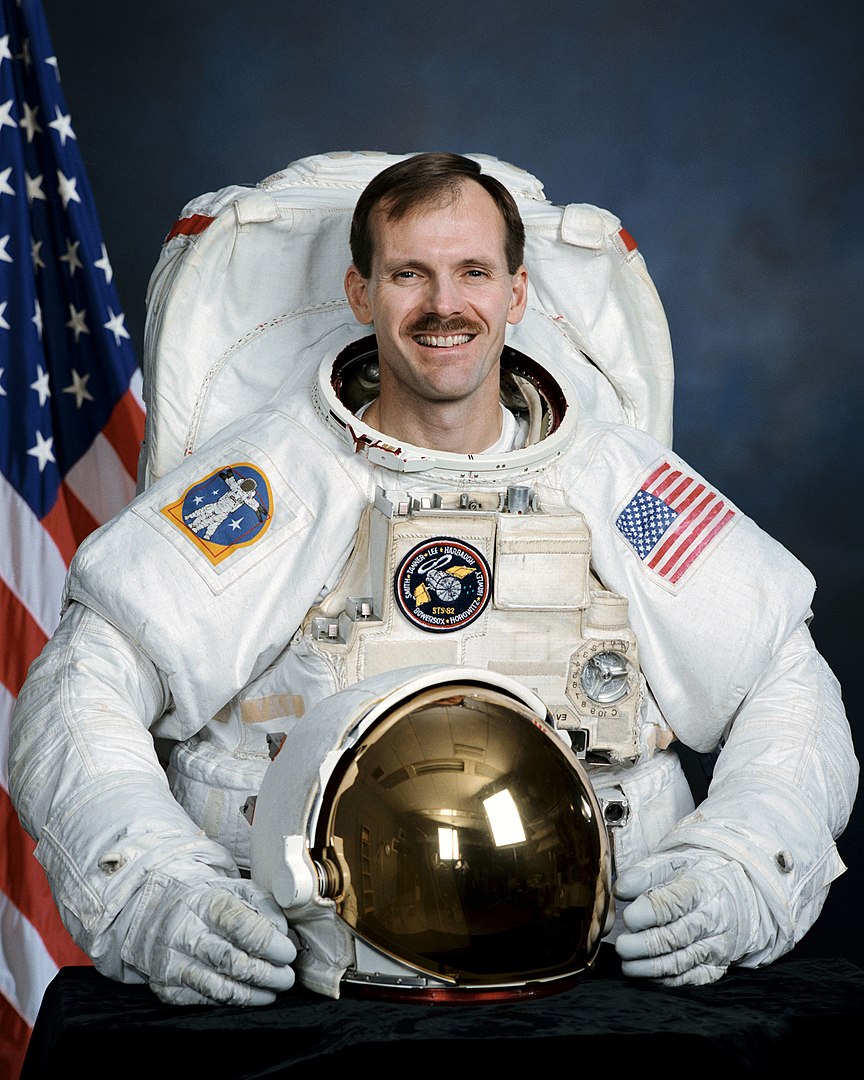 Astronauts may take five personal items to commemorate a mission, and Steve knew one item he wanted to take.

“To express my gratitude—not only to my sister for her great influence as a trailblazer and a person with grit and fortitude, but also to thank this great organization, the FBI—I decided to fly this FBI flag,” he said.

Paula worked at the Office of the General Counsel at FBI Headquarters at the time, and a colleague who ran the FBI Tour got a large flag for Paula to give Steve.

“Everyone thought it would be really cool,” said Paula.

On February 11, 1997, the Space Shuttle Discovery launched from Kennedy Space Center in Florida, the FBI flag safely in tow. Steve spent nearly 20 hours in space during the spacewalk—an experience he called “magical.”

The shuttle landed on February 21. Tradition holds that every astronaut autographs each personal item that traveled on the flight after landing. The signed flag was originally placed in a special section of the FBI Tour. Today, the flag hangs in the Director’s corridor at Headquarters, next to a certificate of authenticity and images from Steve’s flight.

“To express my gratitude—not only to my sister for her great influence as a trailblazer and a person with grit and fortitude, but also to thank this great organization, the FBI—I decided to fly this FBI flag.” 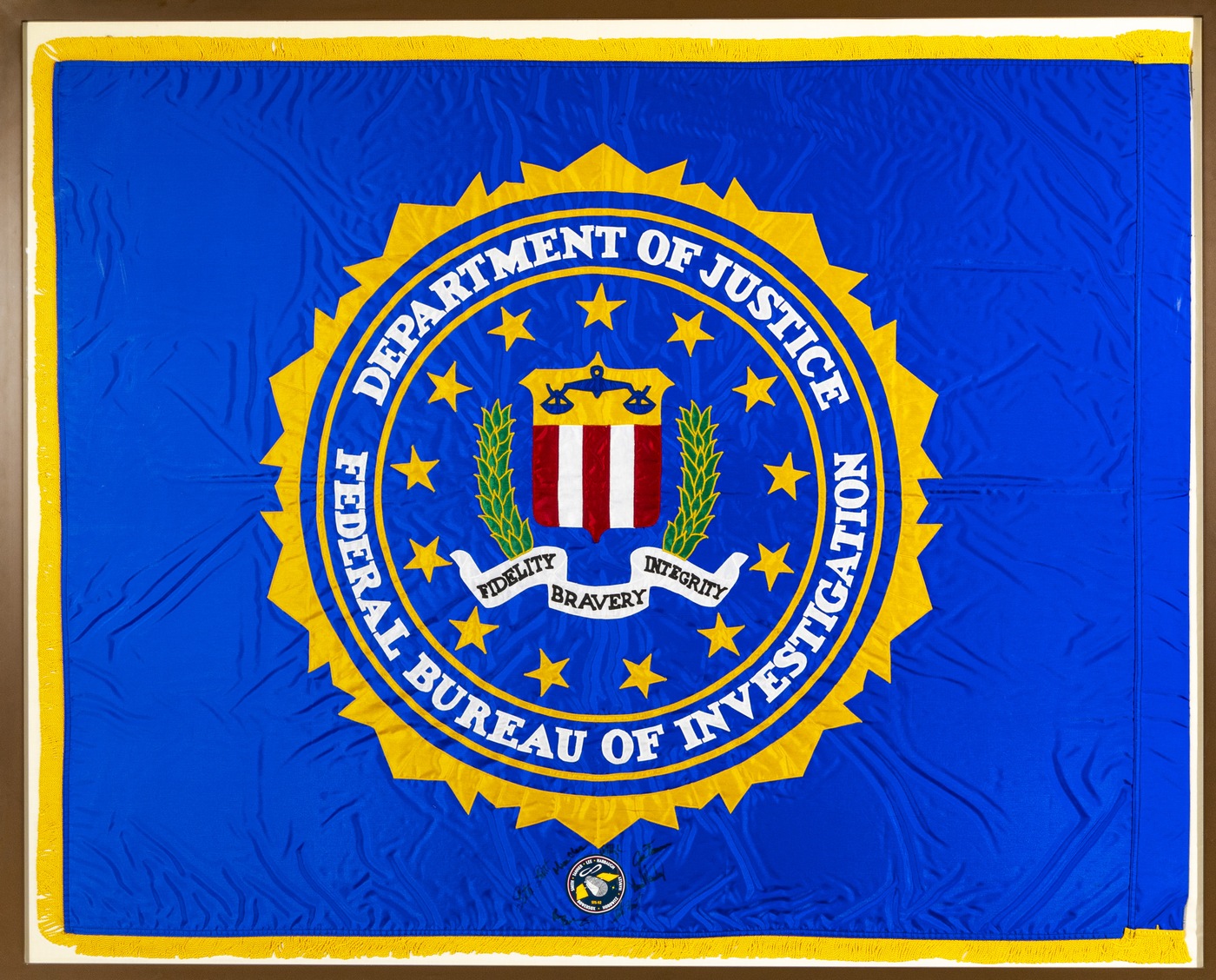 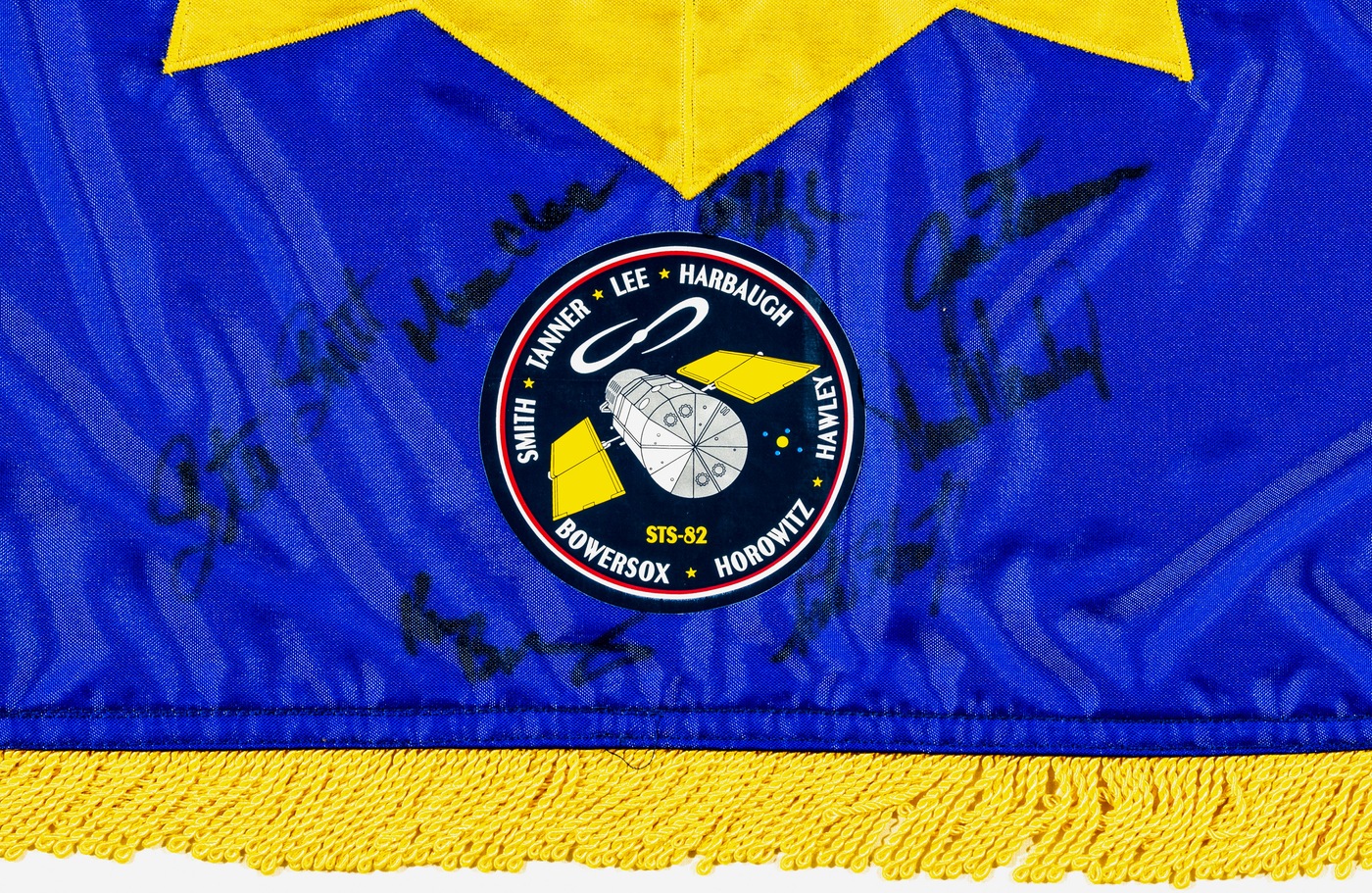 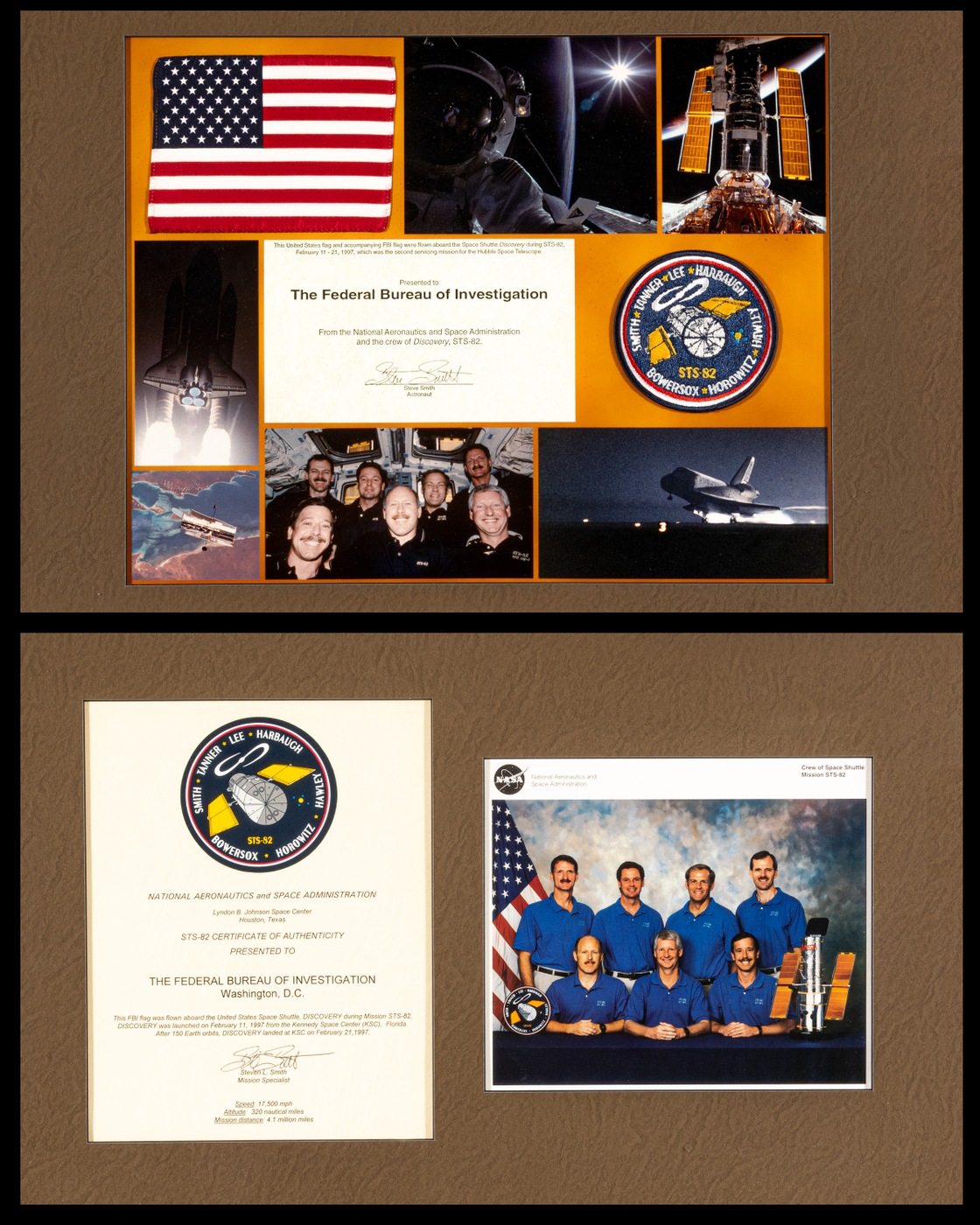 Top right: Two framed collages from the flight accompany a certificate of authenticity for the flag. Included is a U.S. flag patch that was also flown aboard STS-82. Top left: The only FBI flag flown in space. It now hangs in the Director’s corridor in FBI headquarters.  Bottom left: A seal from the space flight is attached to the FBI flag with autographs from each astronaut. Steve Smith’s signature is on the far left. Every space flight has its own uniquely designed seal.

Steve Smith wound up going to space two more times for a total of four missions. He ranks in the top 10 of astronauts who have spent the most time performing a spacewalk. He left the Astronaut Corps in 2003.

Paula’s career spanned several field office and Headquarters assignments, and she worked nearly every violation. Paula retired in 2005 as an assistant special agent in charge in San Francisco, the same office where her career started.

Over the years, she noticed a change in the agent ranks as more women agents joined—and were accepted. “It’s just like a whirlwind, a total opposite. I mean, we were strange when we first came in,” said Paula. But seeing more and more female agents throughout her career excited her.

Looking back, Paula and Steve often joke with one another about who had the better career. As with most sibling arguments, this one hasn’t been settled.

“For me, it is two of America’s best brands,” Steve said of NASA and the FBI.

Paula sees the FBI flag her brother flew as a potent symbol. “I thought it was a fantastic representation on achieving your dream and doing something for your country.” 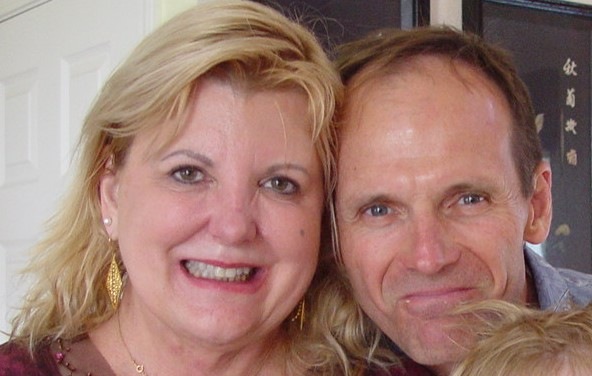 Director Christopher Wray recently visited the United Kingdom to meet with his counterparts.