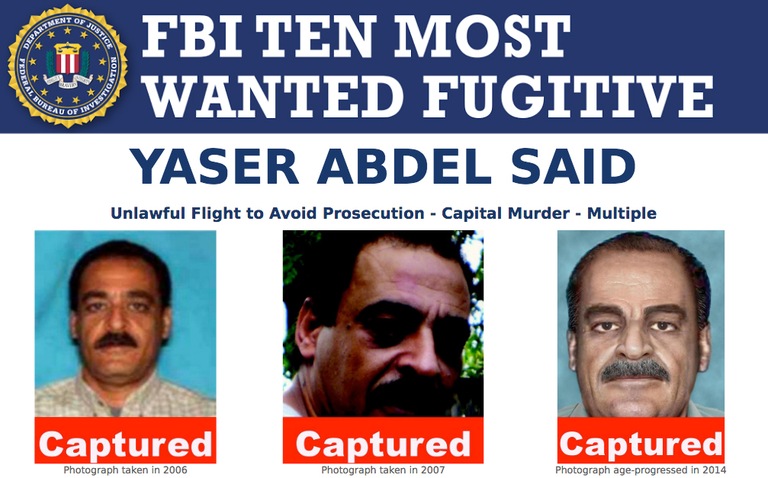 Yaser Abdel Said, wanted for the murder of his two teenage daughters in Texas, has been named to the Ten Most Wanted Fugitives list.

A reward of up to $100,000 is being offered for information leading directly to the arrest of Said, who was born in Egypt and may be hiding there or in U.S. communities with Egyptian ties.

On January 1, 2008, Said persuaded his estranged daughters—Amina, 18, and Sarah, 17—to visit him. He said he was going to take them to get something to eat. Instead, he allegedly drove them in his taxi cab to a remote location and used a handgun to murder them. One of the girls was able to make a 911 call and was heard screaming for help, saying she and her sister were being shot by their father. Their bodies were discovered several hours later in the cab, which was abandoned outside a hotel in Irving, Texas.

“Yaser Abdel Said is wanted for his alleged role in committing a terrible act of violence against his own daughters,” said Diego Rodriguez, special agent in charge of our Dallas Field Office. “Adding him to the Ten Most Wanted Fugitives list shows our commitment to seek justice for Amina and Sarah.”

Since the murders nearly seven years ago, the case has received widespread publicity, and law enforcement has followed every credible lead, but Said remains at large. Today’s announcement, Rodriguez noted, should draw increased attention to the case. “We believe that the combination of publicity, the significant reward, and the team of experienced investigators working the case from the Dallas Violent Crimes Task Force and the Irving Police Department will result in Said’s arrest.”

Special Agent Gil Balli, a task force supervisor who is leading the investigation, explained that “Said likely fled immediately after the murders. There have been many reports that he is in the U.S., but we are not ruling out the possibility that he is abroad.” Balli added that investigators are coordinating with law enforcement partners in Egypt and Canada along with U.S. law enforcement agencies.

The last confirmed sighting of Said, now age 57, was in Irving, Texas, in 2008. He is 6 feet 2 inches tall, weighs about 180 pounds, and has brown eyes, black hair, and possibly a thick moustache.

In addition to Egypt and Canada, investigators believe Said has ties to the Dallas-Fort Worth region and the New York City area. He frequents diners—including Denny’s and IHOP restaurants—smokes Marlboro Lights 100s cigarettes, and loves dogs, especially tan- and black-colored German Shepherds. He may be working as a taxi driver.

Said—the 504th person to be named to the FBI’s Ten Most Wanted Fugitives list since its creation in 1950—is considered armed and dangerous. He reportedly carries a weapon with him at all times.

We need your help: If you have information about Yaser Abdel Said, call 1-800-CALL-FBI, or contact your nearest law enforcement agency or U.S. Embassy or Consulate. You can also submit a tip online at tips.fbi.gov.

“These murders were brutal and cold-blooded,” Balli said. “If a person is capable of killing his own daughters, there is no telling what he might do. We need to catch this individual and prevent him from harming anyone else.”