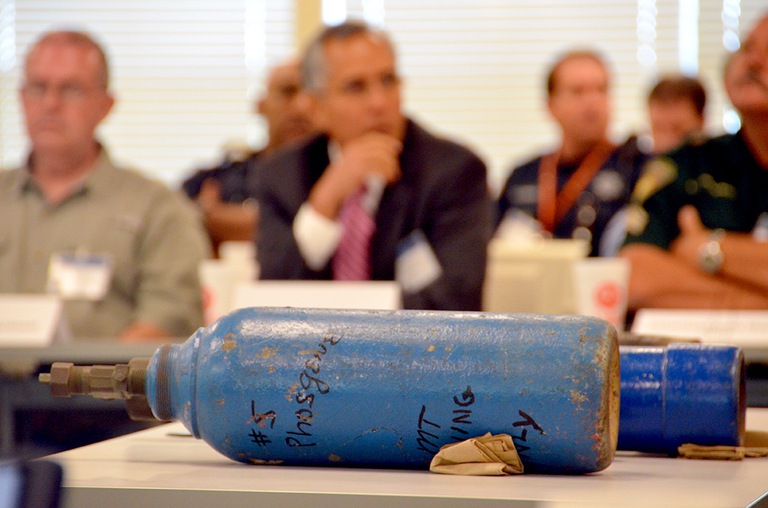 Chemical storage tanks provided a visual aid during an FBI-led exercise in Houston designed to test emergency responders in the event of a chemical attack.

When the facility manager for a hazardous waste disposal company near Houston took his seat at the table with law enforcement officials and emergency first responders, he knew it was going to be a very bad day. In the coming hours, his facility would experience a break-in, a fire, and the theft of a chemical agent that would be intentionally released at a popular waterfront amusement park, sending a poisonous plume across the region.

The fictional worst-case scenario was designed by the FBI’s Chemical Countermeasures Unit—part of our Weapons of Mass Destruction (WMD) Directorate—to shake out any weaknesses in the region’s elaborate network of emergency responders. The daylong exercise, attended by more than two dozen local, state, and federal agencies, raised all the tangly issues that come up in real catastrophic events: Who has jurisdiction? Who is the lead investigative agency? Who is qualified to appropriately respond?

“It’s an excellent opportunity for everybody to get together and learn what each other’s capabilities are,” said Special Agent Amanda Koldjeski, a WMD coordinator in the FBI’s Houston Division, which hosted the training event in October as part of the Bureau’s ongoing effort to reach out to first responders and high-risk chemical facility operators about potential threats in their areas.

The exercise also showed how private industry has an important seat at the table in dynamic events like this, since they know their materials and vulnerabilities better than anyone else, and they are most likely to be the first to recognize suspicious activity related to their own operations.

“As a manager you never want to be responsible for something like this going on,” said Bruce Shelton, manager of the waste disposal site in La Porte, just outside of Houston, that was targeted in the exercise (the Houston area is home to the largest concentration of chemical facilities in the U.S.). “But I know that we absolutely need to be in contact with our local emergency planning folks in this type of environment, because we don’t know what’s going to happen tomorrow.”

In the scenario, things go from bad to worse very quickly, and agency representatives are confronted with real-time questions about how they will respond in what is emerging as an act of domestic terrorism. Who is the incident commander? Is this an ongoing attack? Are we evacuating? Are your people trained to operate in personal protective equipment? Do they have access to that equipment? Knowing the roles and skills of all parties in advance can reduce confusion in a real incident, whether it’s a terrorist attack or an accident.

“We have a lot of incidents that happen in this part of the country, so I think it’s good for us to review those so we hopefully limit the number of potential mistakes,” said Mark Sloan, coordinator of the Harris County Office of Homeland Security and Emergency Management. “Any time you get face time with your partners, it’s going to benefit you when you meet at 2 a.m. and say, ‘Hi, what resources do we have available to us?’” 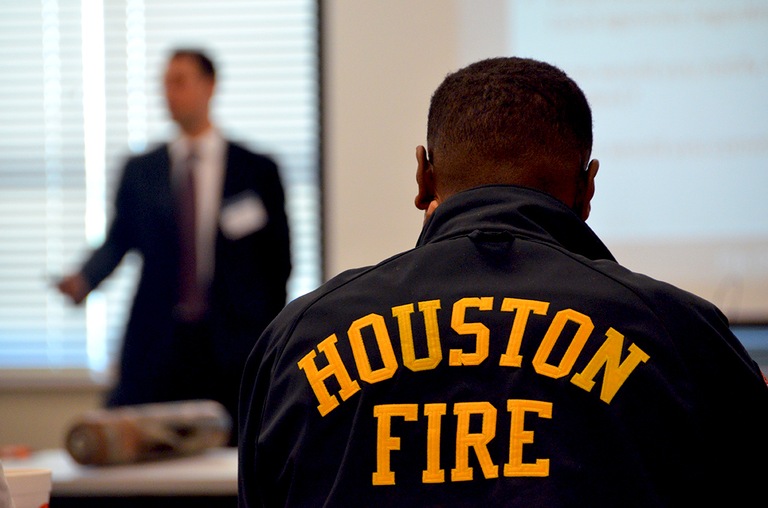 The exercise in Houston brought together agencies from the federal, state, and local levels, including the Department of Homeland Security and the Drug Enforcement Agency. “Any time you get face time with your partners, it’s going to benefit you,” said one of the participants.

Each of the FBI’s 56 field offices has at least one WMD coordinator whose job includes establishing relationships with local partner agencies and private companies to prevent WMD attacks. In making the rounds, the coordinators share prevailing threats and become key points of contact when a suspicious incident arises in the WMD arena.

“Our WMD coordinators are the face of the Bureau when they go out and meet the locals,” said Chris Freeze, assistant special agent in charge of the Houston Division, who participated in the exercise.

Bruce Shelton, the facility manager, had never dealt with most of the individuals or agencies that participated in the exercise. Seeing the response unfold in front of him gave him a fresh perspective on his own role in securing his site and helping in a coordinated response.

“There are a lot of resources out there that I haven’t used until now,” he said after the scenario concluded. “It’s good to know where they’re at and who they are.”

The FBI’s WMD countermeasures program consists of outreach activities and the establishment of tripwires. Put simply, countermeasures are actions taken to counter, detect, eliminate, or offset the WMD threat. Tripwires, meanwhile, are the formal mechanism put in place to facilitate reporting of potential WMD threats. Tripwires establish an early warning network of WMD threats with FBI partners who are in the best position to report, such as state and local public health, academic researchers, and members of industry.