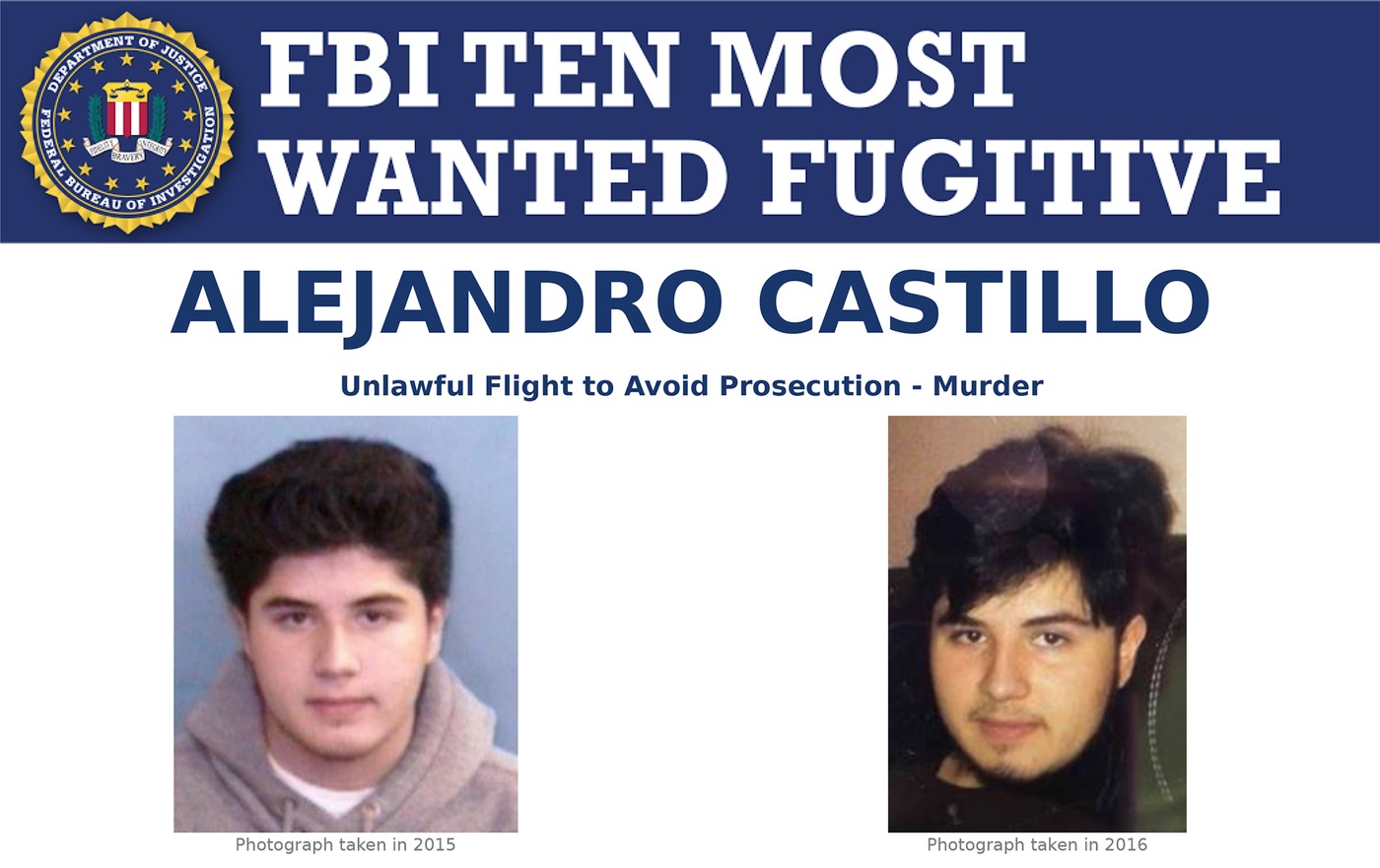 A North Carolina teen charged with murdering his former girlfriend has been named to the FBI’s Ten Most Wanted Fugitives list, and a reward of up to $100,000 is being offered for information leading to his capture.

Alejandro Castillo—17 years old at the time of the killing—is wanted in connection with the 2016 murder of a 23-year-old woman, Truc Quan “Sandy” Ly Le, whom he had previously dated. The two became acquainted while working together in a Charlotte restaurant.

A joint investigation by the FBI and the Charlotte-Mecklenburg Police Department (CMPD) revealed that Castillo owed the victim money—approximately $1,000. Text messages between Castillo and the victim showed they agreed to meet in Charlotte on August 9, 2016, so he could repay the loan.

U.S. Customs and Border Protection surveillance video of Alejandro Castillo (gray shirt and black hat) and his accomplice (black and white top, shorts) crossing the border from Nogales, Arizona into Mexico on August 16, 2016, just after 9:00 p.m. Castillo has been added to the FBI's Ten Most Wanted Fugitives List in connection with the murder of a woman in Charlotte, North Carolina, and a reward of up to $100,000 is available for information leading directly to his arrest.

When the victim arrived at the meeting place that evening, Castillo apparently had no intention of returning the money. Instead, according to CMPD Det. Brent Koeck, Castillo had the victim withdraw a large sum of money from an ATM. Investigators believe Castillo drove the woman to a remote, heavily wooded area outside Charlotte, where she was shot in the head and her body dumped in a ravine. Castillo and his new girlfriend then fled the state in the victim’s car.

The families of the victim, Castillo, and his accomplice all filed missing persons reports with the police when their children did not return home, and it took a week before the victim’s body was found and identified. The victim’s vehicle was located after the murder by the FBI’s Phoenix Division at a bus station in Arizona.

Castillo and his accomplice had driven to Arizona and then crossed the border in Nogales into Mexico. Two months after the homicide, the woman who was with Castillo turned herself in to Mexican authorities and is now back in North Carolina facing charges related to the homicide. Castillo remains at large, and investigators believe he may be in the cities of Pabellón de Arteaga or San Francisco de los Romo, in the Mexican state of Aguascalientes. He may have also traveled to the Mexican states of Guanajuato or Veracruz. He is a fluent Spanish speaker.

“The FBI has a long reach, and no matter where he is, we will not rest until Castillo is captured and brought to justice.”

Castillo has been charged with murder in North Carolina, and in February 2017 he was charged federally with unlawful flight to avoid prosecution.

“This crime was horrific,” said Special Agent Marc Weingrad of the FBI’s Charlotte Division. “Sandy was an innocent woman who was shot in the head.” Weingrad believes the significant reward in the case—tipsters can remain anonymous and still be eligible for the reward—will motivate someone to come forward.

“The FBI has a long reach, and no matter where he is, we will not rest until Castillo is captured and brought to justice,” Weingrad added.

Castillo is considered armed and dangerous. If you have information regarding Castillo, contact your local FBI office or the nearest U.S. Embassy or Consulate, or submit a tip online at https://tips.fbi.gov.