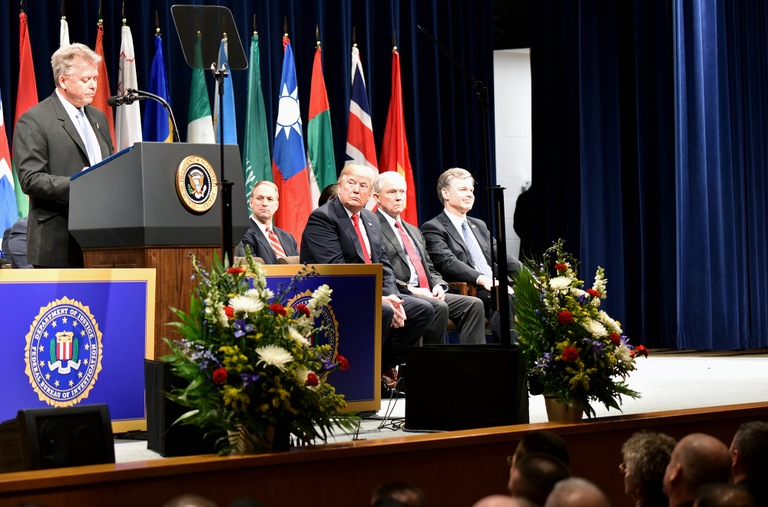 The FBI’s National Academy—a prestigious 11-week educational program for law enforcement officers from around the world—graduated its 270th class today, and on hand to congratulate the graduates were Director Christopher Wray, Attorney General Jeff Sessions, and President Donald Trump.

“I’d like to extend a special welcome to President Trump and Attorney General Sessions,” Wray said, addressing the 222 students in this session’s class, who represent 49 U.S. states, 20 countries, four federal agencies, and three branches of the U.S. military.

Founded in 1935, the National Academy program offers mid-career law enforcement leaders an advanced training program at Quantico, Virginia, the same location where the FBI trains its agents. National Academy students take courses in subjects ranging from behavioral science to counterterrorism to intelligence theory and engage in intense physical training. Just as importantly, they network with their peers.

Forging friendships and partnerships, Wray said, “is what the National Academy does best. As the world becomes smaller and perils loom larger, we’ve learned that a threat to one of us can be a threat to all of us. We’ve learned that working together isn’t just the best option, it’s really the only option.”

In welcoming Trump, Wray noted that it has been 46 years since a U.S. commander in chief participated in a National Academy graduation. “Mr. President, there is no better place to talk about the importance of partnerships than here at the National Academy, surrounded by some of the finest law enforcement leaders from here at home and around the world.”

“It is an honor to join you today and to stand with the incredible men and women of law enforcement,” Trump said during his remarks. “I am here not only to congratulate you, but to honor you for your courage and devotion.”

“It is an honor to join you today and to stand with the incredible men and women of law enforcement.”

In addition to thanking the many family members in the audience, the president said, “Now, more than ever, we must support the men and women in blue.” Trump addressed a number of issues related to policing and national security and said the Department of Justice has announced more than $98 million in grant funding to help local police departments hire new officers. “If we want to bring down violent crime,” he said, “then we must stand up for our police.”

Wray noted that last February, the president addressed the Major County Sheriffs Association, calling for a national partnership and a new beginning between law enforcement and the citizens they serve. “By joining us today,” he said, the president is “renewing that call.”

Trump also recognized the National Academy’s class president and spokesman, Drug Enforcement Administration officer Craig Wiles, whose father graduated from the National Academy 40 years ago and was in the audience today for his son. Wiles reminded the graduates and their families that “evil lives around the world,” noting that during his session’s nearly 11 weeks at Quantico, 24 law enforcement officers lost their lives, several terror attacks occurred in the U.S., and 10,000 individuals died of drug overdoses.

But Wiles remained hopeful. Based on his experience at the National Academy, he said, “I have never been more enthusiastic and optimistic about the future of the law enforcement community.” He added, “There is no greater calling than this honorable profession.”

When white-collar criminals exploit trusting members of their church or social circle, it’s called affinity fraud. In Utah, a law enforcement partnership is working to educate the public about these costly scams.

The FBI has released details on more than 6 million criminal offenses reported by law enforcement agencies around the country to the National Incident-Based Reporting System (NIBRS) in 2016.