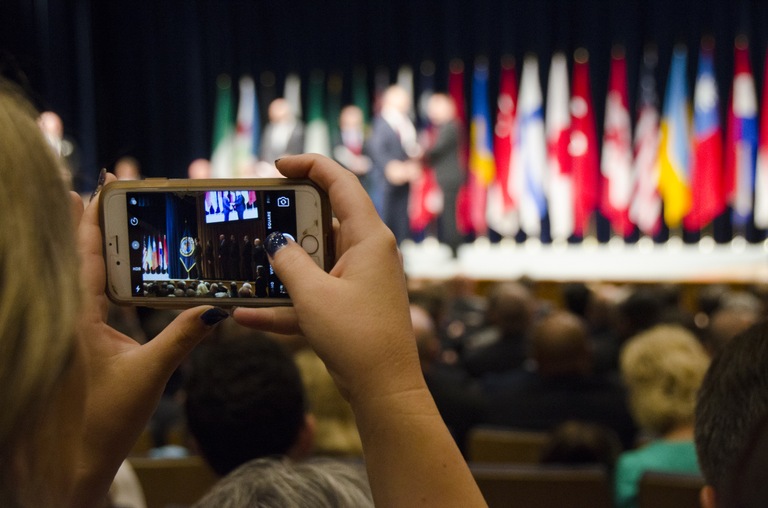 An attendee at the June 7, 2017 graduation of the 268th National Academy class takes pictures of the commencement ceremony, which featured the academy's 50,000th graduate.

The academy, located in Quantico, Virginia, where the Bureau also trains its new agents, opened in 1935 and graduated its 268th session on June 7. Among the 228 graduates—which included students from 47 states, 24 countries, seven federal agencies, and every branch of the military—was a University of Alabama at Birmingham Police Department captain accepting the academy’s 50,000th diploma.

“Surreal is the best way to describe it,” said Capt. Amy Schreiner, who learned only moments before receiving her certificate that she was the milestone graduate. “This just starts the next chapter of my career,” she said. “And I want to take the lessons that I’ve learned here—and the relationships that I’ve made here—and extend those to further my career.”

Capt. Amy C. Schreiner, of the University of Alabama at Birmingham Police Department, is the 50,000th graduate of the FBI National Academy, a 10-week professional course of study designed for law enforcement leaders in the U.S. and around the world.

The 10-week program is grounded in fully accredited academics, with leading-edge practical coursework in a broad array of subjects: intelligence theory, terrorist mindsets, management science, law, behavioral science, forensic science, and the media, to name a few. The students earned more than 3,800 combined credit hours since arriving at Quantico in early April. Students are also tested physically with frequent and taxing workouts, a refreshing change for many of the mid-career officers who have ascended the ranks in their departments and are no longer on a beat. The most valued thing students take from the academy, however, is the round-the-clock time spent with more than 200 colleagues with varied backgrounds, languages, and personalities but a common goal.

“Building partnerships and networks is what the National Academy does best.”

“Building partnerships and networks is what the National Academy does best,” said Joshua Skule, executive assistant director of the FBI’s Intelligence Branch, during the commencement address. Skule talked candidly about the Bureau’s priorities and the difficult work of combating terrorists and spies. The National Academy, he said, is integral to building an international bulwark against common threats.

“If we are to succeed in stopping their networks, we need to strengthen our networks,” Skule said.

John Russo, chief of the Rutherford Police Department in New Jersey, spoke on behalf of his class of graduates during the commencement. "This is the highest honor of my career," he said. "And it's been my privilege to work alongside each member of this session."

Like his classmates, Russo plans to take the best practices he learned over the past 10 weeks and apply them in his own department, which benefits not only his community at home but the FBI as well, since the Bureau’s biggest asset is local partners. 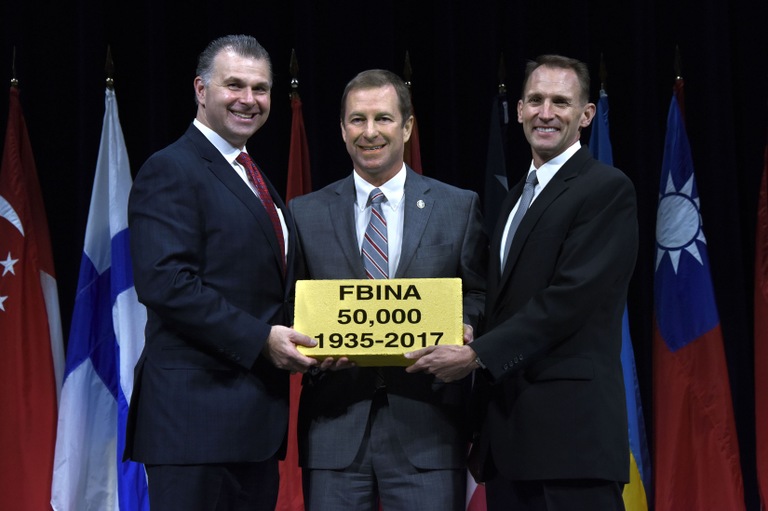 The inclusion of international students dates back to the academy’s beginnings but expanded in earnest in the early 1960s, when President Kennedy signed National Security Action Memorandum No. 177 to enhance the training of overseas officers in the United States. To date, students from 171 countries have gone through the National Academy, and today, at least 10 percent of each class is made up of international students. Recent graduates hailed from every corner of the globe, including Finland, Japan, Liberia, New Zealand, Thailand, and Albania.

“The men and women graduating here today are the result of the continuous commitment to get better at what we do, working side by side while building friendships,” said David Resch, assistant director of the Bureau’s Training Division, which oversees the National Academy.

Capt. Schreiner echoed those comments after the ceremony and a succession of high-fives and fist bumps with classmates filing out of the Quantico auditorium to meet family members—some they had not seen in months. The captain posed for pictures alongside the president of the National Academy Associates as they held a large yellow brick commemorating the 50,000 milestone and the academy’s culminating physical achievement, a storied and grueling 10-kilometer obstacle course called the Yellow Brick Road.

“The connections I’ve made here will be lifelong,” Schreiner said. “It’s a very exciting day but it’s also bittersweet because I hate to leave them all. But I know we’ll see each other again.”

“The connections I’ve made here will be lifelong.”

The FBI National Academy is a professional course of study for U.S. and international law enforcement managers nominated by their agency heads because of demonstrated leadership qualities…

A federal judge sentenced a gang member to prison for killing a transgender girl, the first time a federal hate crime law has been used for the death of a transgender victim.

The case of a Romanian man who was recently sentenced to four years in prison for his role in an ATM skimming conspiracy illustrates how the public is vulnerable to this type of crime.