FBI Director James B. Comey called on the nation’s law enforcement personnel and the citizens they serve to participate in a frank and open conversation about the disconnect that exists in places like New York City and Ferguson, Missouri—and many communities across the country—between police agencies and many citizens, particularly in communities of color.

In a speech today at Georgetown University, Comey said the lethal police encounters involving Michael Brown and Eric Garner—both African-Americans—the ensuing protests across the country, and the assassinations of New York Police Department Officers Wenjian Liu and Rafael Ramos have put the fundamental relationship between police and their constituents at a crossroads.

“As a society, we can choose to live our everyday lives, raising our families and going to work, hoping someone, somewhere, will do something to ease the tension,” Comey said to the Georgetown students and faculty. “We can turn up the music on the car radio and drive around these problems. Or we can choose to have an open and honest discussion about what our relationship is today—what it should be, what it could be, and what it needs to be—if we took more time to better understand one another.”

The speech, entitled “Hard Truths: Law Enforcement and Race,” sought to move the ongoing debate about race and the character of law enforcement officers to a more productive footing, where police and citizens acknowledge a few elemental “truths” in an effort to better understand each other. The Director began by acknowledging law enforcement’s own spotty history, including police bias a century ago against Irish immigrants—from whom Comey descended—and the FBI’s surveillance of civil rights leader Dr. Martin Luther King, Jr. 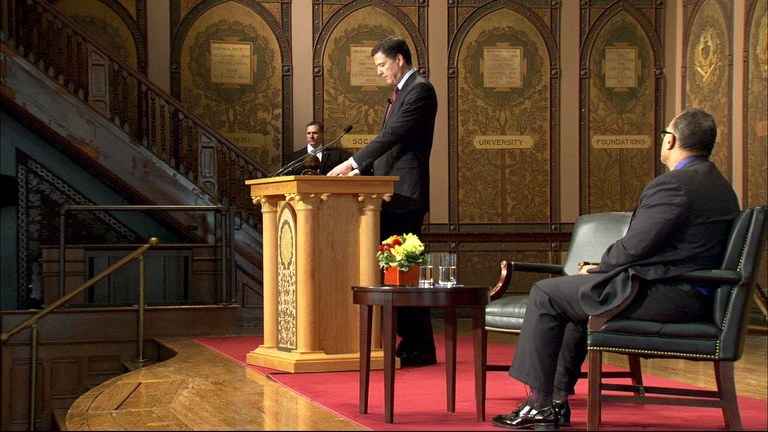 Comey then raised the subject of the unconscious racial bias within all of us, but said it’s how we behave in response to it that defines us. He said racial bias is no more prevalent in law enforcement than anywhere else. “In fact,” he said, “I believe law enforcement overwhelmingly attracts people who want to do good for a living. They don’t sign up to be cops in New York or Chicago of L.A. because they want to help white people or black people or Hispanic people or Asian people. They sign up because they want to help all people.”

That being said, many police over time develop different flavors of cynicism—lazy mental shortcuts, Comey said, that we have to resist because they can lead to over-generalizing. “We need to come to grips with the fact that this behavior complicates the relationship between police and the communities they serve.”

Still another hard truth, Comey added, is the recognition and need to address the disproportionate challenges faced by young black men in struggling communities—inadequate education, jobs, and role models. Too often, he said, they inherit a legacy of crime and prison. “Changing that legacy is a challenge so enormous and so complicated that it is, unfortunately, easier to talk only about the cops,” Comey said. “And that’s not fair.”

Comey said law enforcement needs to better “see” the people they serve. And to that end, he is urging police departments to provide the FBI, through our Uniform Crime Reporting Program, with better, more complete data, such as demographics and circumstances, which could shine more light on incidents where force is used by police or against them.

But the “seeing” needs to flow both ways. Citizens need to understand the difficult and perilous work of law enforcement. “If they take the time to do that, what they will see are officers who are human, who are overwhelmingly doing the right thing for the right reasons,” he said.

“We all need to talk and we all need to listen,” Comey said in closing, “not just about easy things but about hard things, too. It is time to start seeing one another for who and what we really are.”

Scammers May Use Paris Terrorist Attack to Solicit Fraudulent Donations

FBI warns the public about the potential for fraudulent solicitations of donations for victims after the Charlie Hebdo terrorist attack.