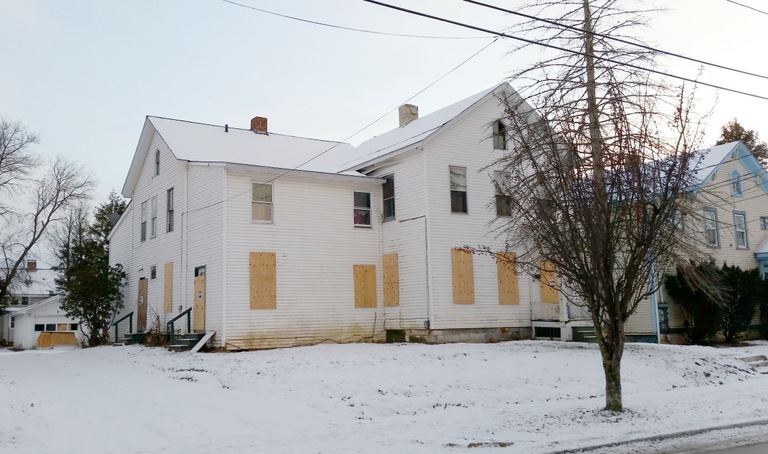 Shown is one of the Rutland, Vermont, properties used as a drug house that was seized through the civil forfeiture process and returned to the Rutland community, where it will be rehabilitated for families.

Last fall, the U.S. Attorney’s Office in Vermont held a press conference and issued a press release announcing that “the government and its public and private partners have completed an agreement to convert forfeited Rutland drug houses to safe, renovated houses.”

So what’s the significance of that announcement? The legal forfeiture action it referred to grew out of a multi-agency law enforcement investigation into heroin and crack cocaine dealers who were operating out of various residences on the same street in Rutland, Vermont, spreading their poison throughout the community. Seven subjects were ultimately sentenced to federal prison terms. But beyond that, through the civil forfeiture process, the government was able to take possession of the very properties that were used in the commission of these crimes and facilitate their return to the Rutland community victimized by the criminals.

The FBI was one of the agencies involved in this investigation, which is just one example of how we use the federal forfeiture provisions. Forfeiture in general as a law enforcement tool allows us to accomplish a number of goals—from disrupting and dismantling criminal and terrorist organizations and punishing criminals to compensating victims and protecting communities.

What exactly is forfeiture? In a nutshell, it’s the legal taking of property by the U.S. government because the property was either used in the facilitation of a federal crime or obtained through the illegal proceeds of a federal crime. The FBI, like other federal investigative agencies, began using forfeiture in earnest when Congress passed the Comprehensive Crime Control Act of 1984, which established the Department of Justice’s Assets Forfeiture Fund to receive and lawfully manage the proceeds of federal forfeitures.

What sort of items can be seized for forfeiture? Just about anything of value—including cash, financial accounts, securities, businesses, real estate, jewelry, professional licenses, antiques, artwork, lottery winnings, vehicles of all kinds, high-end electronics, and weapons.

Many—though not all—federal crimes have forfeiture provisions, but just about every law the FBI is charged with enforcing has some forfeiture aspect—from organized crime activities, financial frauds, drug trafficking, and cyber crimes to public corruption, child pornography, human trafficking, and terrorism. In all Bureau cases, the burden of proof to demonstrate that the property in question is forfeitable under the applicable federal law rests with the government.

There are two different kinds of forfeiture—criminal and civil.

In general, criminal forfeiture is an action brought against individuals as part of a criminal prosecution. Their illegal assets can be seized or frozen by the government, and then after a conviction or guilty plea, a forfeiture order is meted out during the sentencing of the defendant(s).

Civil forfeiture, on the other hand, is brought against property rather than the actual wrongdoer—it’s not dependent on a criminal prosecution, it’s based on the strength of the evidence at hand, it’s available whether the owner of the property is living or dead, and it allows us to obtain the assets of fugitives who have escaped the arm of the law or subjects who reside outside our borders.

Examples of Forfeiture in Action

Criminal and/or civil forfeiture actions are often a vital part of FBI cases. Here are a few examples:

There are two kinds of civil forfeiture: administrative forfeiture that generally involves property worth less than $500,000, and judicial forfeiture that can be of any value but generally involves property worth more than $500,000. But criminal and civil forfeiture aren’t mutually exclusive. In some instances, the FBI—in conjunction with U.S. Attorney’s Office—will run parallel criminal and civil forfeiture cases. There are several reasons for this. Parallel proceedings help us get the proceeds of a crime back to the victims more quickly. Also, if the case involves depreciating assets (like cars), we can civilly forfeit those assets faster than in the criminal proceeding, then liquidate the assets and get them back to the victim at a better return than if we had held the assets until the criminal case was completed. We also do parallel cases to ensure we can forfeit the assets civilly in case the defendant flees or dies before the forfeiture order is handed down.

Why use forfeiture at all? First of all, it deprives criminals of the illegal proceeds from their crimes. It helps dismantle criminal organizations and takes away the tools or instruments they use to commit their crimes, and also takes away the funds they use to operate. Forfeiture can also serve as a deterrent to others who might be considering criminal activities—is it worth the risk? And, it can compensate crime victims for the financial losses they suffered.

We’ve had a lot of success with forfeiture actions in terms of going after criminal enterprises, but our emphasis on compensating victims has paid off as well. In the past two fiscal years, FBI forfeitures—criminal and civil—have allowed the government to return more than $100 million to victims of crime following criminal restitution orders. And since fiscal year 2000, the Department of Justice as a whole has returned more than $4 billion in forfeited funds to crime victims.

A company that falsely claimed to be mining and processing a highly profitable type of coal used to manufacture silicon and computer electronics bilked more than 160 investors out of millions of dollars.