Investors Bilked out of Millions; 10 Fraudsters Sent to Prison 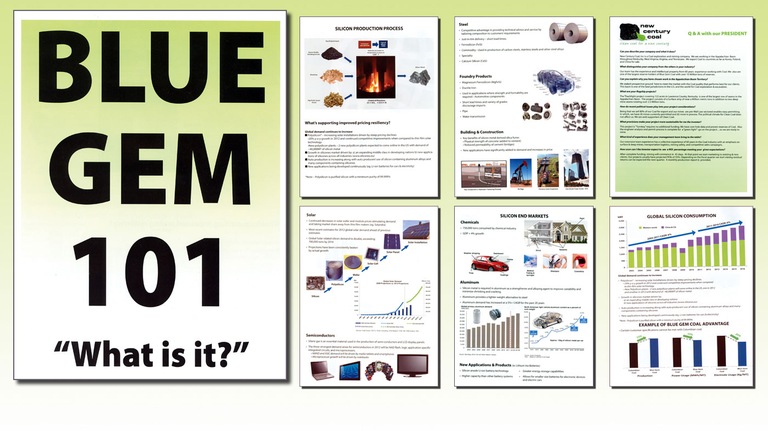 Salesmen from New Century Coal used sophisticated—but bogus—marketing brochures like the ones shown here to convince investors that the company owned mines that produced high-quality Blue Gem coal. But it was all a fraud, and investors lost millions of dollars.

Brian C. Rose ran a Tennessee company that claimed to be mining and processing a highly profitable type of coal used to manufacture silicon and computer electronics. On the basis of that claim, Rose and his employees raised more than $14 million from more than 160 investors—knowing all along that the only thing they were mining was their victims’ cash.

For more than three years beginning in 2011, Rose and his co-conspirators at New Century Coal sold shares in limited partnerships by convincing investors the company owned mines that produced high-quality Blue Gem coal—a scarce commodity that commands premium prices in the marketplace because of its use in computer semiconductors.

Thanks to sophisticated marketing brochures and presentations and a persuasive sales force that often traveled to meet with investors, the money started rolling in to New Century Coal. And Rose and his employees—including Rose’s father—were spending it as fast as they could on luxury lifestyles that included buying multiple homes, sports cars, thoroughbred horses, expensive trips to Las Vegas, and other extensive travel.

“The salespeople were very talented and very convincing,” O’Hare said. “Unfortunately, they knew they were involved in a scam and continued doing it.”

New Century Coal fooled some savvy investors, too, many of whom asked to see the mining operation in person before they put up as much as $2 million. Rose went so far as to lease mines and bring in earth-moving equipment, O’Hare explained. “But it was simply for show. The average investor couldn’t tell the difference between Blue Gem and regular coal. They assumed the operation was an ongoing, legitimate effort. But it was all a lie.”

After several years, the fraud scheme had grown so large—in excess of $14 million—that one of New Century Coal’s employees got cold feet and came to the FBI. “The person didn’t want to risk being a party to that kind of a fraud,” O’Hare said.

Special Agent Drew Scown opened the investigation into New Century Coal’s activity, and, in partnership with the U.S. Secret Service and the Internal Revenue Service, the fraudulent operation was shut down in June 2014. Not long after, Rose and nine others were indicted on a variety of counts of wire fraud, mail fraud, and money laundering.

As of last month, a federal judge in Tennessee had sentenced 10 individuals to a collective 284 months in prison for their roles in the New Century Coal scam. Rose, the ringleader, received a nine-year term.

O’Hare said some of the co-conspirators are currently under indictment in Indiana for a similar investment fraud. “These individuals,” he said, “had become highly effective and efficient in their schemes. They would start one, run it until the money ran dry, then start another one. They used aliases to conceal their true identity, and they stayed one step ahead of the law. It seems fraud is in their DNA.”

In addition to prison terms for the fraudsters, O’Hare added that investigators have so far been able to recover more than $3 million in assets that will be returned to the victims.

The FBI and its local, state, and federal law enforcement partners have been working hard to make sure the big game and the events leading up to it in Houston are without incident.

Forfeiture allows law enforcement to accomplish a number of goals—from disrupting and dismantling criminal and terrorist organizations and punishing criminals to compensating victims and protecting communities.