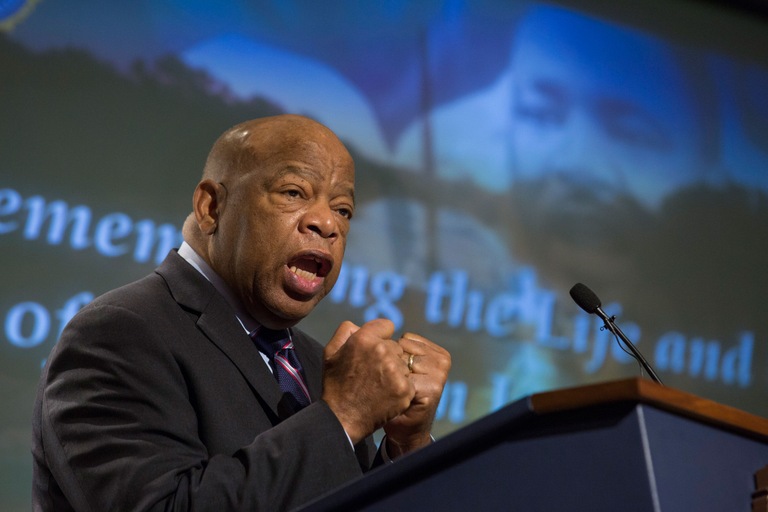 Introduced by FBI Director James Comey, Lewis—the son of sharecroppers—spoke of his childhood in rural Alabama and hearing his parents tell him “that’s the way it is” when he questioned signs that marked the water fountains and bathrooms African-Americans could use. “Don’t get in the way,” his parents cautioned their son. “Don’t get into trouble.” But according to Lewis, by 1955—when he was 15 years old—Dr. King and Rosa Parks “inspired me to find a way to get in the way.”

And over the next five decades, he found many nonviolent ways to combat racism and segregation—including taking part in lunch counter sit-ins, joining up with King and taking part in the Freedom Rides, speaking at the 1963 March on Washington, organizing the Selma to Montgomery March, and working toward the passage of the 1965 Voting Rights Act.

“Voting,” said Lewis, “is the most powerful nonviolent tool that we have, and everybody must use it to make the world a better place.”

During his remarks, Lewis appealed to FBI employees—who gave the congressman a rousing standing ovation—to “stand up, speak up, and speak out,” and that “we cannot afford to be silent.”

Forfeiture allows law enforcement to accomplish a number of goals—from disrupting and dismantling criminal and terrorist organizations and punishing criminals to compensating victims and protecting communities.

The owner of a debt collection company who used illegal and aggressive tactics to squeeze millions of dollars from thousands of victims is now paying his own debt—to society—in the form of a five-year prison sentence.