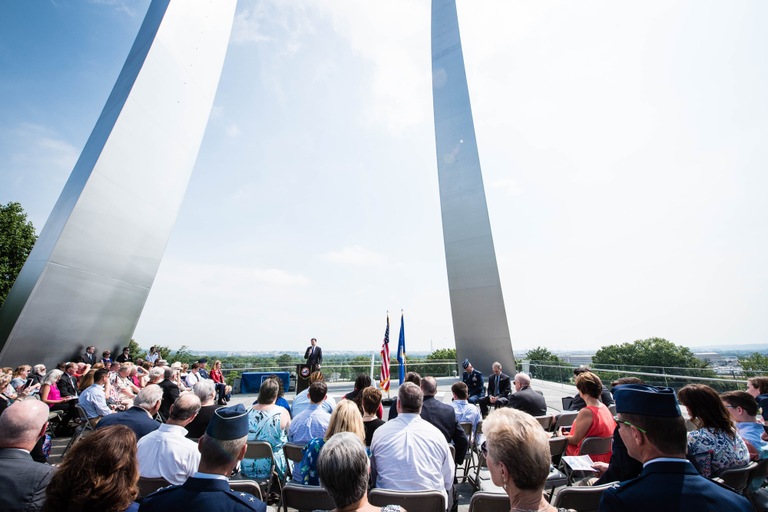 It was June 25, 1996 when a truck packed with 5,000 pounds of explosives detonated outside a U.S. military housing complex in Saudi Arabia, killing 19 service members and wounding hundreds more.

Today, FBI Director James Comey and former FBI Director Louis Freeh joined U.S. Air Force personnel and victims of the Khobar Towers attack during a remembrance ceremony at the United States Air Force Memorial in Arlington, Virginia. The event was organized by the Tragedy Assistance Program for Survivors, or TAPS.

Freeh, who was Director of the FBI when the terrorist attack occurred, recalled the dedication of FBI agents and personnel during the investigation, which is still ongoing.

“The FBI has left no stone unturned to find the people responsible,” said Freeh. “The need for justice is more powerful than it was 20 years ago, and it will be served.”

Five years after the Khobar Towers bombing, terrorism charges were brought against 13 members of the pro-Iran Saudi Hizballah, or “Party of God.” Those charges included conspiracy to kill Americans and employees of the United States, to use weapons of mass destruction, and to destroy U.S. property, as well as bombing and murder.

At the time of the indictments in 2001, Director Comey was serving as a prosecutor for the U.S. Attorney’s Office in the Eastern District of Virginia. Comey today underscored the Bureau’s commitment to the investigation.

“My association with this case has changed my life,” said Comey. “Our obligation is to make sure evil does not hold the field. We will pursue justice to our last breath.”

FBI Director Comey briefs the press about Hillary Clinton's use of a personal e-mail system.