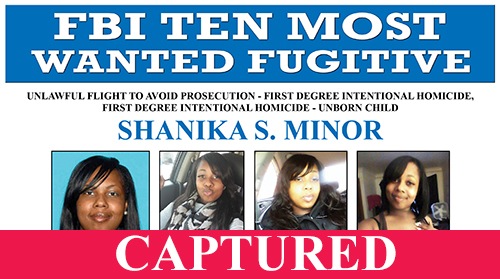 A Wisconsin woman charged with killing a pregnant woman and her unborn child has been named to the FBI’s Ten Most Wanted Fugitives list, and a reward of up to $100,000 is being offered for information leading to her capture.

Shanika S. Minor is wanted for the March 2016 murder of her mother’s neighbor in Milwaukee, a 23-year-old who was five days away from her due date. The shooting stemmed from an argument over loud music being played from the victim’s residence.

“Apparently Minor believed that the victim had somehow disrespected her or her mother,” said Special Agent Chad Piontek, who is investigating the case from the FBI’s Milwaukee Field Office. “It is a fairly violent neighborhood,” Piontek said. “Unfortunately, there is sometimes a street mentality about solving problems.”

According to witnesses, on March 5, 2016, Minor instigated an argument with her mother’s neighbor after Minor’s mother had previously said the neighbor was playing loud music at an unreasonable hour. On the sidewalk outside the victim’s residence, Minor brandished a handgun and challenged the neighbor—her former high school classmate—to fight. Minor’s mother ran to the scene and implored her daughter not to hurt the pregnant woman.

Minor fired a round from her gun into the air, got in her car and left the scene. “Most people who witnessed the incident thought that was the end of it,” Piontek said. But it was only the beginning.

Shortly before 3 a.m. the next morning, Minor returned to the neighborhood, gained access to the duplex her mother and the neighbor rented, and confronted the woman by the rear door of her residence. Minor’s mother again ran to the scene, this time positioning herself between her daughter and the neighbor, trying to keep the peace. Witnesses said Minor reached over her mother’s shoulder and fired her gun, striking the woman in the chest. The victim retreated into her residence, where she died in front of her two children. The unborn child also died.

Minor, 24, fled and has not been seen since. She has reportedly told acquaintances that she would not turn herself in. Minor may have contact with people in Missouri, Mississippi, Texas, Tennessee, Ohio, and Georgia. Other than delivering newspapers, “there is no record she had any reliable employment,” Piontek said. “I don’t think she has a lot of resources on her own. Clearly, people have assisted her.”

Minor might be receiving help from extended family members or a “network of friends,” Piontek said, adding that “such help is criminal, and individuals could be charged with aiding and abetting a fugitive.”

There is also a physical risk to anyone helping Minor. “The murder weapon was not recovered, and it is likely she is still armed,” Piontek said. “She killed someone who was not a stranger to her—a family acquaintance.” He added that the reward offer could motivate someone to come forward. “Our hope is that whoever is assisting her will find the potential reward more attractive than protecting a person wanted for first-degree murder.”

Minor is described as 5 feet 6 inches tall, having a medium build, and weighing 165 pounds. She has black hair and brown eyes. She should be considered armed and extremely dangerous.

“This was a senseless crime,” Piontek said, “and we believe Minor is capable of more violence. We need to capture her so that no one else is harmed.”

Anyone with information concerning Minor should contact the nearest FBI office or local law enforcement agency, or submit a tip online. The FBI’s Milwaukee Division can be reached by phone at (414) 276-4684.

Artists and anthropologists at the FBI Lab put a human face on unidentified remains.