Bringing the Light in the Darkest Hours 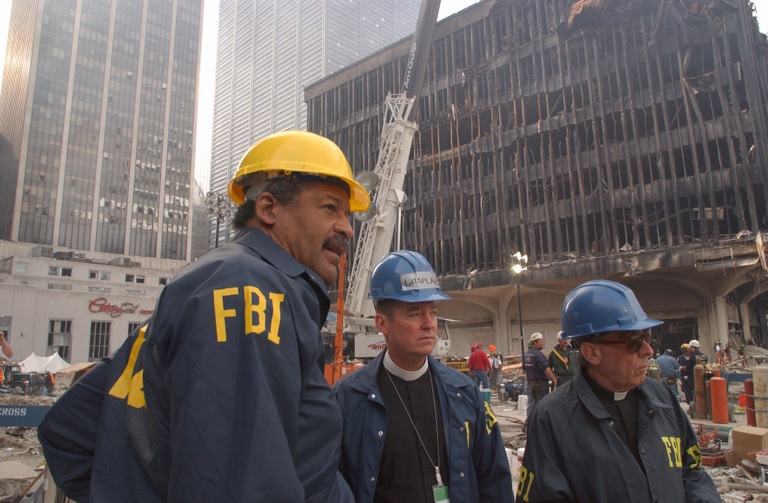 The FBI has deployed chaplains to crime scenes to provide support to employees since 1991. An FBI special agent (left) speaks to two FBI chaplains at Ground Zero in New York in 2001. Photo courtesy of FEMA.

FBI special agents and other Bureau professionals who respond to the bloody, chaotic scenes of mass casualties do so to help and to find answers: Who did it? How? Why?

And there are times when they can’t help but ask another question, one that does not have an easy answer.

“Sometimes the common question when facing such scenes is, ‘Why, God?’ ” said Gary Morefield, pastor of the GV Christian Center in Henderson, Nevada, just outside Las Vegas.

Morefield is one of about 130 FBI chaplains, part of a robust crisis intervention program that provides psychological first aid to FBI employees. The program also includes mental health professionals and specially trained peers.

Like other chaplains, those who work for the FBI are ordained clergy. Although some may lead a church, synagogue, or mosque, FBI chaplains provide spiritual support and guidance to a broader population in the Bureau. They are accessible to anyone, regardless of faith.

“Some people just feel better talking to a chaplain instead of a licensed clinician or a peer,” said Special Agent Paul Bertrand, a regional employee assistance program manager.

The FBI added volunteer chaplains to its roster in 1991, on the heels of a seminar that examined critical incidents involving the FBI. Seminar participants said FBI employees involved in shootings and who work gruesome scenes needed additional support beyond that provided by mental health professionals.

FBI chaplains are protected by workplace rules and have security clearances but are unpaid. Many are chaplains for other organizations or lead their own congregations. They do not proselytize during their work with the FBI.

Chaplains can help answer the deeper questions in the hearts of those who witness tragedy, differently from other trained professionals.

“Generally, my first response is, ‘I don’t know why this happened. I wish I knew. We may never know the answer,’ ” said Morefield, who is the FBI Las Vegas chaplain and who was on scene after the October 2017 Route 91 Harvest Music Festival shooting. “If I’m working with a person of faith, I would tell them, ‘I do know that God is here with us and hurting with you.’ ”

We know there’s a point at which people may need to talk to a mental health professional. But if needed, the chaplain can offer to provide the spiritual aspect with faith, with values, with meaning.”

Chaplains provide spiritual guidance when employees are facing personal tragedy or other difficulties. But they also deploy to mass casualty events along with special agents and other professionals. Their primary job during these events is to be present and available to anyone who needs them, on a strictly voluntary basis.

“The ministry of our presence is one of the most important things we can provide,” said FBI Houston Chaplain Naomi Paget, who deployed to mass casualty scenes in San Bernardino, California; Aurora, Colorado; and Newtown, Connecticut, as well as to New York City in the aftermath of 9/11. “People are looking for reassurance and comfort so they know they are not going through this all by themselves.”

Chaplains also undertake small jobs at a scene, like handing out water or meals. “It takes an emotional load off them,” said FBI Phoenix Chaplain Chad Goucher, who deployed to Las Vegas in the aftermath of the mass shooting. “A lot of time the people working these scenes forget—they forget they are hungry or they need water. The last person they are typically thinking about is themselves.”

Those small acts of kindness remind the responders to take care of themselves and that there is someone to talk to, said Chaplain Robert Hicks, assigned to the FBI’s Orlando Resident Agency. Hicks deployed to the Pulse Nightclub shooting in Orlando and other scenes.

“It also reminds them of their humanity,” Hicks said.

Chaplains say they do most of their counseling months after a crime scene is cleared. Most agents and professionals at a crime scene have learned to compartmentalize so they can focus on their work. They don’t have the time for distractions like speculating about the inhumanity of violence or good vs. evil.

“While you are working, it’s clinical,” a special agent from Kansas City said. “You look past the sights, the sounds, the smells, and you get the job done. But your mental bucket tends to fill up, and you need to process that.” 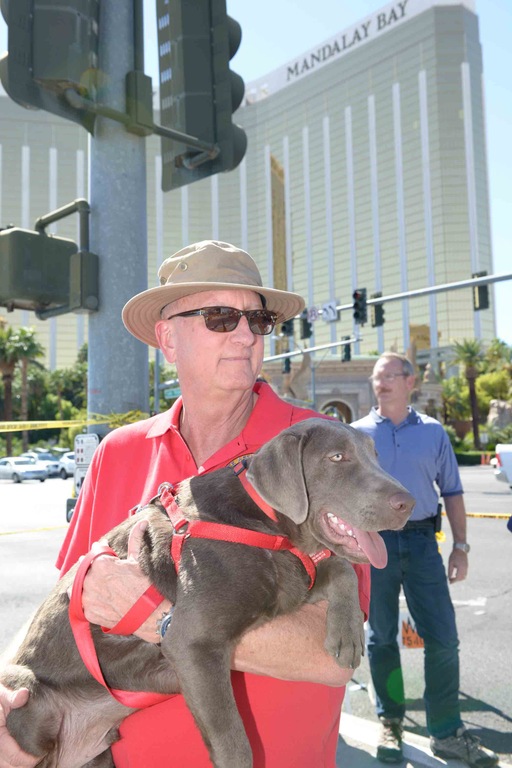 FBI Las Vegas Chaplain Gary Morefield holds Wrangler the dog while providing spiritual support and general comfort to those at the scene after the October 1, 2017 mass shooting in Las Vegas.

All FBI employees who deploy to mass casualty scenes are debriefed. The intervention program includes psychological education for entire offices, small group work for employees who have shared similar experiences, and individual counseling.

Chaplains work part-time but hold regular office hours when they are not deployed in the field, meeting with employees and practicing their ministry of presence.

“It’s a process, to allow them the ability to share,” Morefield said. “People will be struggling with this for a long time. This shooting here, it was just pure evil.”

An Ohio man who traveled to Syria for terrorist training—and planned to use that training to conduct attacks in the United States—was sentenced to 22 years in federal prison.

A high-profile case involving a longtime board member of Houston Community College serves to raise awareness about unscrupulous officials who violate the public trust for personal gain.