After 12 Years on the Run, Joseph Dibee Has Been Apprehended 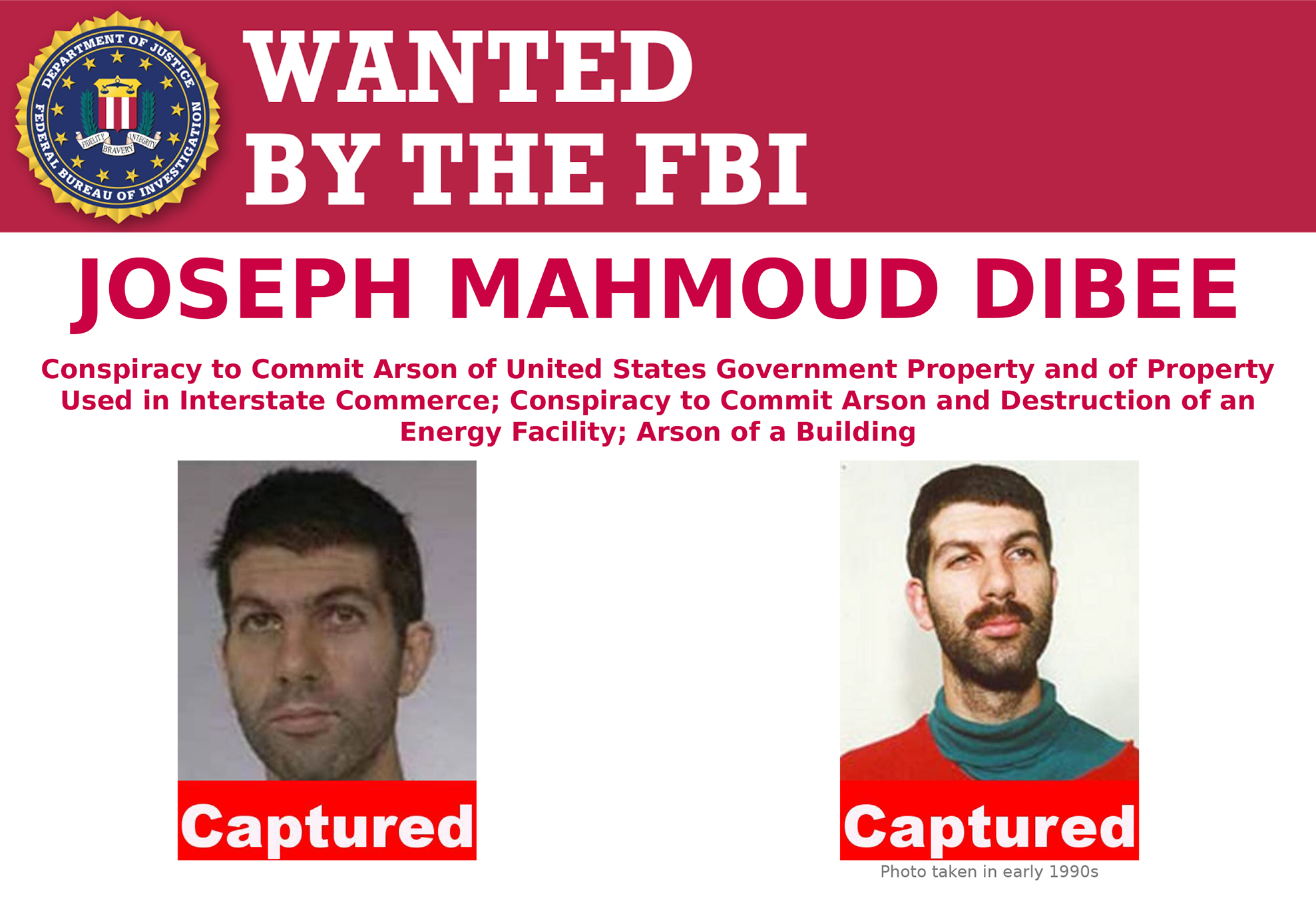 Joseph Mahmoud Dibee, one of two remaining fugitives linked to a domestic terrorism group that carried out dozens of criminal acts in the late 1990s, ranging from vandalism to arson, has been apprehended.

The 50-year-old fugitive, a U.S. citizen who had been on the run for 12 years, made an initial court appearance in Portland, Oregon today. He faces additional federal felony charges in California and Washington State.

Federal authorities learned that Dibee was traveling through Central America on his way to Russia with a planned stop in Cuba, according to court documents. With assistance from Cuban authorities, he was detained there before boarding a plane bound for Russia and was returned to the United States.

Dibee fled the U.S. in December 2005. In 2006, he was indicted along with 11 co-conspirators as part of Operation Backfire, a long-running FBI domestic terrorism investigation. The conspirators, known as The Family, have been linked to more than 40 criminal acts between 1995 and 2001, including arson and vandalism, causing more than $45 million in damages. The Family’s 1998 arson attack on a ski resort in Vail, Colorado—which caused estimated damages of $26 million—was its most notorious act.

“The crimes they committed were serious and dangerous,” said Special Agent Tim Suttles, who has been working the Operation Backfire investigation from the FBI’s Portland Field Office since 2004. “Just because time passes doesn’t mean the FBI forgets. We are very gratified to have Dibee in custody.”

“Just because time passes doesn’t mean the FBI forgets. We are very gratified to have Dibee in custody.” 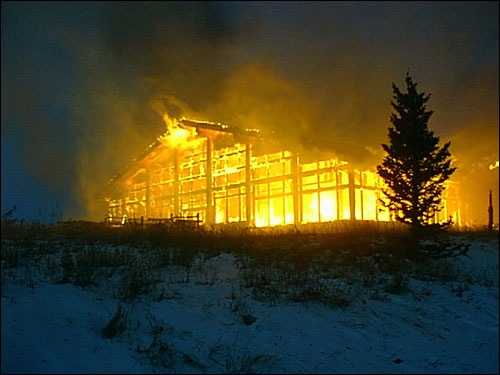 The 1998 arson of a Colorado ski resort by a group known as The Family drew international attention to eco-terrorists—those who break the law in misguided and malicious attempts to protect the environment and animal rights.

The Family was a domestic terrorist cell of about 20 people who committed crimes in the Pacific Northwest and western U.S. in the name of the Animal Liberation Front (ALF) and the Earth Liberation Front (ELF). The group disbanded in 2001, in part because of the pressure from the Operation Backfire investigation.

“Every act of violence comes with a choice—a choice to do harm,” said Renn Cannon, special agent in charge of the FBI’s Portland Division, announcing Dibee’s capture at a press conference today in Oregon. Most of the defendants in Operation Backfire, Cannon noted, “have answered for those decisions they made with significant prison sentences and millions of dollars in fines. Dibee, who traveled the world to avoid capture, will now, finally, have to answer to the allegations of violence he faces.”

Dibee’s capture leaves one fugitive still at large from The Family: Josephine Sunshine Overaker, an American citizen believed to be either 43 or 46 years old. Overaker fled to Europe in late 2001. She speaks fluent Spanish and may seek employment as a firefighter, midwife, sheep tender, or masseuse. The FBI continues to offer a reward of up to $50,000 for information leading to her arrest.

“She’s the last one,” Suttles said, explaining that Overaker faces 19 felony counts in Oregon, Colorado, and Washington State. “We will continue to pursue her and to run down every lead that comes to us. We’re not going to give up,” Suttles added, “just because time has passed.”

Overaker has a distinctive tattoo along her back: an image of a bird, running from her right upper arm across her upper back. She has another unknown tattoo on her upper left arm and scars on her ankles, right calf, and right thigh. In 2015, the FBI created age-enhanced images of what the fugitive might look like.

Anyone with information about Overaker should contact their local FBI office or submit a tip online. 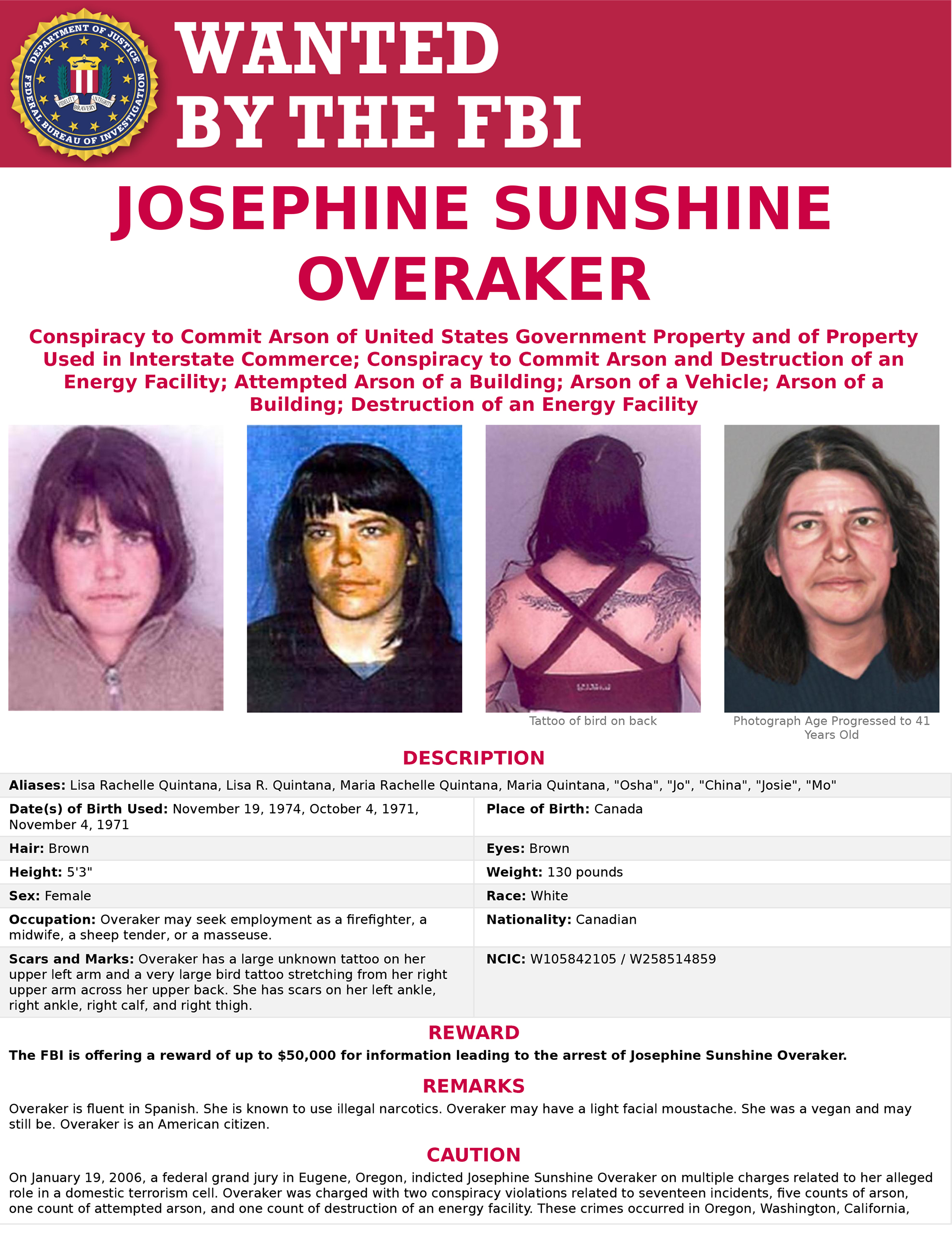 The violent Red Skin Kingz gang, led by a mother-son team on the Navajo Nation, has been dismantled and its leaders sent to prison thanks to an investigation by an FBI-led Safe Trails Task Force.