Behind the Scenes of a Rare RICO Case in Indian Country 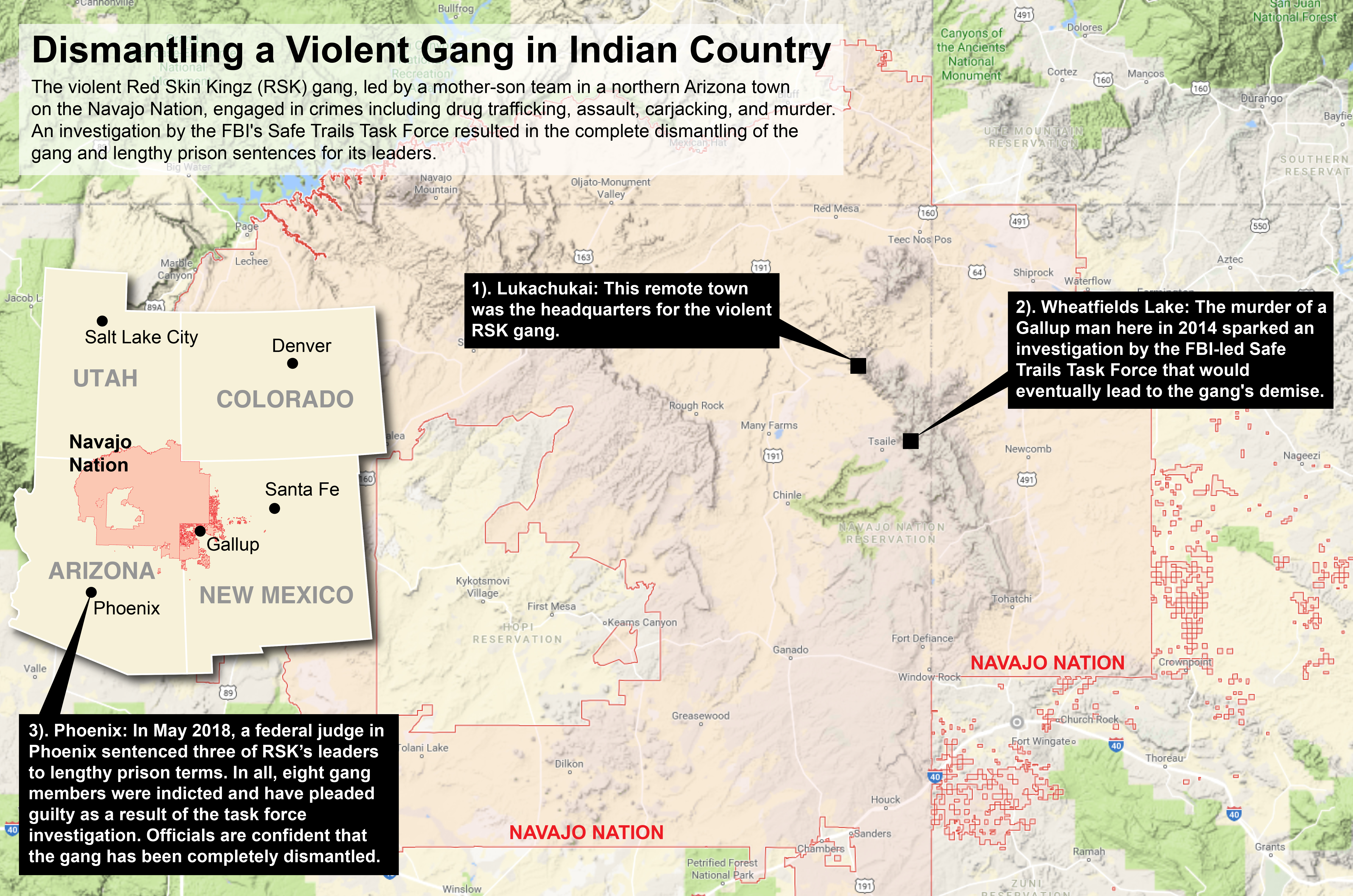 They called themselves the Red Skin Kingz, or RSK for short. And unlike most gangs on the sprawling Navajo Nation Indian Reservation that occupies portions of Utah, New Mexico, and Arizona, this criminal group was highly organized and extremely violent.

“Unfortunately, violence in Indian Country is common,” said Mike Caputo, assistant special agent in charge of the FBI’s Phoenix Field Office, explaining that the violent crime rate on the nearly 200 Indian reservations within the FBI’s investigative jurisdiction is about three times the national average. But RSK, whose top leaders were a mother-son team, “was one of the most violent gangs we have ever seen.”

In May 2018, a federal judge in Phoenix sentenced 28-year-old Devan Leonard to 50 years in prison. His mother, Lucille Leonard, was given a 10-year sentence, and a third gang leader, 26-year-old Kyle Gray, received a 30-year prison term. In a rare occurrence, the three were charged with racketeering offenses typically reserved for the Mafia and other highly structured criminal groups.

The Racketeer Influenced and Corrupt Organizations (RICO) Act is a federal statute that provides penalties for actions performed as part of an ongoing criminal organization. In this case, RSK had been engaged for years in drug trafficking, carjacking, kidnapping, and murder.

“There was a clear hierarchy,” said Special Agent Bradley Smith, who investigated the case from the FBI’s Gallup Resident Agency in New Mexico. “And they committed crimes in furtherance of the gang. Within the span of four days in 2014,” Smith said, “they murdered, dismembered, and burned the bodies of three people.”

RSK members primarily operated in and around the remote northern Arizona town of Lukachukai. Devan Leonard and his mother had a legitimate business there, but selling cocaine and methamphetamine was the gang’s priority. It was a drug-related murder near Gallup in 2014 that triggered the investigation that eventually brought the gang down.

On December 16, 2014, Gray and Devan Leonard shot and killed a Gallup man after a drug deal in nearby Wheatfields Lake, Arizona. Then they took the victim to a remote camp on the Navajo Nation, where they dismembered and burned the body—and forced the victim’s girlfriend to watch.

“We are proud of our work on this case. We were able to hand the community back to the residents.”

“When we started a closer investigation into the two subjects,” Smith said, “we learned of their long history of previous violent crimes.”

Many of those crimes went largely unreported because they occurred in and around Lukachukai, an area so remote from law enforcement that community members who had witnessed RSK’s criminal activity were afraid to come forward for fear of reprisals from the gang.

“This community was being held hostage,” Caputo said. After Devan Leonard and Gray were indicted for the Wheatfields Lake murder, however, and task force members conducted hundreds of interviews in the area, residents gained trust in law enforcement and began to cooperate.

Devan Leonard was eventually linked to two other homicides that occurred four days before the Wheatfields Lake murder. Evidence revealed that Leonard and another RSK leader shot and killed two men and transported their bodies to a remote area in Lukachukai, where they were dismembered, burned, and buried.

According to court documents, Lucille Leonard did not take part in the violence, but did hold a leadership role in RSK, mostly overseeing drug trafficking and the collection of debts owed to the gang.

In all, eight RSK members were indicted and have pleaded guilty as a result of the task force investigation. “We dismantled the gang,” Smith said. “We put a complete stop to their activities.”

“The success of this case can only be attributed to the collaboration of our partner agencies,” Caputo added. “And the community getting on board, providing lots of tips, was invaluable. We are proud of our work on this case,” he said. “We were able to hand the community back to the residents.”

Joseph Mahmoud Dibee, one of two remaining fugitives linked to a domestic terrorism group in the late 1990s known as The Family, has been apprehended overseas and returned to the United States.

A long-time financial predator was recently sentenced following his extradition from Mexico, where he carried out his latest scheme while he was a fugitive from justice in another case.