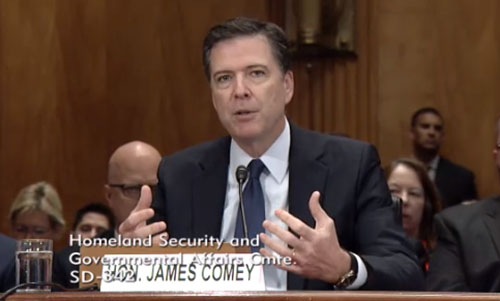 FBI Director James Comey briefs members of the Senate Committee on Homeland Security and Governmental Affairs on current threats to the homeland on October 8, 2015.

Director James Comey told a congressional committee today that while counterterrorism remains the FBI’s top priority, the threat itself has changed in two significant ways. First, the “progeny of al Qaeda”—including ISIL, AQAP, and al Qaeda in the Islamic Maghreb—have become our focus. And second, we’re dealing with an explosion of terrorist propaganda and training on the Internet, in particular social media, so it’s no longer necessary to get a terrorist operative into the U.S. to recruit.

In his statement for the record before the Senate’s Committee on Homeland Security and Governmental Affairs, Comey said that the Bureau continues to identify individuals who want to join the ranks of foreign fighters in support of ISIL and homegrown violent extremists who may aspire to attack the United States from within, and he highlighted several case examples. He also discussed the “Going Dark” issue, which involves the impact of emerging technologies on the FBI’s ability to fulfill its public safety and national security missions. Comey said that the government continues discussions with private companies to ensure they understand the risks that result from malicious actors’ use of their encrypted products and services.

In talking about the cyber threat—from state-sponsored hackers, hackers for hire, organized crime syndicates, and terrorists—Comey said that an element of virtually every national security threat and crime problem the FBI faces is cyber-based or facilitated. And he specifically highlighted an increase in the scale and scope of reporting on malicious cyber activity measured by the amount of corporate data stolen or deleted, personally identifiable information compromised, or remediation costs incurred by U.S. victims. To counter the cyber threat, Comey said that Bureau agents, analysts, and computer scientists use technical capabilities and traditional investigative techniques. They also work cooperatively with local, state, federal, and international partners and with the private sector.

A woman who posed as a hospice nurse and treated more than 200 patients is serving time in prison.