Operation Cross Country, a nationwide law enforcement action that took place last week and focused on underage victims of prostitution, has concluded with the recovery of 149 sexually exploited children and the arrests of more than 150 pimps and other individuals.

The FBI, in partnership with local, state, and federal law enforcement agencies and the National Center for Missing & Exploited Children (NCMEC), conducted the annual action—the ninth and largest such enforcement to date—as part of the Bureau’s Innocence Lost National Initiative.

“Our mission is to protect the American people—especially our children—from harm,” said FBI Director James Comey.” When kids are treated as a commodity in seedy hotels and on dark roadsides, we must rescue them from their nightmare and severely punish those responsible for that horror. We simply must continue to work with our partners to end the scourge of sex trafficking in our country.” 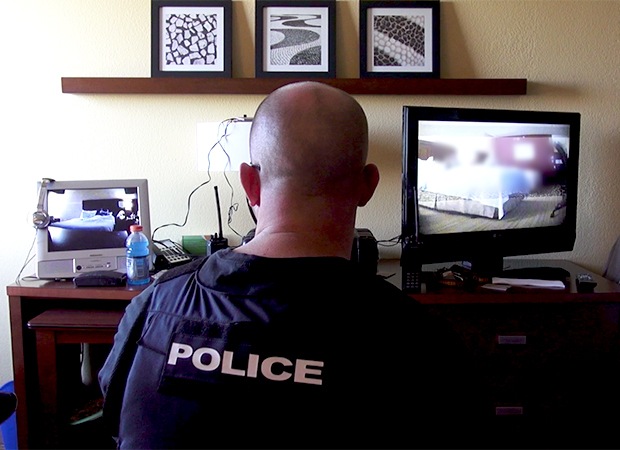 An officer with the Alexandria (Virginia) Police Department monitors an undercover sting operation in a hotel room during Operation Cross Country.

“Human trafficking is a monstrous and devastating crime that steals lives and degrades our nation,” said Attorney General Loretta Lynch. “As a result of the FBI’s outstanding coordination and exemplary efforts alongside state and local partners during Operation Cross Country, more children will sleep safely tonight, and more wrongdoers will face the judgment of our criminal justice system.”

Since its creation in 2003, the Innocence Lost program has resulted in the identification and recovery of approximately 4,800 sexually exploited children. And prosecutors have obtained more than 2,000 convictions of pimps and others associated with these trafficking crimes, including at least 15 cases that have resulted in life sentences.

“We are proud to partner with the FBI and provide support to both law enforcement and victim specialists in the field as they work to locate and recover survivors of child sex trafficking,” said Linda Krieg, NCMEC’s acting chief executive officer. “The number of children recovered and pimps arrested in this year’s operation highlights the importance of these efforts today and every day in protecting our children.”

“From an investigative standpoint, Operation Cross Country targets the individuals and criminal enterprises responsible for the commercial sex trafficking of children,” said one of the Bureau’s victim specialists. “But our main goal is to provide support and services for these young victims—to help stabilize them and get them moving forward in a positive direction.”

Cyber Tip: Be Vigilant with Your Internet of Things (IoT) Devices

Director Comey discussed current threats and the FBI’s efforts to address new challenges, including terrorists’ use of technology to communicate.