Catching Fugitives in the Information Age 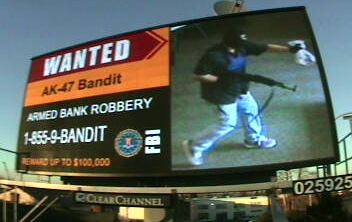 Digital billboards have helped publicize the case of the serial bank robber known as the AK-47 Bandit, who carries an assault rifle during take-over style robberies. The fugitive shot and wounded a California police officer during one robbery and since then has robbed or attempted to rob five more banks.

In April 2013, a Buffalo grand jury indicted 33-year-old Oscar Romero and other suspected members of the Loiza Boys gang, charging them with heroin and cocaine distribution. After nearly a year on the run, investigators received information that Romero had returned to the Buffalo area from Puerto Rico, and the FBI deployed a powerful weapon to help capture the fugitive—digital billboards.

The electronic billboards featuring Romero’s face—along with the words “Wanted” and “Drug Charges” and a number to call—were posted in the Buffalo area on March 31, 2014. Four days later, Romero turned himself in. “When our billboards went live, Oscar Romero had been a federal fugitive for just shy of a year,” said Brian Boetig, special agent in charge of the FBI’s Buffalo Division. “Our partnership with the local billboard company generated media attention and conversations throughout Romero’s West Side neighborhood, which pressured him into safely surrendering.”

Similar events have occurred around the country, thanks to the FBI’s National Digital Billboard Initiative, which began in 2007 in Philadelphia when a graduate of the FBI’s Citizens Academy—who happened to be an executive with Clear Channel Outdoor—offered to provide free space on the company’s digital billboards to help catch criminals and rescue missing children. (See sidebar below.)

Since then, the program has recorded impressive growth—and results. To date, the FBI has captured 53 individuals as a direct result of billboard publicity, and the Bureau now has access to more than 5,200 billboards nationwide made available by a number of companies. The billboard initiative is an excellent example of how law enforcement, the private sector, and the public can all work together to bring criminals to justice in today’s information age.

“We view the partnership with the FBI as a model of public service,” said Nancy Fletcher, president and CEO of the Outdoor Advertising Association of America (OAAA). “The billboard program makes a difference, using the latest technology on behalf of public safety.”

The FBI has formal partnerships with OAAA, Clear Channel Outdoor, Lamar Advertising Company, Outfront Media (formerly CBS Outdoor), Adams Outdoor Advertising, the Fairway Media Group, CEMUSA, and the Outdoor Advertising Association of Georgia. All these organizations—including other digital advertisers who informally support the program—have been critical to the success of numerous investigative efforts, because digital billboards are extremely effective in reaching the public with information about fugitives, missing persons, and public safety issues.

“The companies’ willingness to assist us in bringing criminals to justice, as well as the speed in which they are able to publicize the information, is a tribute to their organizations,” said Mike Kortan, assistant director for the FBI’s Office of Public Affairs. “Their efforts have given us an added edge to identify, locate, and apprehend fugitives—and that, in turn, has helped to stop many criminals from further victimizing the public.”

Because digital billboards can be quickly changed and updated, information about a kidnapped child, a bank robbery, or a matter of public safety can immediately be displayed. And messages can be targeted to specific geographic locations, which is important when time is of the essence.

And as the program expands, we are adding new formats. Fugitive information, for example, is now being displayed on digital bus shelters in Washington, D.C., and digital newsstands in New York City. “Thanks to our partnerships, the billboard initiative has been a tremendous success,” Kortan said. “We look forward to its continued growth.”

A Partnership is Born

In 2007, a vice president at Clear Channel Outdoor joined one of our Citizens Academy classes in Philadelphia to learn more about the FBI. She soon realized how helpful her company’s digital billboards could be to the Bureau, and in September of that year, images of 11 violent fugitives were posted on eight city billboards along with a hotline number for the public to call.

By October, two of those fugitives were captured as a direct result of the publicity. Weeks later, when a Philadelphia police officer was killed while responding to an armed robbery, law enforcement was quickly able to publicize the suspect on Clear Channel’s digital billboards. (He was later apprehended in Florida.)

Based on the success of the Philadelphia program, the National Digital Billboard Initiative was created, and today—thanks to the participation of other companies who donate space—the FBI has access to more than 5,200 billboards nationwide.

Notable examples of billboard successes include:

The FBI is recruiting the best technical talent to join the ranks of cyber special agents.