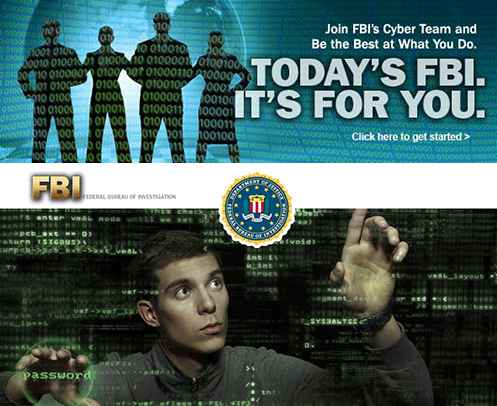 Since its earliest days, the FBI has looked for recruits with specialized skills to fill its special agent ranks: lawyers, accountants, scientists, and engineers, to name a few. Today, however, the most sought-after candidates possess a uniquely 21st century quality: cyber expertise.

Investigating cyber crimes—such as website hacks, intrusions, data theft, botnets, and denial of service attacks—is a top priority for the FBI. To keep pace with the evolving threat, the Bureau is appealing to experienced and certified cyber experts to consider joining the FBI to apply their well-honed tradecraft as cyber special agents.

“The FBI seeks highly talented, technically trained individuals who are motivated by the FBI’s mission to protect our nation and the American people from the rapidly evolving cyber threat,” said Robert Anderson, Jr., executive assistant director for the Bureau’s Criminal, Cyber, Response, and Services Branch. “What we want are people who are going to come and be part of a team that is working different, very complex types of investigations and to utilize their skillsets in that team environment.”

The Bureau recently launched a campaign to bring aboard more technical talent, including computer scientists, IT specialists, and engineers. In a job posting—open until January 20—the FBI says no other organization will apply the expertise of successful candidates like the FBI.

“One thing that no one else can offer is the mission and the camaraderie and the teamwork the FBI brings to the table,” Anderson said. “Cyber agents will be integrated into all the different violations that we work. So whether it’s a counterterrorism or counterintelligence investigation, they could be the lead agent in the case.”

Key requirements to be a special agent include passing a rigorous background check and fitness test. Agents must be at least 23 and no older than 37. Prospective cyber special agents are expected to meet the same threshold as special agents, but also have a wealth of experience in computers and technology. Preferred backgrounds include computer programming and security, database administration, malware analysis, digital forensics, and even ethical hacking. An extensive list of sought-after backgrounds and certifications can be seen on the job posting.

“Cyber permeates every aspect of what we do, whether it’s counterterrorism, criminal investigations, or traditional cyber attacks, as we’ve seen in the recent past,” Anderson said. “That’s why these types of people are so important to get into the pipeline and come into our organization.”

Bank robberies help illustrate how the landscape has shifted. Traditionally, a team of agents responding to an armed bank robbery would cordon off a crime scene, interview witnesses, and collect evidence, such as fingerprints and security video. However, if the money was stolen through a cyber intrusion into the bank’s holdings, the approach would be very different: a cyber agent would request firewall logs and forensic copies of hard drives, in addition to interviews.

The FBI already has a lengthy track record fighting cyber crimes. In June, the FBI announced its role in the multinational effort to disrupt the GameOver Zeus botnet, believed to be responsible for the theft of millions of dollars from businesses and around the world. A month earlier, the FBI announced charges against distributors of malicious software that infected millions of computers. Forty FBI field offices executed more than 100 search warrants and seized more than 1,900 domains used by Blackshades users to control victims’ computers.

But the FBI wants to grow to meet tomorrow’s challenges. “We’re looking to hire a lot of cyber agents now,” Anderson said. “It’s an area where the FBI and the whole U.S. government will be looking for this talent for years to come.”

Cyber agents can expect continued specialized training once onboard and to work on some of the Bureau’s most complex cases. Given the broad scope of the FBI’s work, Anderson says there is no other place like it.

“I do think the biggest thing you can offer to anyone that comes to work at the FBI is the mission and the scale of investigations,” Anderson said. “It doesn’t matter where you go, it doesn’t matter who you work for, you can’t get that anywhere else but the FBI.”