The Hunt for Roger “The Terrible” Touhy and His Gang

Roger “The Terrible” Touhy and other violent criminals escaped from a penitentiary in Illinois in 1942.

The careful plans were laid. In the early morning hours of December 29, 1942—70 years ago this month—FBI agents surrounded an apartment building on Kenmore Avenue in Chicago filled with a dangerous band of escaped convicts. With searchlights illuminating the building and nearby neighbors evacuated, an agent with a loudspeaker called for the men to surrender. Even Director J. Edgar Hoover was on hand. 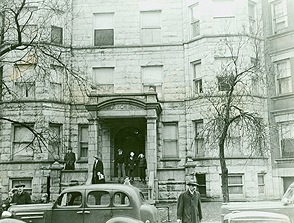 At the time, America was at war—fighting in theaters in Europe and the Far East during World War II. The FBI was supporting the effort in many ways, protecting the homeland from espionage and sabotage and supplying valuable intelligence to its partners and to national leaders. One of its other wartime responsibilities was enforcing a newly enhanced Selective Service Act, which subjected all men of certain ages to either enter or register for military service. As it turns out, this law was the legal hook enabling the FBI to hunt down these criminals.

The prison break had taken place nearly three months earlier, on October 9. A group that included Roger “The Terrible” Touhy, Basil “The Owl” Banghart, Edward Darlak, and several other violent criminals escaped from the Stateville Penitentiary at Joliet, Illinois. They had guns smuggled in, cased the prison from all angles, and executed a well-planned break out.

Stealing a guard’s car, they sped away. Hours later, they abandoned the car openly in the middle of a small suburb east of Chicago. It was their signal to the FBI that they didn’t want to take the car across state lines and trigger Bureau jurisdiction. But they didn’t realize that they would soon run afoul of the Selective Service Act. On October 16, one week after the no longer imprisoned criminals failed to register for the draft, the FBI entered the case.

The FBI had numerous leads to begin its search for Touhy and his gang. The Bureau knew Touhy well, arresting him nine years earlier on suspicion of being involved in the kidnapping of the president of a Minnesota brewing company. While in custody, Illinois courts convicted Touhy of abducting a rival criminal named John “Jake the Barber” Factor. Touhy was sent to prison in 1934.

Life on the run was not easy, and the gang began to have problems. Two members disobeyed the gang’s rules and were nearly beaten to death. The gang moved often and was careful to cover its tracks. The Bureau figured that Touhy and his cohorts would use IDs stolen through pickpockets and muggings and worked with local police to collate these crimes and look for those assuming victims’ identities.

It worked, leading to the capture of the first fugitive. More success followed. On December 16, agents observed a known acquaintance of one gang member participating in a suspicious meeting with an unknown contact. Agents tracked the unknown man, which led them to two more gang members (who died in a gunfight with Bureau agents) and ultimately to Touhy, Banghart, and Darlak. Following the early morning arrest, the gang was quickly returned to prison. They were home for the holidays—well, back in the big house anyway.

For years, the St. Paul Croatian Federal Credit Union in Eastlake, Ohio—about 30 miles northeast of Cleveland—had provided financial support to Croatians who had settled in the area and to others in the community.