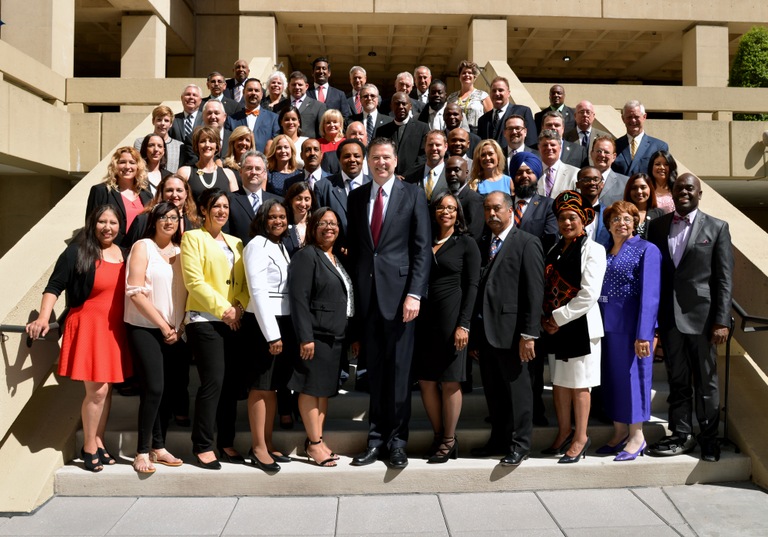 Recipients of the 2016 Director’s Community Leadership Awards were honored in a ceremony at FBI Headquarters in Washington, D.C.

FBI Director James Comey today formally recognized 58 individuals and organizations from around the country for their efforts to build stronger, safer, and more cohesive communities.

“This is one of the very best days in the life of this organization,” Director Comey said during the April 28 ceremony at FBI Headquarters in Washington, D.C. “We get to recognize and thank people who made the FBI better and the country better.”

The annual Director’s Community Leadership Awards were launched in 1990 as a way to spotlight individuals and organizations for their work in combating crime, drugs, terrorism, and violence. Today’s recipients were also recognized for their work in bridging the relationships between law enforcement agencies and the communities they serve, developing strategies to battle the nation’s opioid crisis, and assisting victims of human trafficking, among other efforts.

Honorees are nominated by each of the FBI’s 56 field offices, as well as the Bureau’s Office of Public Affairs and the Criminal Justice Information Services Division.

The Director related a story about speaking to young audiences and warning them against losing sight of what really matters in life. He would ask them to close their eyes, imagine they were old, and then ask themselves: Who do I want to have been? “I know some of you want to have been people who made a difference for those who needed you,” he would tell the kids, “to have been people who chose lives of moral content, who stood there for the bullied and the picked on and the frightened.”

“Why am I telling you this?” Comey asked on Friday. “This auditorium is filled with people who have already answered the question in the most remarkable way. You will have been those people. We’re here today to thank you for being that. Because of you, the FBI is better. Because of you, the United States of America is better.”

The creator and lead administrator of what was believed to be the world’s largest child pornography website—with more than 150,000 users around the world—is serving 30 years in prison.

The Scourge of Child Pornography

In coordination with local, state, federal, and international partners, the FBI devotes extensive resources to fighting the sexual exploitation of children.