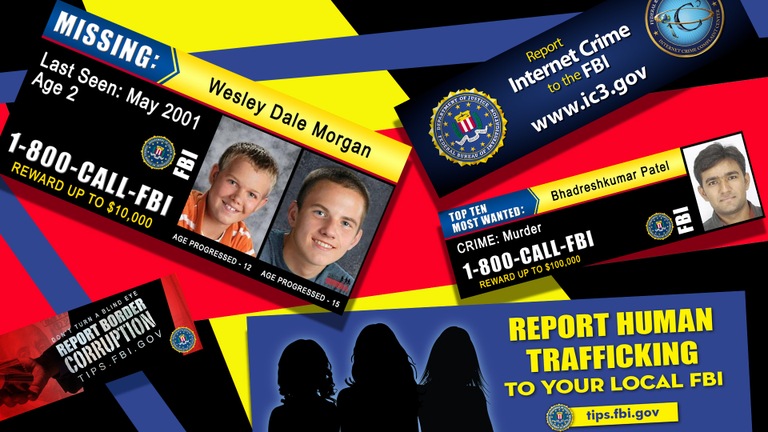 When alleged Florida gang member Demeko Wells was wanted for credit card fraud and identify theft earlier this year, he noticed his own photo on a digital billboard alert in the Tampa area, and he knew his days of freedom were numbered.

The next day, Wells turned himself into police and pleaded guilty to several charges. In October, he was sentenced to nearly five years in prison.

This is just one of many examples of the FBI working with the outdoor advertising industry to place timely, critical information directly in the public’s view on electronic roadside billboards. These messages can be produced and posted quickly after a crime occurs or a person goes missing, and they can be targeted to specific geographic areas.

While some billboard alerts focus on wanted criminals, including the FBI’s Ten Most Wanted Fugitives, many also cover important safety reminders, often tailored to the local area. Public safety messages on billboards remind the public to call the FBI with information on issues such as Internet crime, laser strikes, border corruption, human trafficking, and identity theft.

Created in December 2007, the National Digital Billboard Initiative has directly led to 57 fugitive captures and has assisted with numerous other investigations. The FBI can place information on up to 7,300 billboards in 46 states. Additionally, in some cities, the messages can be broadcast via digital message boards in bus shelters or digital newsstands.

“Our digital billboard program gets results and helps us keep the public safe.”

“Our digital billboard program gets results and helps us keep the public safe,” said FBI Office of Public Affairs Unit Chief Christopher Allen, whose office manages the program. “Our private sector partners in the outdoor advertising industry help us target critical messages to the public in a timely fashion. These billboards have helped us solve complex crimes, arrest dangerous fugitives, and raise awareness on threats ranging from sex trafficking to border corruption.”

Outdoor advertising companies donate available space, as a public service, and the FBI’s messages rotate in and out along with paid advertising. The FBI messages are visible for approximately 10 seconds.

“Posters empowering the public to help law enforcement pre-date Jesse James,” said Nancy Fletcher, president and CEO of the Outdoor Advertising Association of America (OAAA). “As media changed, the FBI has kept pace by using digital billboards and other modern media to communicate with a mobile public on behalf of safety.”

The FBI has released details on more than 6 million criminal offenses reported by law enforcement agencies around the country to the National Incident-Based Reporting System (NIBRS) in 2016.

The recent sentencing of a Texas woman to 10 years in prison marked the end of a long-running, multi-million-dollar health care fraud scheme that placed vulnerable patients at risk.