The FBI selected about 700 new honors interns from a pool of 15,000 applicants. The interns will be assigned to work at FBI Headquarters, the Bureau’s research and laboratory facilities at Quantico, Virginia, and in each of the FBI’s 56 field offices around the country.

Hundreds of college students and recent graduates raised their right hands today and took an oath promising to support and defend the U.S. Constitution, thus beginning a 10-week summer internship with the FBI—and possibly a lifelong career in public service.

The FBI’s highly competitive Honors Internship Program, established more than three decades ago, attracted a record 15,000 applicants this year. From that pool of talented young people, only about 700 new interns were selected, along with 300 returning interns, all of whom will be assigned to work at FBI Headquarters, the Bureau’s research and laboratory facilities at Quantico, Virginia, and in each of the FBI’s 56 field offices around the country. 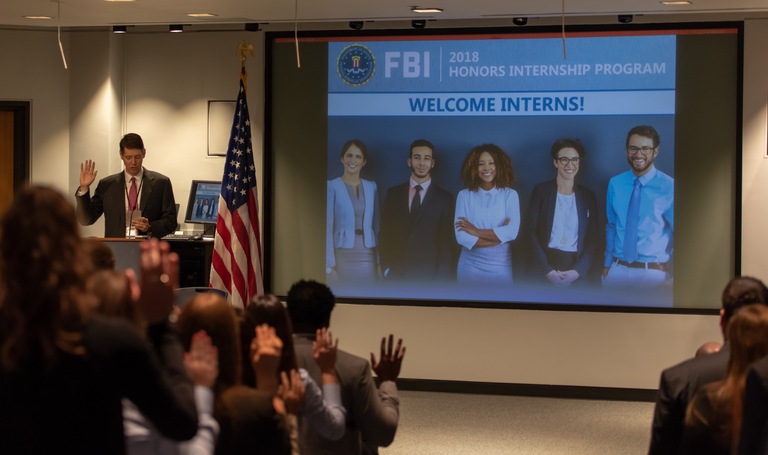 David Schlendorf, assistant director for the FBI's Human Resources Division, administers the oath of office to members of the Honors Internship Program at FBI Headquarters as they begin a 10-week summer work program at the Bureau.

“The record number of applicants this year shows the extraordinary interest that young people have in the FBI’s work and its mission.”

The interns will be exposed to just about every aspect of the Bureau’s law enforcement and national security mission, working alongside agents, intelligence analysts, cyber experts, scientists, linguists, and other professional staff.

“The record number of applicants this year shows the extraordinary interest that young people have in the FBI’s work and its mission,” said Jacqueline Maguire, acting assistant director of the Office of Public Affairs. “It’s clear that the FBI is an employer of choice for college students and recent graduates.”

For some of this year’s interns, joining the FBI represents a lifelong dream. Bailey, a rising junior at the University of Northern Iowa, said her sights have been set on the FBI “for years.”

“I decided FBI—go big or go home,” said the biochemistry major, who will spend her summer working in the FBI Laboratory at Quantico. She hopes one day to become a special agent so she can help protect people. “I think that would be a great career path for me.”

Other interns are curious about getting an insider’s look at the organization to see if the Bureau might be a good career fit. Eric, a student at the University of Virginia pursuing a degree in global studies and security and justice, with a concentration in counterterrorism and criminology, will be working in the Bureau’s Operational Technology Division.

His godfather is an FBI employee, and Eric respects the values he embodies and the work he does. The Honors Internship Program, he said, will give him and the other interns a chance “to figure out if the FBI is right for us and if we’re right for the FBI.”

For more information about internships and careers at the FBI, visit FBI Jobs.

A reward is available for information about an unknown assailant whose DNA profile has been indicted in connection with a series of attacks on women in D.C.-area hotels from 1998 to 2006.