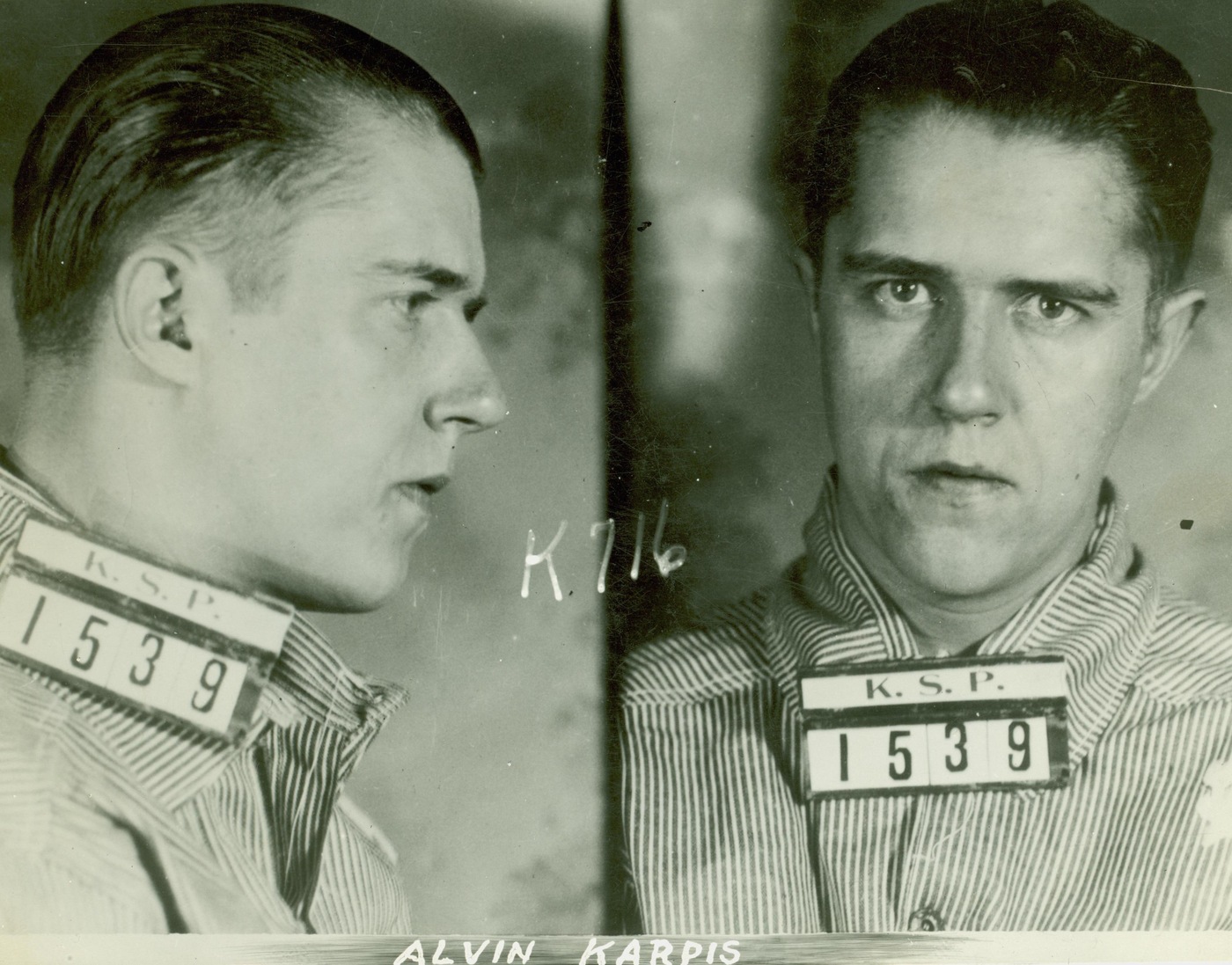 They ended up among the FBI’s most hunted gangsters of the time period.

On a warm summer evening in 1933, William A. Hamm, Jr., President of the Theodore Hamm Brewing Company, was working at his office in St. Paul, Minnesota. He had just exited the building when he was grabbed by four shadowed figures and pushed into the back of a car. What he didn't know was that he had been kidnapped by members of the Barker/Karpis gang, for a ransom of over $100,000.

Hamm was taken to Wisconsin, where he was forced to sign four ransom notes. Then he was moved to a hideout in Bensenville, Illinois, were he was held prisoner until the kidnappers had been paid. Once the money was handed over, Hamm was released near Wyoming, Minnesota. The plan was perfect and went off without a hitch...almost.

On September 6, 1933, using a then state-of-the-art technology now called latent fingerprint identification, the FBI Laboratory raised incriminating fingerprints from surfaces that couldn't be dusted for prints. Alvin Karpis, “Doc” Barker, Charles Fitzgerald, and the other members of the gang had gotten away, but they'd left their fingerprints behind—all over the ransom notes.

The Silver Nitrate Method and its application in the Hamm Kidnapping was the first time it was used successfully to extract latent prints from forensic evidence. Scientists had just thought to take advantage of the fact that unseen fingerprints contain perspiration, chock full of sodium chloride (common table salt). 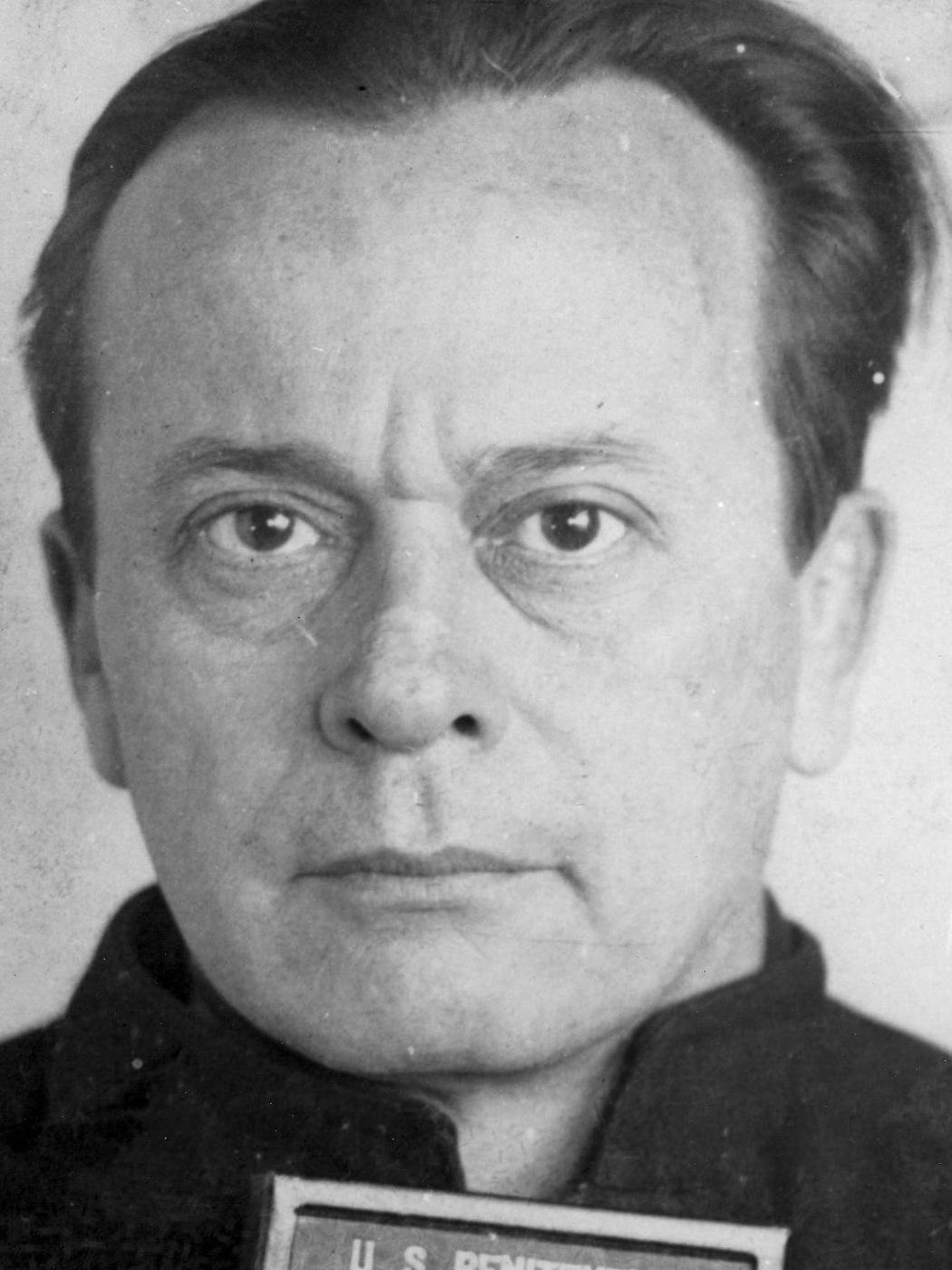 By painting the evidence, in this case the ransom notes, with a silver nitrate solution, the salty perspiration reacted chemically to form silver chloride—which is white and visible to the naked eye. There they were: hard evidence that the Karpis gang was behind the kidnapping.

The second kidnapping of the Barker/Karpis gang targeted a wealthy banker named Edward George Bremer, Jr., who was snatched in St. Paul, Minnesota on January 17, 1934.

Bremer was released three weeks later after his family paid $200,000 in ransom. Although he couldn’t identify the culprits, Bremer provided many clues.

A key break came when the fingerprint of Arthur “Doc” or “Dock” Barker, a known criminal, turned up on an empty gas can found by a local police officer along the kidnapping route.

The End of the Barker Gang

The gang split up after the Bremer kidnapping and began crisscrossing the country—with some even fleeing to Cuba. Three went as far as to undergo back-room plastic surgeries to conceal their fingerprints and identities. Others passed the ransom loot back and forth and looked for ways to launder the bills.

In late September 1934, Fred Barker and Campbell registered under fake names at the El Commodore Hotel in Miami. Joining them was Fred’s mother—Kate “Ma” Barker, who was known to help her criminal sons. When Fred asked for a quiet place to live, the hotel manager told him of a friend’s cottage for rent on the nearby Lake Weir. The Barkers moved there in November.

In December, Doc Barker was tracked by Bureau investigators to a home in Chicago. On January 8, Doc was arrested without incident. Later that night, several associates of Russell Gibson were also apprehended. Heavily armed and wearing a bullet-proof vest, Gibson tried to fight it out but was mortally wounded. Searching the apartment, agents found powerful firearms and loads of ammunition. And, tellingly, a map of Florida—with Lake Weir circled. Agents soon located the cottage hideout.

Shortly after 5 a.m. on January 16, 1935, a group of agents led by Earl Connelly surrounded the house and demanded the Barkers’ surrender. No response. They waited 15 minutes and called again. Again, no answer. Following another call for surrender and more silence, agents shot some tear gas grenades at the windows of the house. Someone in the house shouted, “All right, go ahead,” then machine-gun fire blasted from the upstairs window. 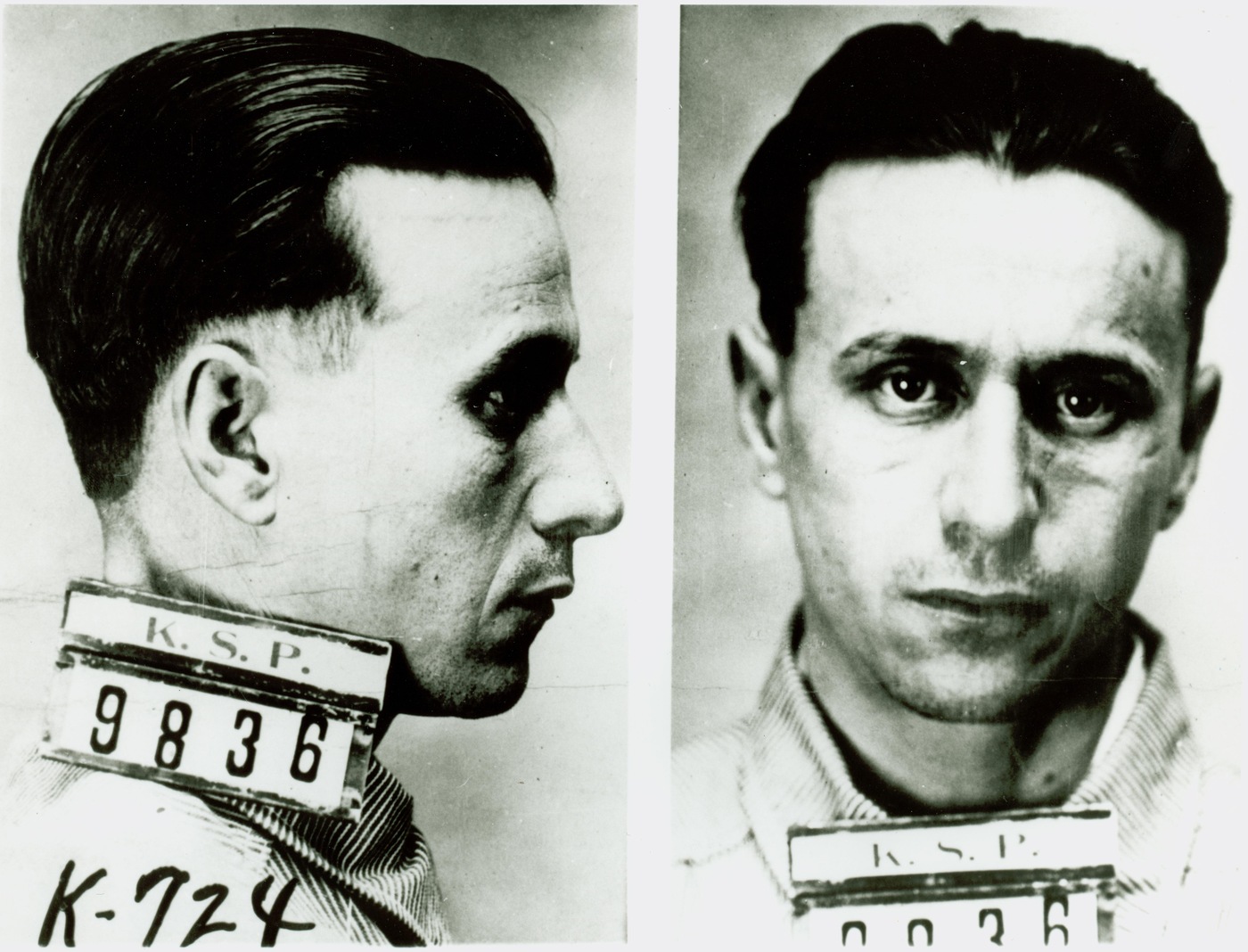 Mugshot of Fred Barker following his arrest in 1926

The agents responded with volleys of their own; more gunfire erupted from the house. Over the next hour, intermittent shots came from the home, and agents returned fire. By 10:30 a.m., all firing had stopped. Both Ma and Fred, it was soon learned, were dead. 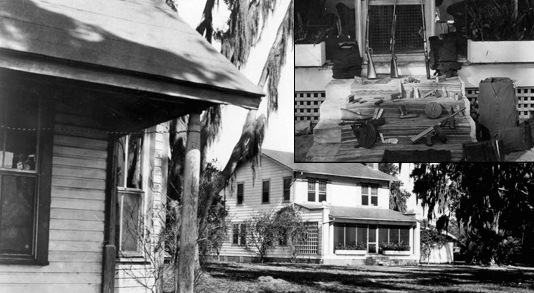 The Florida home (right) where “Doc” and “Ma” Barker were killed in a shootout with Bureau agents. Inset: The cache of Barker weapons recovered by agents after the firefight.

The Big Fish is Caught

Alvin Karpis, the brains of the gang, remained elusive.

Karpis had long led a life a crime. He was born in Montreal in 1907 under the name Karpavicz; his parents—immigrants from Lithuania—later settled down in Kansas. In 1926, he found himself serving 10 years in prison for burglary. Following a jail-break in 1930, Karpis began his criminal career in earnest, often working with members of the Barker family. A string of bank robberies, auto thefts, and even murder followed, before the kidnappings of Hamm, Jr., and Bremer put him squarely on the FBI's radar.

In April 1936, Tennessee Senator Kenneth McKellar called Director J. Edgar Hoover on the carpet during an appropriations hearing, complaining about his request for more funds. When the senator challenged Hoover on how many arrests he had made personally, the Director vowed to himself that he would be involved in the next big one.

So when word came that Karpis had been located later that month, Hoover flew that night to New Orleans and joined the waiting raid team, which had staked out the criminals’ apartment on Canal Street. The next day, on May 1, shortly after 5 p.m., Karpis and two others left the apartment and got in a Plymouth coupe. Hoover signaled his men, who closed in. The Director ordered Karpis to be cuffed. Ironically, no one had brought handcuffs, so one agent removed his tie and secured the hands of Alvin Karpis. The fish had been caught.

Within hours, Hoover was escorting Karpis back to St. Paul, where he eventually pled guilty to the Hamm kidnapping and was sentenced to life in prison. After stays in Alcatraz and other prisons, Karpis was paroled in the late 1960s. 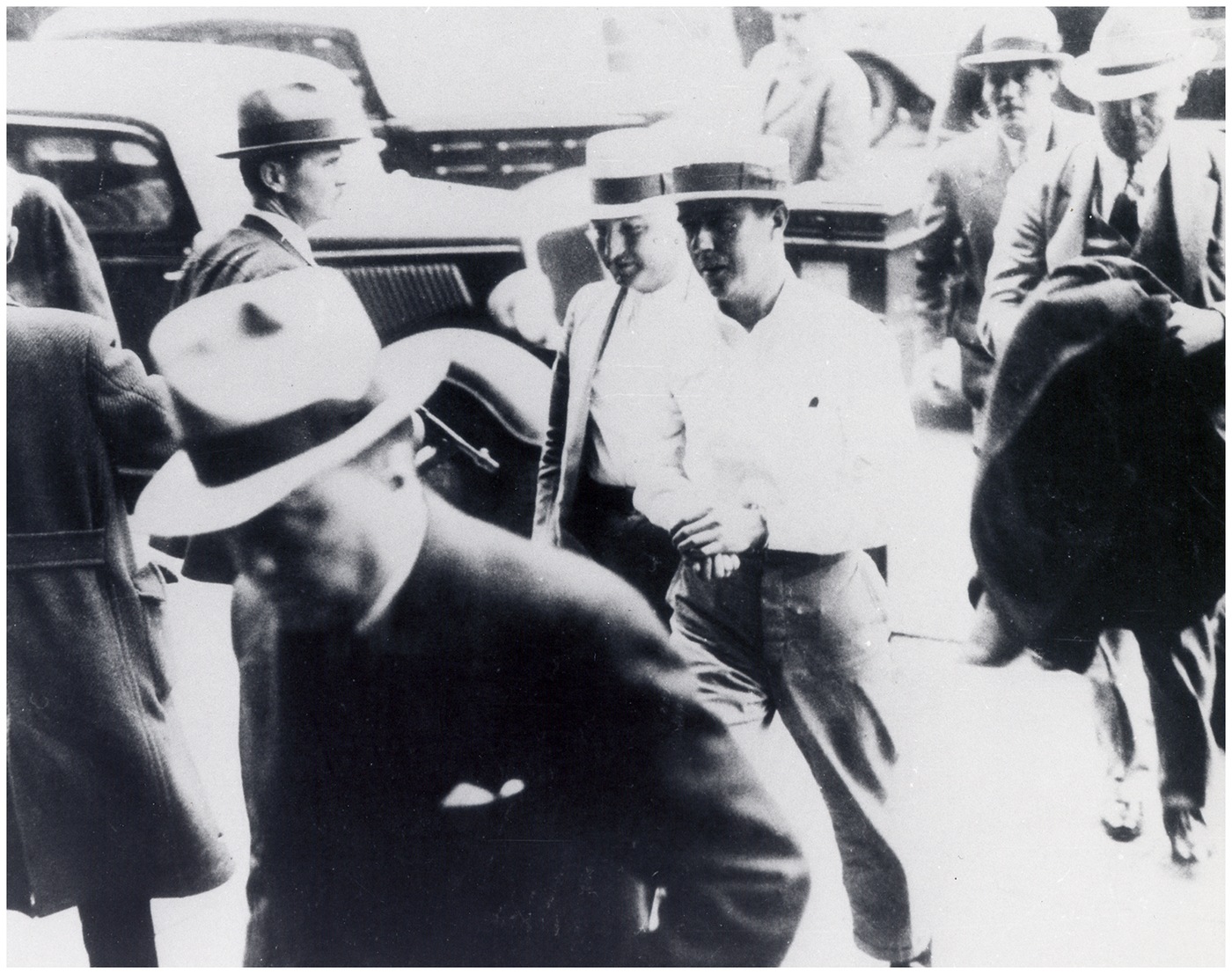 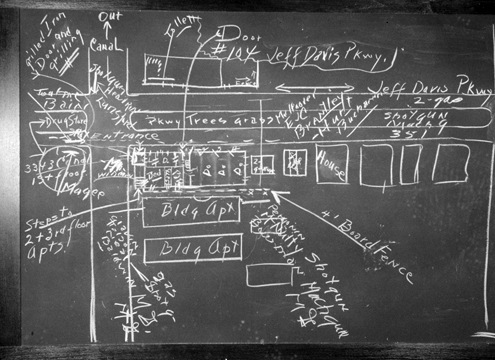 The FBI’s plan to capture Karpis was sketched out on a blackboard.