A Byte Out of History: Closing in on the Barker/Karpis Gang

Closing in on the Barker/Karpis Gang 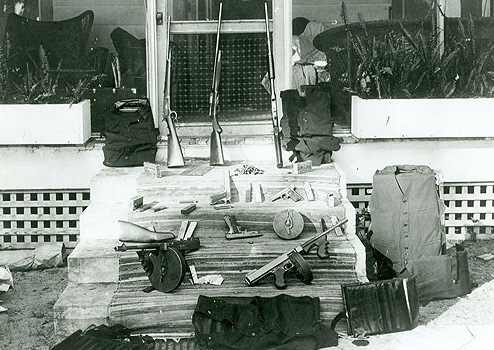 The Barkers were heavily armed at a cottage near Lake Weir, Florida, where they engaged in a shootout with Bureau agents in 1935. The weapons above were seized following the gunfight.

In January 1935—77 years ago this month—more than a dozen Bureau agents surrounded a quaint two-story home on Lake Weir, Florida. Within moments, a fierce shoot-out erupted. It didn’t go well for the heavily armed criminals inside.

For the Bureau of Investigation—just six months away from being renamed the FBI—the firefight was a continuation of a busy year of battling gangsters. In 1934, notorious public enemies like John Dillinger, “Pretty Boy” Floyd, and “Baby Face” Nelson had fallen at the hands of Bureau agents. Heading into 1935, the top priority was to put a dangerous gang—led by the wily Alvin “Creepy” Karpis and a pair of Barker brothers—out of business.

The gang got the Bureau’s attention through two high-profile kidnappings. The second targeted a wealthy banker named Edward George Bremer, Jr., who was snatched in St. Paul, Minnesota on January 17, 1934. Bremer was released three weeks later after his family paid $200,000 in ransom. Although he couldn’t identify the culprits, Bremer provided many clues. A key break came when the fingerprint of Arthur “Doc” or “Dock” Barker, a known criminal, turned up on an empty gas can found by a local police officer along the kidnapping route. Soon, a number of Barker’s confederates—including his brother Fred, Karpis, Harry Campbell, Fred Goetz, Russell Gibson, Volney Davis, and others—were linked to the crime.

The hunt was on, but the gang had a head start. They had split up and begun crisscrossing the country—with some even fleeing to Cuba. Three went as far as to undergo back-room plastic surgeries to conceal their fingerprints and identities. Others passed the ransom loot back and forth and looked for ways to launder the bills.

In late September, Fred Barker and Campbell registered under fake names at the El Commodore Hotel in Miami. Joining them was Fred’s mother—Kate “Ma” Barker, who was known to help her criminal sons. When Fred asked for a quiet place to live, the hotel manager told him of a friend’s cottage for rent on the nearby Lake Weir. The Barkers moved there in November.

In December, Doc Barker was tracked by Bureau investigators to a home in Chicago. On January 8, Doc was arrested without incident. Later that night, several associates of Russell Gibson were also apprehended. Heavily armed and wearing a bullet-proof vest, Gibson tried to fight it out but was mortally wounded. Searching the apartment, agents found powerful firearms and loads of ammunition. And, tellingly, a map of Florida—with Lake Weir circled. Agents soon located the cottage hideout.

Shortly after 5 a.m. on January 16, 1935, a group of agents led by Earl Connelly surrounded the house and demanded the Barkers’ surrender. No response. They waited 15 minutes and called again. Again, no answer. Following another call for surrender and more silence, agents shot some tear gas grenades at the windows of the house. Someone in the house shouted, “All right, go ahead,” then machine-gun fire blasted from the upstairs window.

The agents responded with volleys of their own; more gunfire erupted from the house. Over the next hour, intermittent shots came from the home, and agents returned fire. By 10:30 a.m., all firing had stopped. Both Ma and Fred, it was soon learned, were dead.

The Barkers were history, but the cunning Karpis was still on the loose. How we caught up with him is another story that we’ll tell in the coming months.

A total of 25 individuals were convicted in connection with the Edward Bremer kidnapping, including seven who harbored members of the Barker/Karpis gang. Six of those convicted received life sentences, and three were killed resisting arrest, including Russell Gibson, Fred Barker (above), and Kate “Ma” Barker.

After many hours on the road, the long-haul driver pulled his tractor-trailer into a Tennessee truck stop for a break and a hot meal.

For the young Ukrainians, it was a dream come true—the promise of well-paying jobs and free room and board in the United States