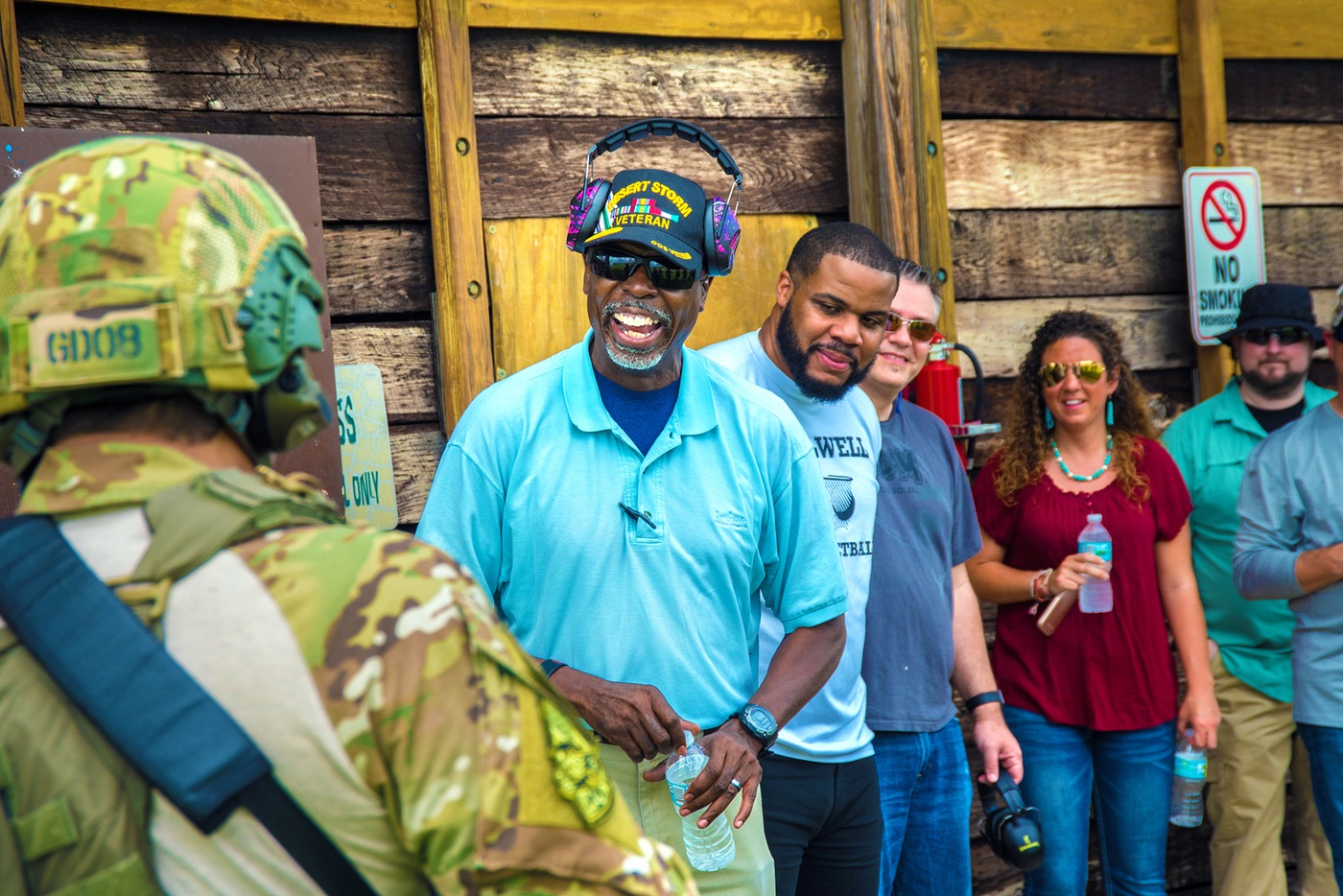 The Citizens Academy is an engaging six-to-eight-week program that gives business, religious, civic, and community leaders an inside look at the FBI. Classes meet in the evening at the FBI field office. The mission of the FBI Citizens Academy is to foster a greater understanding of the role of federal law enforcement in the community through frank discussion and education.

Candidates are nominated by FBI employees, former Citizens Academy graduates, and community leaders. Participants are selected by the special agent in charge of the local FBI field office.

The next FBI Charleston Resident Agency Citizens Academy class will be held on Tuesday evenings from 6:00-8:30 p.m., beginning Tuesday, March 7, through Tuesday, May 2, 2023. The deadline for nomination form submissions is Friday, December 16, 2022, at 5:00 p.m.

The Pittsburgh FBI offers public speakers on a limited basis on a variety of topics pertaining to the Bureau’s investigative mission. All requests for speakers must be submitted online a minimum of one month prior to your presentation date. Requests are subject to availability.

Since 1990, the Director’s Community Leadership Awards has been the principal means for the FBI to publicly recognize achievements of individuals and organizations that make extraordinary contributions to education and the prevention of crime and violence in their communities. Each field office nominates an individual or organization for the award, and, once selected, the recipients are invited to a ceremony and reception at FBI Headquarters.

Our Teen Academy program allows high school students an opportunity to get a comprehensive look into today’s FBI. Generally, each course iteration is a minimum of eight hours but can be a week-long program with blocks of instruction and demonstrations at a local field office. Students are provided with several presentations on topics including terrorism, cyber crime, public corruption, polygraph exams, evidence response, SWAT, and the day-to-day operations of a typical FBI office. Students also learn from special agents, intelligence analysts, language specialists, and professional staff about investigative tactics that include gathering evidence, interviewing witnesses, and assisting with cases.

The Child ID app—the first mobile application created by the FBI—provides a convenient place to electronically store photos and vital information about your children on your smartphone (note: no information is stored or collected by the FBI). In the event your child goes missing, users can show the pictures and provide physical identifiers such as height and weight to security or police officers on the spot. Using a special tab on the app, users can also quickly and easily e-mail the information to authorities.

The app also includes tips on keeping children safe, as well as specific guidance on what to do in those first few crucial hours after a child goes missing.

The FBI, in partnership with the DEA, created a short documentary focusing on the crisis of prescription drug and opioid abuse. The film, Chasing the Dragon: The Life of an Opiate Addict, outlines the dangerous cycle of opioid and prescription drug abuse—how the problem starts, how the addiction takes hold, and how that addiction damages one’s life and body. High school students and all ages above are the target audience for this video and the curriculum/facilitated discussion that accompanies it.

Attention Educators and Parents: FBI Pittsburgh Division’s H.O.P.E. (Heroin Outreach Prevention and Education) Initiative has created this product in collaboration with the DEA, Everfi and the Pittsburgh Penguins Foundation, to educate teens on the dangers of prescription drug misuse and substance abuse. Above is a quick sneak peek to the discussion. View the full panel discussion on the FBI’s YouTube channel.

﻿FBI-SOS is a free, fun, and informative program that promotes cyber citizenship by educating students in third to eighth grades on the essentials of online security. For teachers, the site provides a ready-made curriculum that meets state and federal Internet safety mandates, complete with online testing and a national competition to encourage learning and participation. A secure online system enables teachers to register their schools, manage their classes, automatically grade their students’ exams, and request the test scores.

Anyone—young or old, in the U.S. or worldwide—can complete the activities on the FBI-SOS website. The testing and competition, however, are only open to students in grades 3-8 at public, private, or home schools in the U.S. or its territories. 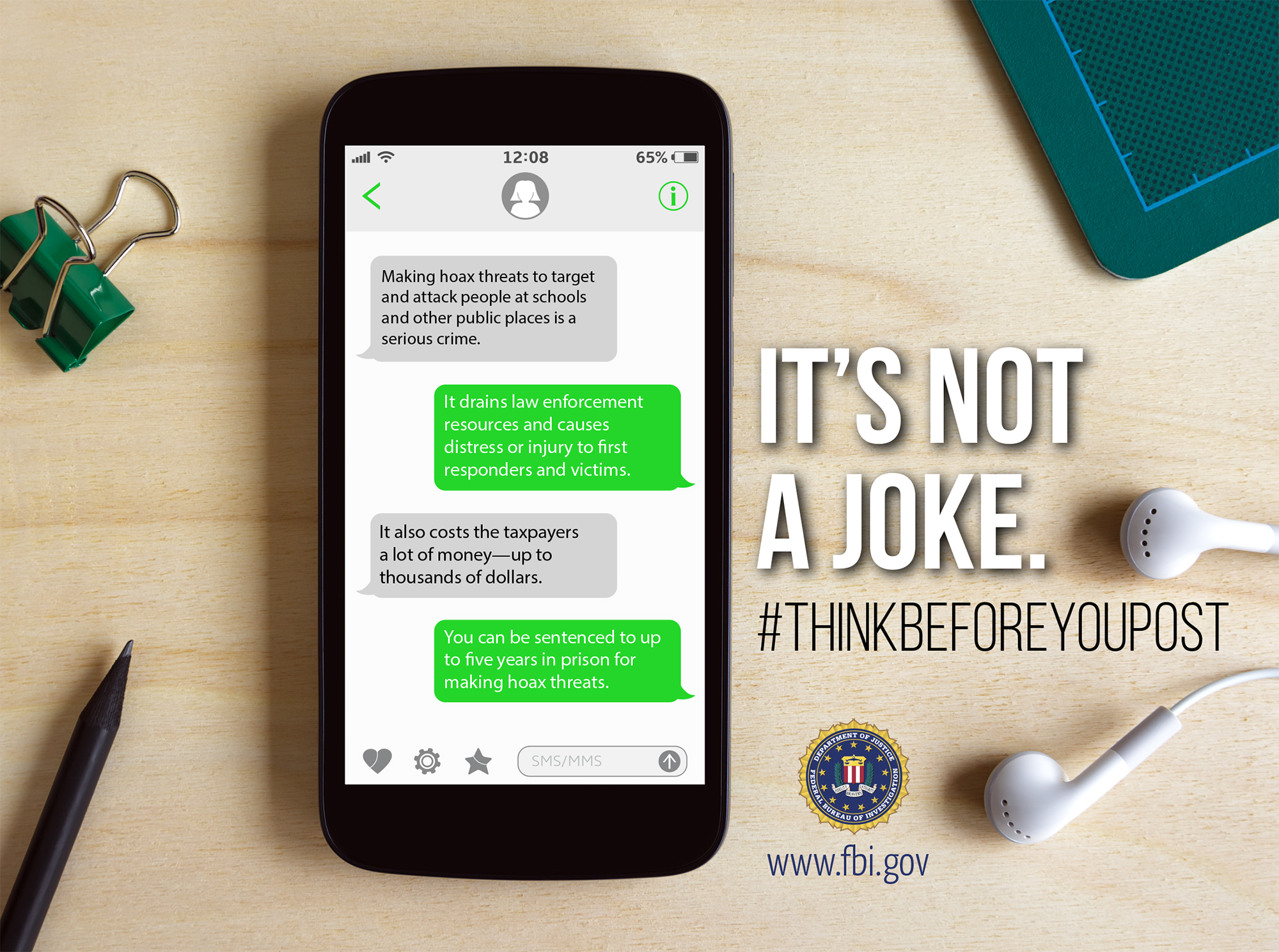 The FBI has an awareness campaign to educate the public about the consequences of making hoax threats of violence to schools, events, and other public places. The Think Before You Post campaign serves to remind everyone that any threat is taken with the utmost seriousness and will be quickly and thoroughly addressed by law enforcement. Hoax threats are not a joke; they are a crime.

In the aftermath of tragic shootings like the ones at Santa Fe High School in Texas and Marjory Stoneman Douglas High School in Florida, the FBI and law enforcement agencies around the country often see an increase in threats made to schools, events, and other public buildings. Issuing a threat—even over social media, via text message, or through email—is a federal crime (threatening interstate communications). Those who post or send these threats can receive up to five years in federal prison, or they can face state or local charges.

The Community Awareness Presentation (CAP) is a shorter, more focused version of the FBI Citizens Academy program and is conducted in partnership with a specific community group, generally at an offsite location. The program is designed to build trust and strengthen relationships between the FBI and the communities we serve. Community groups are encouraged to identify topics that are of concern or relevant to their group or organization for the FBI to discuss. Classes are taught by FBI subject matter experts. Generally the participants are selected by members of their organizations or community and there is no restriction on audience size. To request a presentation, please contact your local FBI field office.