It is with heavy hearts that we mark today’s anniversary of one of the bloodiest massacres in Boston’s history. Thirty years ago, today, in the close-knit community of Chinatown, five men lost their lives, and another man’s life was changed forever.

Today, we are renewing our call for the public’s assistance in locating longtime fugitive Hung Tien Pham, who is wanted for his alleged role in the ruthless, execution-style murders of five men at a Chinatown social club. We are also announcing a reward of up to $30,000 for information leading directly to his arrest.

At approximately 4 a.m. on January 12, 1991, Hung Tien Pham entered the social club located on Tyler Street in Boston and allegedly shot six men in the back of the head while they were playing cards. Of the six victims, only one survived the attack, and subsequently identified Pham, along with two others as the shooters. 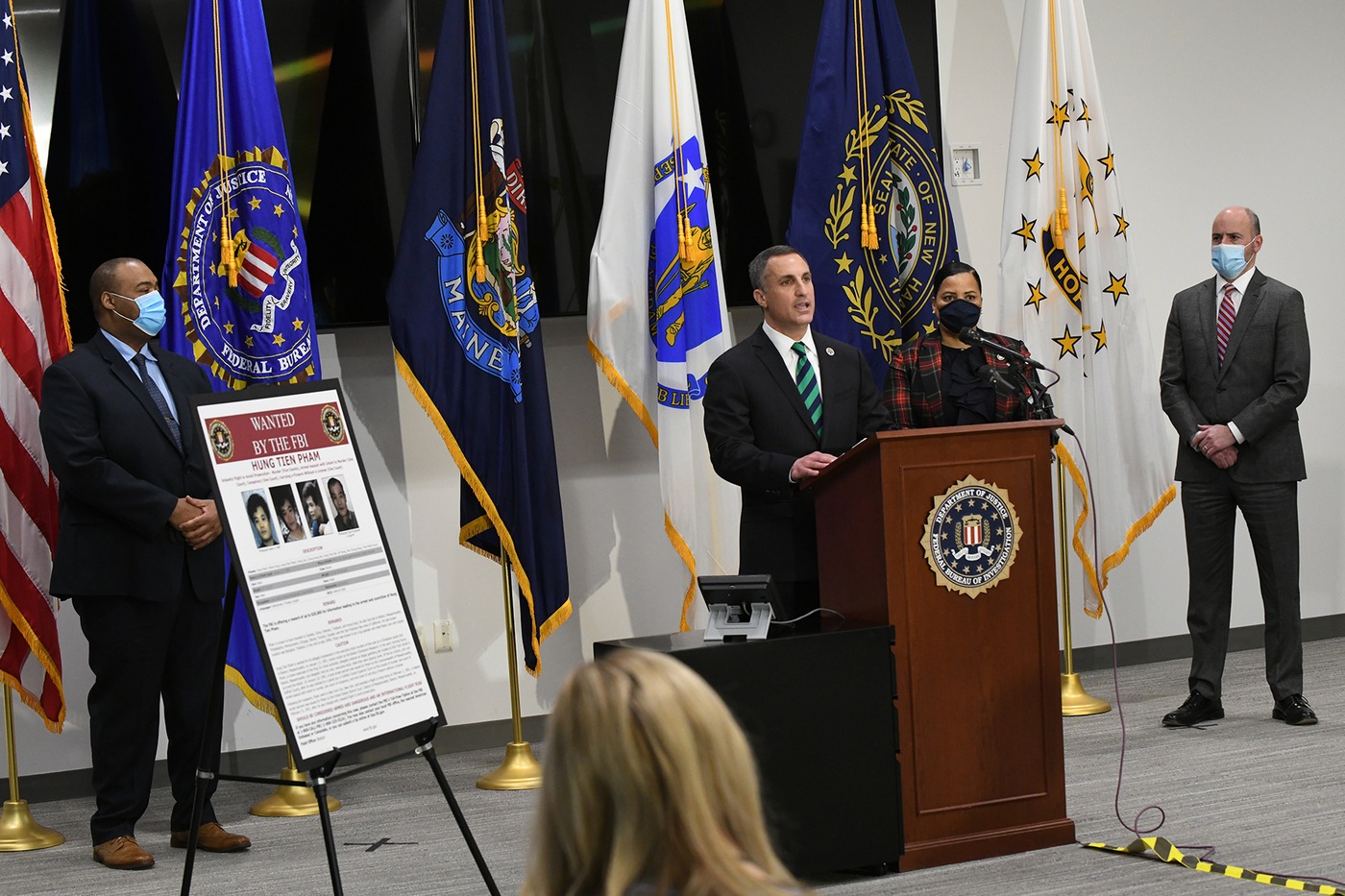 Six days later, Pham was indicted by a grand jury in Suffolk County Superior Court on five counts of murder, one count of armed assault with intent to murder, one count of conspiracy, and one count of carrying a firearm without a license. He is also charged in the District of Massachusetts with unlawful flight to avoid prosecution. Pham is the only defendant in this case who has not been arrested and convicted.

The other men were arrested in China and returned to the United States in 2001 where both are currently serving five consecutive life sentences.

No motive has been officially established.

Shortly after the incident, Pham allegedly left his two children and their mother, and drove to Atlantic City to gamble and then to New York where he boarded a flight for Hong Kong on February 1, 1991.

In addition to this quintuple homicide, Pham is also wanted by the Boston Police Department for another murder that occurred four days before the massacre, on January 8, 1991.

Investigators determined in the 1980s and early 1990s, Pham was an associate of Asian organized crime, specifically the Ping On crime syndicate, operating in Boston, Philadelphia, Chicago, and Toronto. His last known location was Bangkok, Thailand in the mid-to-late 1990s.

Pham was born in Mong Cai, North Vietnam, and still has family there. He also has family in the San Francisco Bay area of California; Toronto, Canada; and South Korea.

Pham is a Vietnamese national of Chinese descent and is fluent in Vietnamese, Chinese, and English. He would now be 60 years old.

At the time of the murders, he had black hair, brown eyes, and weighed between 115 to 135 pounds. He stands about 5'3" tall and resided on Clayton Street in Dorchester. He has a variety of aliases and has held a variety of jobs, including but not limited to a cook, waiter, bicycle repairman, and floor sander. Pham was also known to be a big spender who liked flashy cars and cognac.

We are asking the public to review Pham’s wanted poster which includes newly released photos, along with an age progressed photo of what he may look like now.

We are also launching an international publicity campaign, including but not limited to a dedicated webpage on fbi.gov; social media outreach on Twitter, Facebook, and YouTube; and targeted publicity in the cities to which Pham has been tied. The public can play an active role in helping us find Pham by sharing links to his wanted poster and official social media content.

Despite the passage of the time and an international manhunt, the FBI has not allowed the memory of this gruesome night to fade. An exhaustive investigation has been conducted over three decades on this case, and members of our Violent Crimes Task Force, alongside the Boston Police Department, are constantly pursuing new investigative strategies.

The FBI has a broad reach, and an even longer memory, especially when it comes to finding fugitives. We know this crime has haunted the Chinatown community for decades, and we hope this renewed effort will produce real results that might give the victims’ families— who have already endured so much heartache—some much needed closure. To this day, their losses continue to cause great sorrow, and we urge anyone with information about Pham’s whereabouts to come forward.

We are hoping this reward incentivizes anyone with information about his current whereabouts to contact law enforcement. No amount of information is too small or irrelevant. Even if you don’t know where Pham is now, we would be interested in hearing from you if you know where he has been. And if you see him, immediately contact law enforcement. Do not attempt to confront or apprehend him yourself.

I would especially like to acknowledge the Boston Police Department’s Homicide Unit and the Suffolk County District Attorney’s office for the tireless efforts they have committed to this investigation, as well as the United States Attorney’s Office for the District of Massachusetts for their assistance with the unlawful flight to avoid prosecution charge.

As evidenced by our collective efforts on this case to this day, we will never forget, and we will not rest until Hung Tien Pham is located, arrested, and brought to justice.