Made Threats Against Ex-Husband 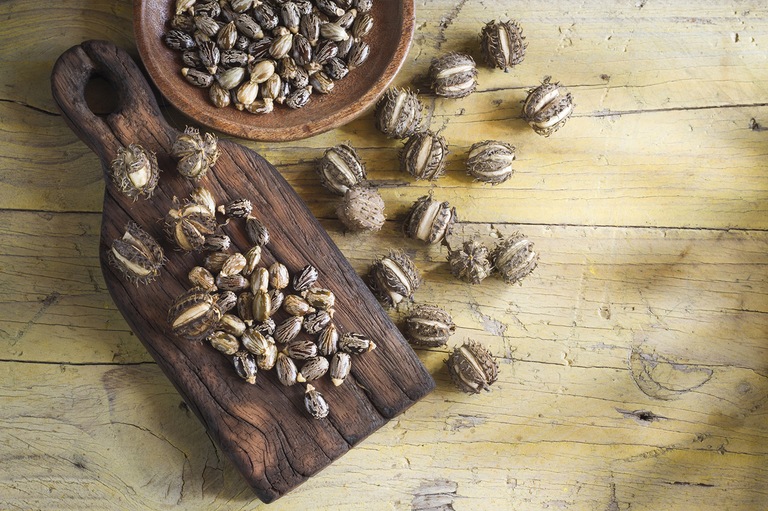 Castor beans, such as those shown above, are used to make ricin and were among the items seized from the kitchen of Danielle Dana Layman during an investigation into her plot to have her ex-husband murdered.

An Oklahoma woman had a novel solution to a child custody issue with her ex-husband who lived in Israel: Hire someone to travel there and kill him using the deadly toxin ricin she manufactured in her kitchen.

But fortunately, the woman who responded to Danielle Dana Layman’s online posting for what was advertised as an overseas acting job soon learned the real purpose of Layman’s offer and reported the plot to the FBI. And Layman, originally indicted in 2017 on a murder-for-hire charge, was subsequently charged with the unlawful possession of ricin and ended up pleading guilty to that charge earlier this year. She was sentenced this past June to a federal prison term.

It all started back in May 2017, when Layman posted an ad: “For production overseas, looking for talent, 30-45 years old. Doesn’t have to be a professional actor. Required: Creative, outgoing and friendly, positive personality, boldness and bravery (some stunts may seem risky, although they are completely safe) …” The ad went on to say that “… you must not disclose any information related to this plot to ANYONE under ANY CIRCUMSTANCES …”

The woman who responded to the ad agreed to an in-person meeting with Layman, who was using a fake name. At this meeting, Layman divulged a different purpose for the trip—claiming to be from Israeli intelligence, she told the woman that she wanted to have an ISIS operative killed. Using a laptop she brought to the meeting, Layman showed her an entire presentation containing instructions on what she was being asked to do, what she should pack, how she would travel to Israel, where she would stay once she got there, and how she should communicate. Layman also showed her a package that she claimed contained ricin.

According to Oklahoma City Assistant Special Agent in Charge Raul Bujanda, who oversaw the FBI’s investigation, “The woman answering the ad left the meeting with Layman—after taking pictures of what she was shown—and immediately reached out to a lawyer friend for advice on what to do. She was very concerned about what Layman had asked her to do.”

The lawyer advised contacting the FBI, which the woman did. Said Bujanda, “She called the Bureau’s Public Access Line on May 9, 2017, the same day as her meeting with Layman. And the Oklahoma City FBI office opened an investigation shortly afterward.”

After conducting a number of interviews and taking other investigative steps, the Bureau was able to quickly verify the woman’s story, uncover the real identity of the person she had met with, determine that the target of the plot was actually the plotter’s ex-husband, and obtain proof that Layman was the one who had placed the online ad. “In addition,” said Bujanda, “we were able to determine that Layman was in a custody dispute with her ex-husband, and that during a recent trip Layman had taken to Israel with her children, the man had filed a court suit demanding visitation rights.”

“Because of the potential for ricin being present, included among those executing the [search] warrant were hazardous materials specialists from the FBI Laboratory and a number of Bureau field offices.”

On June 30, 2017, federal agents executed a search warrant at Danielle Layman’s residence in Ponca City, Oklahoma. “Because of the potential for ricin being present,” explained Bujanda, “included among those executing the warrant were hazardous materials specialists from the FBI Laboratory and a number of Bureau field offices.”

Included in the cache of items taken from Layman’s residence were about 100 castor beans (from which ricin is derived), a mortar and pestle, and printed ricin instructions that contained residue from the making of ricin. The collected evidence was analyzed by the FBI Laboratory.

Layman was arrested shortly after the search. At her sentencing hearing, the federal judge assigned to the case made note of the fact that Layman manufactured the ricin in the kitchen of her family’s home while she was pregnant and while her second husband and children were living in the house. Said Bujanda, “When we collected the mortar and pestle used to make the ricin, we saw that it was well within reach of the children.”

There’s no telling what sort of harm could have occurred had Layman been able to solicit the help of an individual willing to carry out her plan in exchange for a few thousand dollars. “But because of the bravery of one woman willing to come forward and notify law enforcement when she learned of possible criminal activity,” Bujanda said, “we were able to mitigate a threat to people’s lives.”

A Nevada man who stole the personally identifiable information of multiple victims from his former employer and used it to open thousands of fraudulent PayPal accounts will be spending time behind bars.

Seventeen years after 9/11, the FBI is helping to raise awareness about compensation available to first responders who have fallen ill as a result of exposure to toxins in the aftermath of the terrorist attacks.