More Than 60 Victims Left in the Lurch 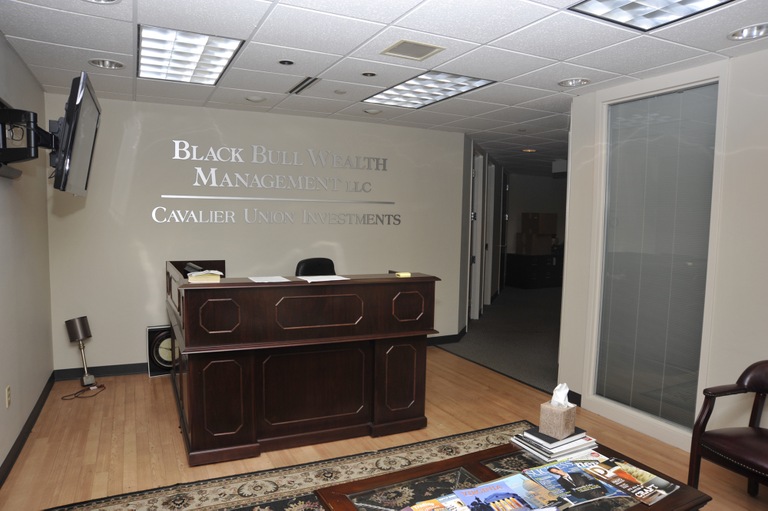 The reception area leading into the Midlothian, Virginia offices of Cavalier Union Investments, LLC and Black Bull Wealth Management, LLC. Both companies were owned and operated by Merrill Robertson and Sherman Carl Vaughn, Jr. and were used to scam millions of dollars from victims as part of an investment fraud scheme.

The victims’ stories of losing their retirement savings in a $10 million fraud scheme were heartbreaking: some lost their homes, some had to declare bankruptcy, and many suffered—and continue to suffer—from physical and emotional ailments upon learning they had virtually nothing left to retire with.

The fraudsters responsible for this fallout—who lined their own pockets with the hard-earned money of working people trying to save for their golden years—were Merrill Robertson and Sherman Carl Vaughn, Jr., two Virginia businessmen. After a joint federal law enforcement investigation into the pair’s Ponzi-like scheme, the two were ultimately brought to justice for their crimes against more than 60 victims in multiple states. In light of Robertson’s earlier conviction at trial and Vaughn’s previous guilty plea, Robertson was recently sentenced to 40 years in prison, and Vaughn—who testified at Robertson’s trial—received 12 years. The men were also ordered to pay nearly $9 million in restitution to their victims.

Robertson is a former University of Virginia football star who had worked for a large broker-dealer and was licensed as a broker. Vaughn had a business degree from another Virginia college but has never been licensed as a broker. Together, in 2010, the pair formed Cavalier Union Investments, LLC, which claimed to be a “leading private investment firm” catering to IRA account holders and offering investment opportunities—with fixed annual returns of 10 to 20 percent—in restaurants, real estate, and alternative energy. Cavalier purportedly had a variety of divisions, investment funds, and investment advisers.

But in reality, Cavalier did not have any divisions, investment funds, or investment advisers—it was just Robertson and Vaughn. And what a pair they were—Robertson no longer had his broker’s license, and Vaughn had filed for personal bankruptcy four times, including the two times he did it while working at Cavalier. Shortly after the company was formed, Cavalier became insolvent and relied on cash from newer investors to stay afloat and pay back older investors who asked for their money back—the perfect Ponzi scheme, at least for a while.

Their company was simply the vehicle that Robertson and Vaughn used to con money from financially unsophisticated victims through family, church, school, and football connections, mostly through Robertson. Robertson identified and solicited the investors, while Vaughn focused on developing the investment “opportunities.”

And these opportunities were bogus—beginning with the fact that while investors thought they were transferring their tax-deferred retirement savings accounts to similar tax-deferred accounts at Cavalier, the company wasn’t even registered or qualified to accept and manage these kinds of accounts.

“These guys took advantage of the common bonds they shared with their victims, and their victims trusted them. ”

Investors’ checks were simply deposited into business accounts—not investment accounts—while Robertson and Vaughn took huge commissions off the top and used investor funds for their own personal living expenses, including mortgage and car payments, school tuitions, spa visits, restaurants, department stores, and vacations. The two men, probably in an attempt to generate goodwill for their company and solicit additional clients, even donated some of their victims’ money to charity, one of which was controlled by Robertson’s family.

The FBI’s Richmond Division became involved in the case in late November 2015 after a referral by the Securities and Exchange Commission (SEC). The SEC had begun its own regulatory/civil investigation into the practices of Cavalier Union Investments several months earlier, and that investigation continues as the SEC seeks permanent injunctions, return of ill-gotten gains with interest, and civil penalties from Robertson, Vaughn, and Cavalier Union Investments.

During the criminal investigation, we worked closely with our partners on the Virginia Financial and Securities Fraud Task Force—and are particularly grateful for the expertise of the U.S. Postal Inspection Service and the Internal Revenue Service-Criminal Investigation Division—along with the Virginia State Corporation Commission. After investigators interviewed victims and analyzed voluminous company records, bank records, and personal finance records of the two subjects—with the invaluable assistance of an FBI Richmond forensic accountant—there was ample evidence to charge Robertson and Vaughn in connection with the fraud scheme.

Several other conspirators of Robertson’s were charged in a spin-off bank fraud scheme—all three have pleaded guilty, two have been sentenced, and the third will be sentenced shortly.

The investigation into Cavalier Union Investments, LLC, according to FBI Richmond case agent David Hulser, should serve as a warning to would-be investors.

“These guys took advantage of the common bonds they shared with their victims,” he explained, “and their victims trusted them. Do your due diligence when offered an investment opportunity, no matter what the offer is and who’s doing the offering.”

If you’re thinking about investing, here are a few tips:

“If it sounds too good to be true,” said Hulser, “it most likely is.”

The SEC also encourages investors to check out the backgrounds of anyone selling investments. Go to its investor.gov website to identify whether they are registered professionals and to confirm their identity.

The owner of several purported sober homes and drug treatment centers in Florida was sentenced to more than 27 years in prison for defrauding insurance companies and forcing patients into prostitution, among other crimes.

The owner of a brokerage company was sentenced to more than six years in prison for defrauding mortgage applicants and banks in the Pittsburgh area while enriching himself in the process.