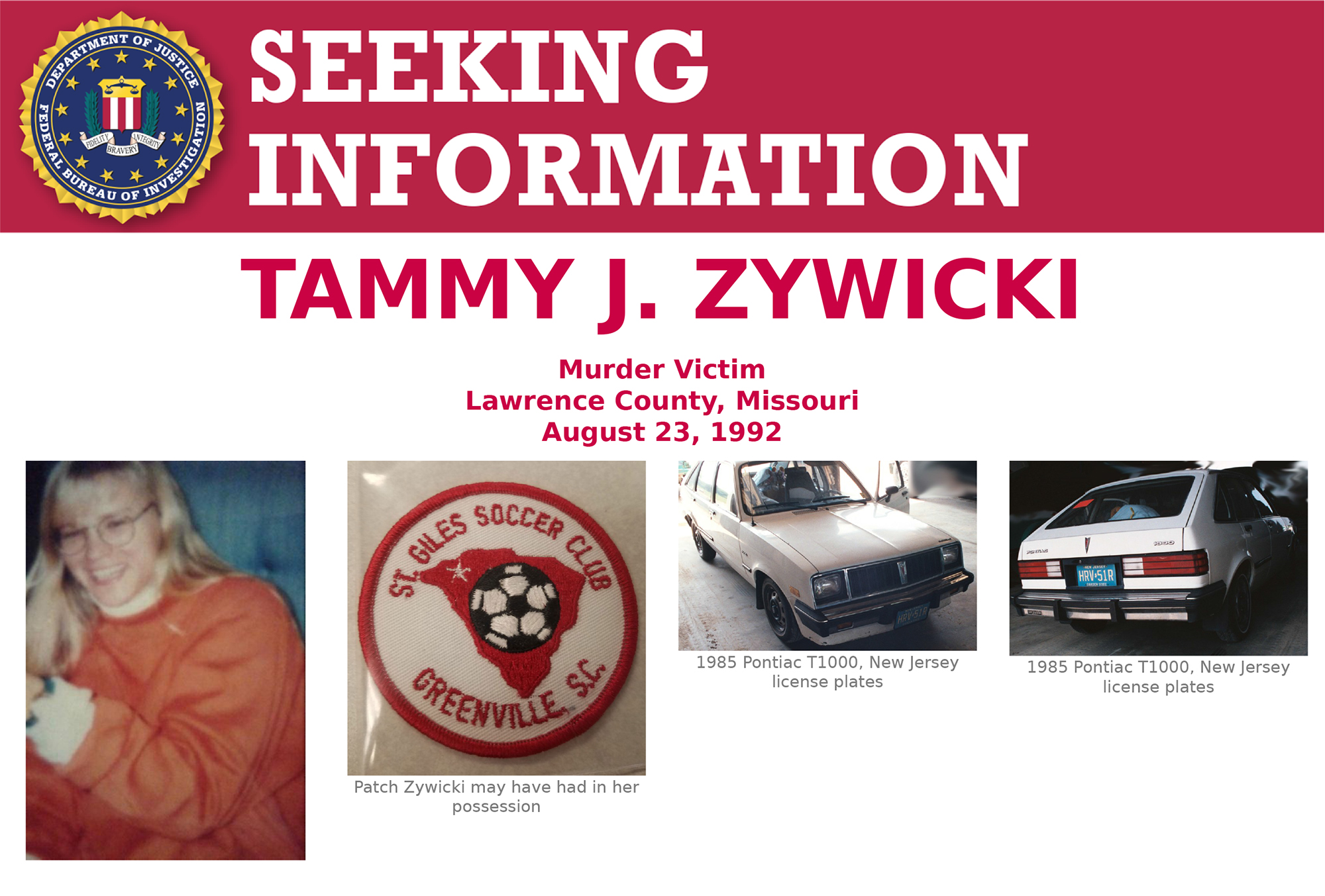 This week marks the 25th anniversary of the tragic kidnapping and murder of Tammy Zywicki, but the FBI and the Illinois State Police have never stopped searching for the young woman’s killer—and they are actively pursuing new investigative strategies that could help solve the case.

On August 23, 1992, Zywicki was a 21-year-old college senior who played sports and was passionate about photography. She had driven her brother to college in Evanston, Illinois, and was on her way to Iowa, where she was in her final year at Grinnell College. Her mother called the Illinois State Police that night to report that her daughter had never arrived.

That afternoon, Zywicki’s car—a 1985 Pontiac T1000—was found abandoned by a state trooper on Interstate 80 near Utica, Illinois. At the time, it was reported that a tractor/trailer was seen near Zywicki’s vehicle, and the trucker was described as a white male about 40 years old, over six feet tall, with dark, bushy hair.

Nine days later, Zywicki’s body, stabbed and possibly strangled, was found wrapped in a sheet and blanket and bound in duct tape—nearly 500 miles away in Missouri.

“A lot of people are still passionate about this case,” said Special Agent Amanda Becker, who has been working on the investigation for the past two years from the FBI’s Chicago Division. “No one has forgotten Tammy—not her family, her high school and college friends, and certainly not law enforcement. I am very motivated to find her killer.”

“These cold case homicides are always difficult cases,” said Lt. Jeff Padilla, an Illinois State Police detective who has been working on the investigation for the past six years, “but this case has so much evidence that still exists, it should help us be able to bring justice to Tammy and her family.”

The FBI and the state police have been working closely together to review and catalogue the extensive amount of physical evidence in the case. The goal is to determine which evidence will best lend itself to the newest forensic techniques for DNA extraction.

Padilla estimated that more than 200 pieces of physical evidence exist in the case file. To date, a definitive DNA profile has only been extracted from one item—a beer can found near where Zywicki’s car was abandoned that may or may not have anything to do with the crime.

“That profile has never returned a match with any known offender,” Padilla said, “and beyond that, we don’t currently have any other profiles because the technology used then was inadequate.”

Advances in DNA testing mean that the same evidence—the blanket, sheet, and duct tape Zywicki was wrapped in, shoelaces found at the scene, and other significant items—could reveal the killer’s DNA.

“I’m hopeful this new technology will help us,” Padilla said. “I am convinced the DNA and the suspect are in the case file. It’s just a question of finding them.”

Some of Tammy’s personal property is known to be missing, including a Cannon 35mm camera, a musical wristwatch with an umbrella on the face, and a distinctive patch issued by Zywicki’s soccer team for only one year. The patch was missing from the shorts she was wearing.

If the killer kept the soccer patch, camera, or watch, Becker explained, a tip from someone who recognized the items could help lead to his capture. “There continues to be a $50,000 reward offered in this case,” she added. “Even after 25 years, a concerned citizen doing the right thing can help us solve this case.”

JoAnn Zywicki, Tammy’s mother, said she was happy that the investigation continues and that the latest DNA techniques will be used. “I’m glad to see they are pursuing that,” she said. “It’s good to see the FBI and the Illinois State Police working together.” She added that her daughter’s tragedy “has brought a lot of attention to how many cold cases we have, and that’s important.”

Milestone years such as the 25th anniversary of her daughter’s death can be particularly hard, JoAnn Zywicki said, but she also sees the positives. “It always amazes me how many people remember Tammy in different ways,” she said. “She did make her mark. She would have been a very successful person. She was well rounded and had a lot of interests, and she was very motivated.”

As to whether Tammy’s killer will ever be captured, JoAnn Zywicki said, “I never give up hope.”

If you have information concerning the Tammy Zywicki case, please contact your local FBI office or submit a tip online.

“There continues to be a $50,000 reward offered in this case. Even after 25 years, a concerned citizen doing the right thing can help us solve this case.”

Students at colleges and universities across the country are being warned of a credit card scheme that enlists them to help purported classmates buy high-end electronics at their campus bookstores.

As the central intake for all public leads and tips made to FBI offices nationwide, the Public Access Line receives and analyzes thousands of calls each day to send to investigators in the field.