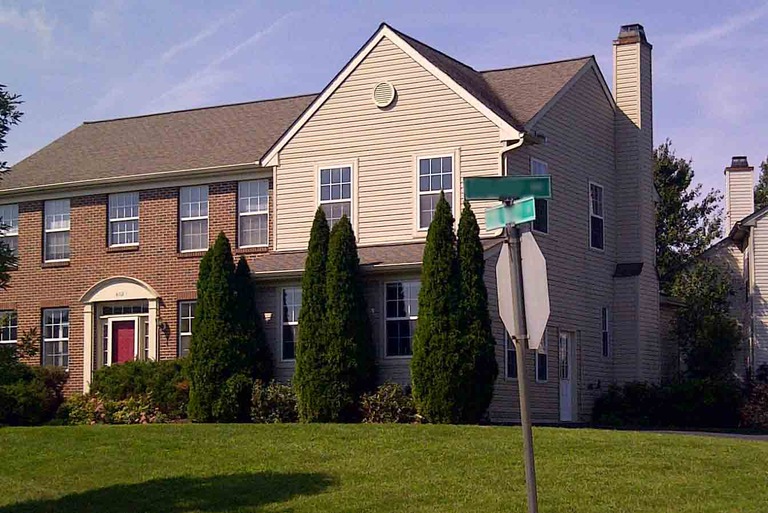 A group of so-called sovereign citizens laid claim to this home in Media, Pennsylvania and fraudulently offered it for sale for $2,000 down and $500 a month. The group illegally claimed 70 properties worth $9 million.

For more than three years, a Pennsylvania group claiming to be sovereign citizens—and therefore not subject to U.S. law—schemed to “steal” dozens of foreclosed homes worth millions of dollars and sell them to unsuspecting victims.

The scheme came to light after local officials in Delaware County, Pennsylvania, received documents declaring sovereign citizen status for three residents. Alarmed, the officials contacted the FBI shortly after receiving the documents in May 2010.

Officials had good reason to be concerned: That same month, two so-called sovereign citizens opened fire on police during a traffic stop in Arkansas, killing two officers. The ambush is just one example of how members of the movement often turn to violence.

Sovereign citizens are anti-government extremists who claim the federal government is operating outside its jurisdiction and they are therefore not bound by government authority—including the courts, taxing entities, motor vehicle departments, and even law enforcement.

They also are prone to engage in numerous types of financial frauds and schemes, based on their skewed interpretation of law.

“Most of these sovereign citizens are extremists,” said Special Agent Walter Szpak, who investigated the case out of the FBI’s Philadelphia Field Office. “When they get arrested, they don’t believe they have committed a crime, and they believe they have the right to retaliate.”

Knowing the potential for criminal and even violent activity by sovereign citizens, FBI agents decided to interview the three people in Pennsylvania who signed the declarations of sovereignty: Steven Hameed, Darnell Young, and Damond Palmer. Hameed and Young were married.

“It’s not illegal to file this kind of paperwork,” explained Szpak. “This is America; they can say whatever they want. But it’s essentially a warning to law enforcement, saying, ‘We’re about to start committing criminal acts.’”

Which is exactly what Hameed, Young, and Palmer were doing. The trio scoured public records to find foreclosed houses in Delaware County, west of Philadelphia. Then they crafted jargon-laden paperwork claiming ownership on 70 properties worth more than $9 million. Most of the homes belonged to the U.S. Department of Housing and Urban Development (HUD) or Wells Fargo bank.

After staking fraudulent claims to the properties, they listed the houses as rent-to-own opportunities on Craigslist at low prices, Szpak said.

FBI agents could not find the three suspects at first to conduct an initial interview about their claims of sovereign status; they did not live at the addresses listed on their declarations. Agents kept looking, using property records to track them down.

“Every time we went to one of these addresses, someone else was living there,” Szpak said. “The tenants told us they had bought or rented the property from the people we were looking for. That’s when we realized what they were doing.”

As the scope of the fraud became more apparent, the FBI was joined in the investigation by other agencies, including HUD, the Federal Deposit Insurance Corporation, the Federal Housing Finance Agency, and several county and local police departments.

In the midst of the federal investigation into the fraud, Hameed, Young, and Palmer were charged by local police for offenses such as trespassing. In response, the three played another trick popular within the sovereign movement: “paper terrorism.” They filed more than 250 fraudulent IRS forms against numerous state and local law enforcement officials and judges. The fake 1099-DIV and 1099-INT forms falsely claimed that the victims had been paid hundreds of thousands or even millions of dollars in dividends or interest.

Because the forms were fake, the victims did not know they had been filed and obviously did not pay any taxes on the income. In some cases, the IRS placed liens against the victims or seized tax refunds they would have otherwise been owed.

“These fraudulent tax forms can have a real impact on victims,” Szpak said. “And, even though they are fake, some of them can remain on victims’ credit reports for years.”

They also added to a growing list of federal charges the trio faced. The three were charged in December 2015 with conspiracy to commit offenses against the United States, bank fraud, and corrupt interference with Internal Revenue laws, among other crimes. All three pleaded guilty in June 2016. Hameed was sentenced to eight years in prison in February; Young and Palmer received shorter sentences in 2016.

The scam left scores of victims in its wake, Szpak said, including people who learned they were not actually home owners. Although HUD and Wells Fargo worked with the unsuspecting victims who bought homes, none were allowed to stay in the homes they thought they owned.

Over the past three decades, Hogan’s Alley—a mock town on the grounds of the FBI’s Training Academy in Quantico, Virginia—has evolved into the cornerstone of the Bureau’s practical training program.

On this day—and every day—the FBI asks the public for help in locating children who have been reported kidnapped or missing.