FBI Has Evolved in Response to Changing Threats 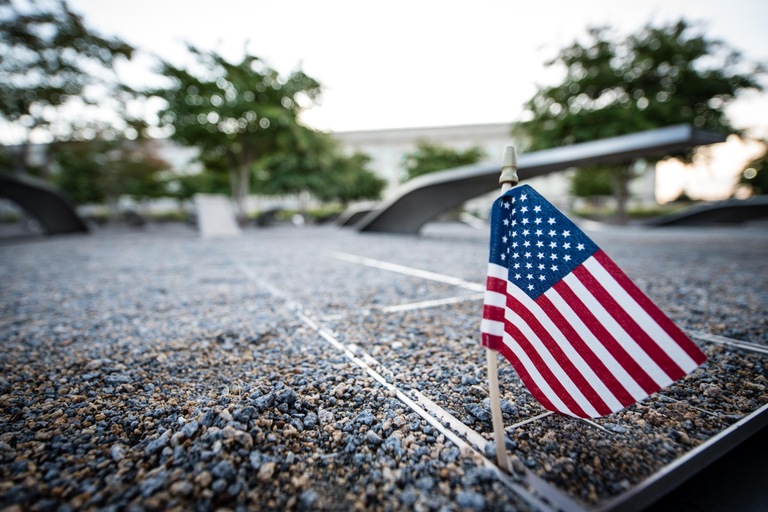 A U.S. flag adorns the landscape at the National 9/11 Pentagon Memorial in Arlington, Virginia.

This weekend, the FBI joins the nation in remembering and honoring the victims of the 9/11 terror attacks, which occurred 15 years ago this month.

It was then that the Bureau began the most massive investigation in its history, after terrorists hijacked and crashed four commercial airliners—two at the World Trade Center in New York, one at the Pentagon, and one in a field in Shanksville, Pennsylvania—killing 33 crew members, 213 passengers, and 2,730 people on the ground. Thousands more were injured.

Since the attacks of 9/11, the FBI has transformed from a reactive, investigative-led model to a proactive, intelligence-driven one where intelligence informs our investigative strategies, enhances our understanding of terrorism threats, and increases our ability to address and mitigate these threats. The terrorism threats against the U.S. have evolved since 2001, but they remain, according to Director James Comey, “persistent and acute,” especially those posed by individuals who are recruited domestically and travel abroad to join the Islamic State of Iraq and the Levant (ISIL), and by homegrown violent extremists who may aspire to attack the United States from within.

In response to these evolving threats, the FBI uses all lawful investigative techniques and methods at its disposal. With our domestic and foreign partners, the Bureau collects and analyzes intelligence information as it pertains to foreign terrorist organizations and homegrown violent extremists. We also encourage information sharing, working closely with the many federal, state, local, and tribal agencies assigned to our Joint Terrorism Task Forces around the country.

“Rest assured,” said Comey, speaking before a congressional committee earlier this year, “the FBI continues to strive to work and share information more efficiently and to pursue technological and other methods to help stay ahead of threats to the homeland.”

The Bureau also strives, on a daily basis, to ensure the safety of the American public from the threat of terrorism and other crimes while safeguarding citizens’ constitutional rights.

After planes crashed in New York and Washington, D.C. on September 11, 2001, employees at the Pittsburgh FBI weren't sure where to respond. Then news came of a fourth plane--United Flight 93--heading their way.

“The FBI continues to strive to work and share information more efficiently and to pursue technological and other methods to help stay ahead of threats to the homeland.”

Remembering 9/11: In Their Own Words:

Special agents who worked on investigations and recovery efforts at the World Trade Center, at the Pentagon, and in Shanksville, Pennsylvania, recalled their experiences in interviews conducted in the decade after the 9/11 attacks.

Special Agent J.P., assigned to the Washington Field Office Joint Terrorism Task Force, was one of three on-scene commanders at the Pentagon.
Special Agent M.G. led the PENTTBOMB team that investigated the 9/11 attacks. "There isn't a week that goes by that I don’t think about September 11th," she said. "It affects who you are."
Special Agent C.C. was the Assistant WMD Coordinator on the National Capital Response Squad out of the Washington Field Office at the time. He set up the first FBI command post at the Pentagon and was the first on-scene commander.

Special Agent A.B. worked near Ground Zero after the September 11, 2001 attacks on the World Trade Center, and served as the liaison between the FBI and the New York City Mayor’s office on victims’ issues.
Special Agent J.S. was a member of an organized crime squad in New York City and responded to the terrorist attacks on the World Trade Centers.
Special Agent J.M. worked at the Bureau’s forensic recovery operations at Staten Island, N.Y., after the attack on New York City on September 11, 2001. She also worked at the Command Post near Ground Zero until it closed at the end of May 2002.

Special Agent D.H. was a member of the Pittsburgh Division’s Evidence Response Team and responded to the crash of United Airlines Flight 93 near Shanksville, Pa. He was one of the first FBI agents on the scene. He worked as a liaison with the mining engineers who handled the heavy excavation equipment at the site.
Retired Special Agent M.S. was one of three supervisory agents from the Pittsburgh Division on the scene after terrorists crashed a plane near Shanksville, Pa., on September 11, 2001. He was in charge of site logistics.
Special Agent A.B. was assigned to the Laurel Highlands Resident Agency in Johnstown, Pa., when terrorists crashed a plane near Shanksville on September 11, 2001. He was one of the first FBI responders to the scene, and later worked at the temporary morgue with the county coroner.
Previous

The sentencing of a Houston man for videos of brutality against small animals brings to a close the first successful prosecutions under a little-known 2010 federal statute.

Eleven years ago this month, 13-year-old Alexandra Anaya's body was discovered in a Chicago river, and the FBI is asking for the public's help to solve the case.