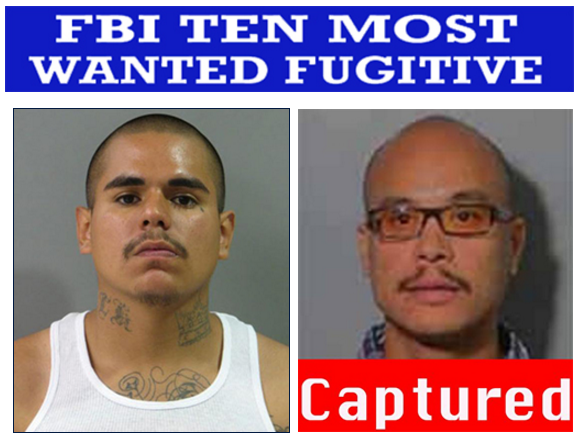 Two men charged with brutal murders have been named to the FBI’s Ten Most Wanted Fugitives list, with rewards of up to $100,000 being offered in each case.

Philip Patrick Policarpio is wanted for the murder of his pregnant girlfriend in Los Angeles on April 12, 2016. At the time of the killing, Policarpio was on parole for a conviction in 2001.

Also added to the Top Ten list is Luis Macedo, a Latin Kings street gang member from Chicago wanted for the murder of a 15-year-old boy in 2009. Macedo led a group of gang members who beat the victim with a baseball bat, shot him, and then set his body on fire.

Twenty-one years old when the murder occurred, Macedo had already been an active gang member since he was a young teen and was in charge of the street crew that set upon the 15-year-old, who was not a rival gang member but was in the neighborhood visiting his girlfriend.

“The murder was classic mob mentality,” said Patrick Johnson, a Chicago Police Department detective who is a member of the FBI’s Violent Crimes Task Force in Chicago and who has been working to locate Macedo.

In the weeks after the killing, Macedo and four of his accomplices were identified. The other four gang members were arrested and were either convicted at trial or pleaded guilty to the crime and are serving prison sentences. Macedo remains a fugitive.

“Over the years, we’ve had unconfirmed reports about him being in Florida and possibly in Mexico,” Johnson said. “He also has family in Wisconsin and Indiana, but the trail has gone cold. We are hoping this substantial reward announced today will bring someone forward.”

Special Agent Scott Garriola, a member of the FBI’s Los Angeles Fugitives Task Force who has investigated numerous Top Ten cases, believes the reward—up to $100,000 for information leading directly to an arrest—may also play a significant role in the Philip Patrick Policarpio case. “The money can be a strong motivating factor,” he said, “and why would anyone want to protect him, considering what he did.”

At a gathering of friends and associates, Policarpio got into an argument with his girlfriend who was 17 weeks pregnant. “In front of everyone,” Garriola said, he began to beat her with his fists, then pulled a gun and shot her in the head, killing her instantly.

A known drug user, Policarpio fled and may have traveled to Las Vegas or possibly the Philippines, where he has family ties. “His pattern is one of violence,” said Garriola, “and he is always armed. He is the definition of a continuing threat to the community.”

We need your help. If you have any information regarding Policarpio or Macedo, please contact your local FBI office, the nearest U.S. Embassy or Consulate, or submit a tip on our website. Both men should be considered armed and extremely dangerous.

Macedo and Policarpio are the 507th and 508th individuals to be named to the FBI’s Ten Most Wanted Fugitives list. Since its creation in 1950, 475 of the fugitives named to the list have been apprehended or located—157 of them as a result of citizen cooperation.

Inside the case of a New York man recently sentenced for his support of ISIL.