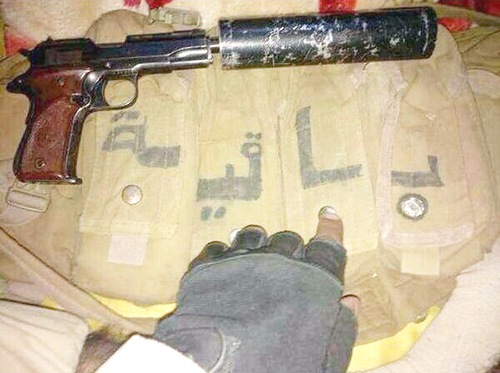 Mufid Elfgeeh was arrested in 2014 when he took possession of two handguns and two silencers he bought for $1,000. In March, he was sentenced to 270 months in prison for his role in supporting ISIL.

A New York man was recently sentenced to more than 22 years in prison for attempting to provide material support to the Islamic State of Iraq and the Levant (ISIL)—and an FBI investigation revealed that he was dangerously close to shifting from support to violent jihad on U.S. soil.

Described as one of the first ISIL recruiters ever apprehended, 32-year-old Mufid Elfgeeh was arrested in Rochester in May 2014, just weeks after ISIL had been officially designated a terrorist organization.

Born in Northern Yemen, where he was introduced to radical Muslim teaching at an early age, Elfgeeh moved to Brooklyn, New York as a teenager to be with his father and later relocated to Rochester, where he ran a small pizza shop.

He became increasingly outspoken about his radical religious beliefs—so much so that he was asked to leave three different Rochester mosques, according to FBI agents who investigated the case out of the Bureau’s Buffalo Division. In late 2013, a concerned individual in the community—and a trusted FBI source—alerted members of the Rochester Joint Terrorism Task Force (JTTF) about Elfgeeh’s actions.

Elfgeeh actively recruited and attempted to send two individuals to Syria to fight on behalf of ISIL. He sent anti-American ISIL propaganda videos to one of the individuals and paid for his passport. He provided guidance about traveling to Syria, along with an overseas contact to coordinate the trip. Fortunately, both individuals were cooperating with the investigation. Elfgeeh also sent $600 to a third man in Yemen to travel to Syria to fight for ISIL.

In addition, he used social media to declare his support for violent jihad and ISIL, and encouraged others to do the same. Unbeknownst to Elfgeeh, though, JTTF investigators were monitoring his every move.

During the 18-month investigation, Elfgeeh started to see himself as more than a facilitator and began discussing targeting U.S. servicemen. “Killing U.S. veterans was justified in his mind,” said an FBI agent assigned to the investigation. “He had stated, ‘we kill them as they kill us.’ ” Later, Elfgeeh approached an individual he believed was a fellow jihadist—who was cooperating with the FBI—and wanted to buy weapons.

“He had debts and little money,” said the FBI agent, “but he came up with a $1,000 to buy two handguns and two silencers, money that should have gone to paying his next month’s restaurant bills. At that point,” the agent added, “the investigation changed—from a guy who was providing financial support and attempting to recruit people, to someone who was planning an attack. In our minds he was in the final stages of an operation. Nobody gets two guns with silencers for personal protection.”

JTTF investigators arranged for the gun purchase—real handguns that were rendered safe so they could not be fired. When Elfgeeh took possession of the weapons, he was arrested. “We knew we had to get him off the street,” the agent said.

Elfgeeh was indicted on a variety of charges stemming from his terrorist activities, and in December 2015 he pleaded guilty to his role in providing support to ISIL. In March 2016, he was sentenced to 270 months in prison.

The FBI agent who supervised the investigation credits local, state, and federal JTTF partners with their tireless efforts in bringing Elfgeeh to justice and making sure he was not able to hurt anyone. “Everyone in the community recognized that he was a threat to public safety,” he said.

Two men charged with brutal murders have been named to the FBI Ten Most Wanted Fugitives list.