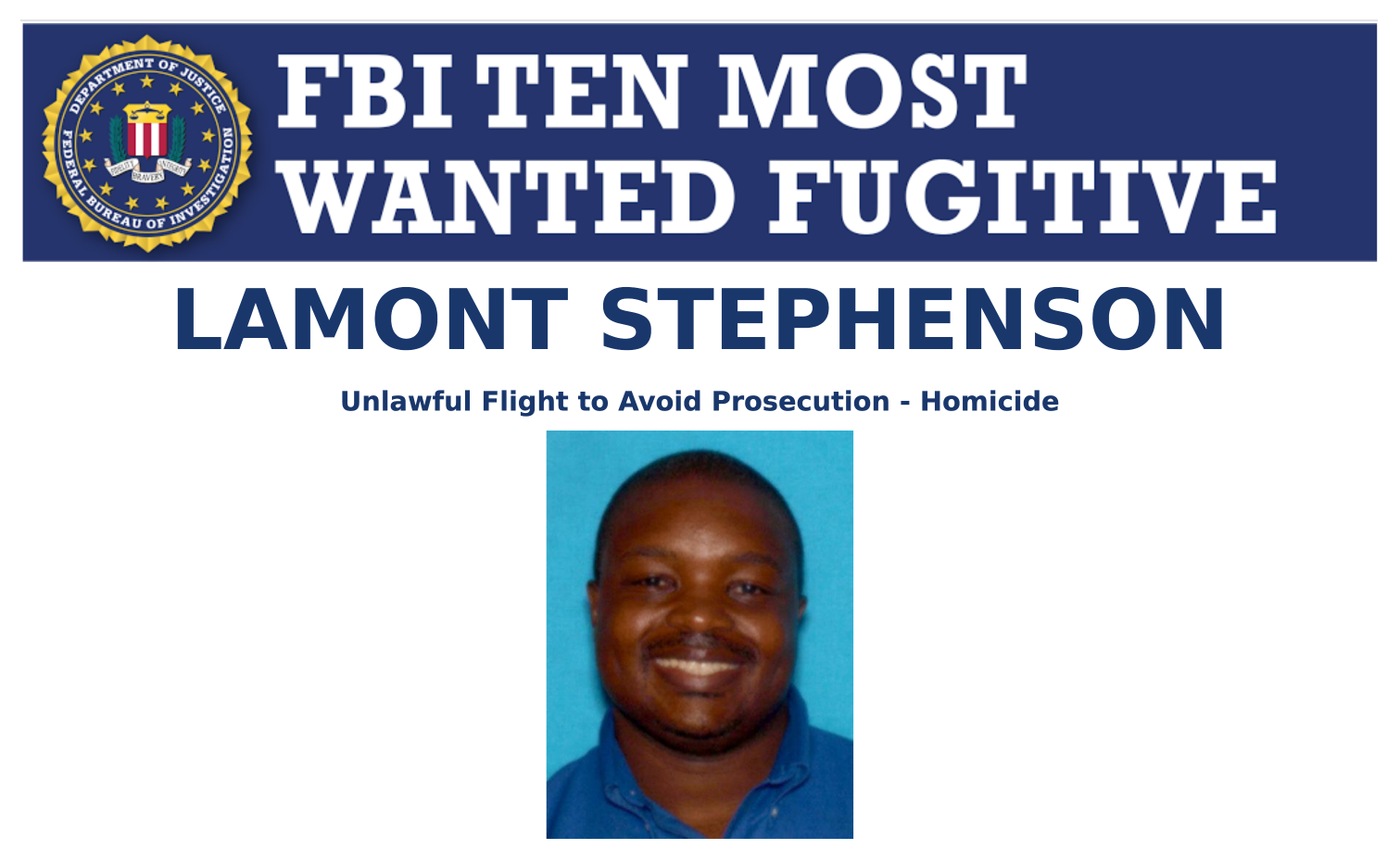 A New Jersey man wanted for murdering his fiancée is the latest individual to be added to the FBI’s Ten Most Wanted Fugitives list, and a reward of up to $100,000 is being offered for information leading to his capture.

Lamont Stephenson is charged with the strangulation death of his fiancée in her Newark apartment in October 2014. He also killed the woman’s dog before calling a cab to take him to Newark’s Penn Station, where investigators believe he fled the state by bus or train.

The 40-year-old victim and Stephenson had apparently known each other as teenagers and met again in 2014 at a high school reunion. “They had a whirlwind romance and were engaged to be married,” said Special Agent Carl Priddy, who is investigating the case from the FBI’s Newark Division.

“For him to be calm and collected after he had just strangled his fiancée shows a certain coldness and calculation. He is definitely capable of doing this again.”

Since the day of the murder, October 17, 2014, Stephenson “has been completely off the radar,” Priddy said. “Compared to a lot of other subjects we go after, Stephenson has been difficult to find because he had no criminal history. Apart from his picture, law enforcement does not have even a set of fingerprints to help identify him.”

The investigation has, however, provided clues to where Stephenson might be hiding, and a possible motive for the murder.

The fugitive has close family members in Virginia and the Carolinas and has spent time in those places in the past. “He could have assumed a different identity,” Priddy said. “Nobody in Virginia or the Carolinas would have reason to believe he is wanted for a brutal murder.”

Being named to the FBI’s Ten Most Wanted Fugitives list means that the Stephenson case will get nationwide publicity and increases the odds that individuals outside of Newark will recognize him and come forward. “The $100,000 reward is also a strong incentive for people to help us apprehend him,” Priddy said.

Regarding a possible motive for the murder, friends and family of the victim told investigators that Stephenson was very possessive and controlling of her. “They had a fairly short courtship before they were engaged and he moved in with her,” Priddy said. “People close to the victim said they were surprised by how quickly it happened.”

“To strangle someone to death is an act of rage,” noted Christopher Smith, a detective in Essex County, the New Jersey jurisdiction that charged Stephenson with homicide. “God forbid he is living with another woman and he’s that possessive. He could do this to someone else.”

“There is no doubt that Stephenson is a threat to the community and should be considered extremely dangerous,” Priddy said, adding that surveillance video at Newark’s Penn Station recorded shortly after the murder showed Stephenson to be acting calmly and with no outward signs of anxiety.

“He wasn’t in a panic at all,” Priddy said of the video images. “For him to be calm and collected after he had just strangled his fiancée shows a certain coldness and calculation. He is definitely capable of doing this again.”

If you have information regarding Lamont Stephenson, please contact your local FBI office or the nearest U.S. Embassy or Consulate, or submit a tip online.

The mastermind of a $2 million scareware scheme that targeted readers of a Minneapolis news website has been sentenced to nearly three years in prison.

Seven GRU military intelligence officers have been charged with hacking into the computer networks of U.S. and international organizations, including those cracking down on Russia’s state-sponsored doping activities.