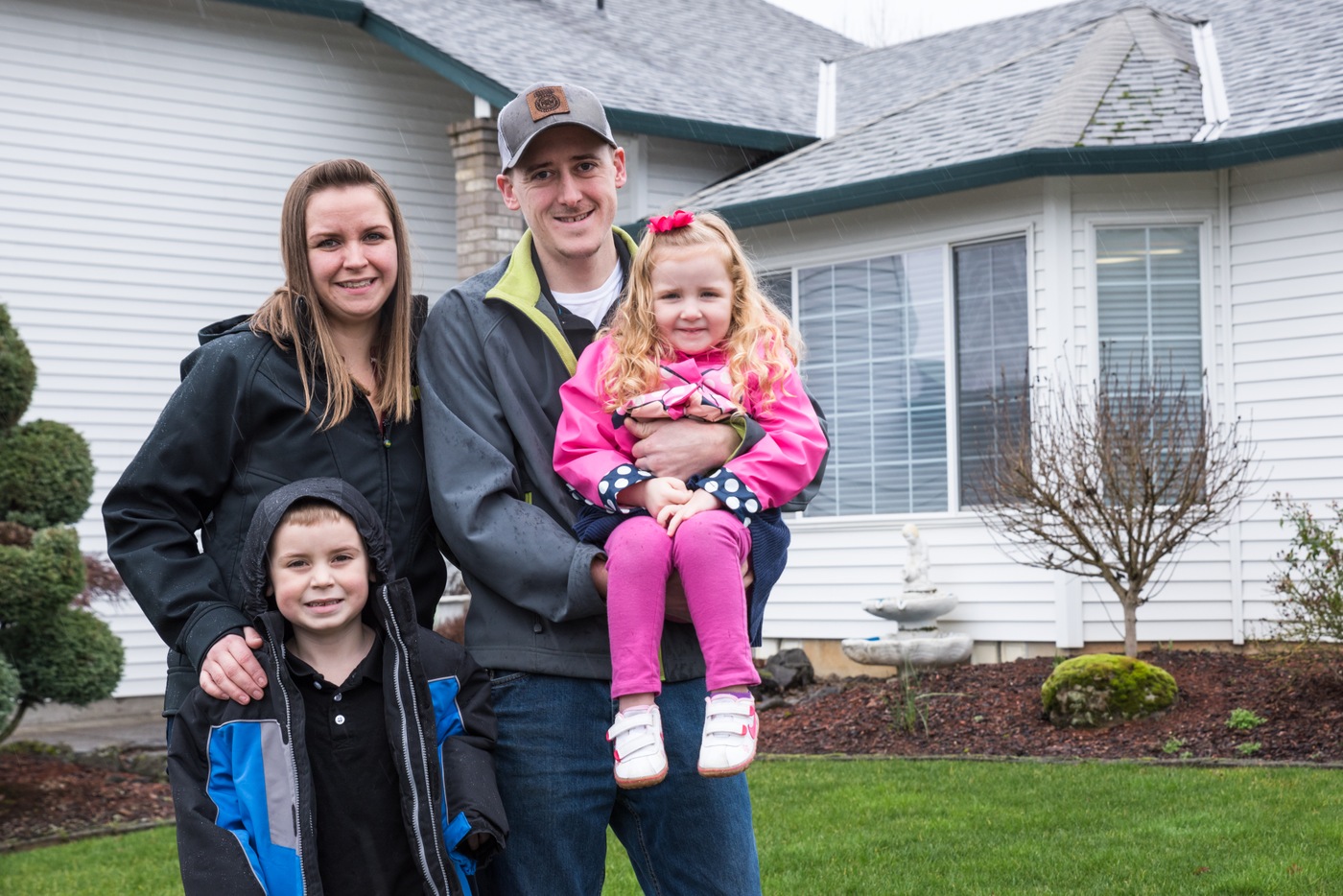 Aaron Cole and his family stand in front of the home that was nearly taken from them by online fraudsters and money mules. Photo courtesy of Melissa Toledo for WFG

Like many Americans, Aaron Cole and his wife had been able to save up a nest egg through the rising value of their home. But after six years there and the births of their two children, the Oregon couple decided to sell and use the equity they had built up to purchase a slightly larger place.

After they had sold their current home, Aaron Cole received word that his title company would be in touch soon with the wire instructions for sending the down payment required to close on the new house. When an email arrived on December 4, 2018, from what appeared to be the title company, Aaron's wife went to the bank and sent $122,850 to the account number provided in the message.

A few days later, the title company called to tell Aaron Cole it was time to wire over the down payment. Was he ready for the account information?

It took the representative from the title company just moments to figure out what had happened: The Coles had been the victims of a business email compromise scam and had wired their money to a criminal who had spoofed the title company’s email address and sent them fake wire instructions.

The family’s savings was gone. Their down payment had been funneled into one account and then broken up and sent to four other banks. Within days, the money would be on its way out of the country and into the control of those who carried out the scheme.

The Cole family had already sold their existing home with a move out deadline of December 23. Now, they couldn’t complete the sale of their new house, had little left in savings, and in a few weeks would have nowhere to call home.

“I’m never at a loss for words,” said Aaron Cole. “When this happened, I couldn’t come up with the words to tell my wife.”

What happened to the Coles was due to the deliberate actions of the online criminals who compromised an email account to steal from them, but the criminals could not have carried out the scheme without the involvement of money mules.

The FBI defines a money mule as a person who transfers illegally acquired money on behalf of or at the direction of another person. Money mules often receive a commission for the service or provide assistance because they believe they have a trusting or romantic relationship with the individual who is asking for help moving money.

Money mules may or may not be aware of the role they are playing in a crime, but the actions they take do serious harm to people like the Coles and millions of other innocent victims of online scams and frauds.

Aaron Cole will be the first to tell you how devastating the loss was. “The equity in the house was our way to move forward,” he said of the theft. “I put myself back 15 years.”

In the Coles’ case, the title company generously helped the family cover their down payment in exchange for Aaron Cole’s help alerting others about business email compromise. The title company was seeing homeowners hit with this crime despite the warnings about fraud and account security they put on every document they send to clients.

Aaron Cole, like many people, skimmed right over those messages in the mass of paperwork that accompanies the process of buying and selling a home. Cole said, “I grew up with computers. I know not to click on anything suspicious. Nothing about this looked suspicious.”

The title company hopes that a human face and a very human story about what can happen will make more people aware of the crime and on guard against it.

Prowell, who spent days tracking the path the Coles’ money made from bank to bank, was successful in seizing some of the assets and saving about 30 percent of the funds the Coles lost. But those assets, because of the legal process involved, would not have made it back to the Coles fast enough to save their home. “The quickest forfeiture process I’ve seen has been about 12 months,” said Prowell.

He stressed that even though it was a good ending for the Cole family, the title company will absorb the rest of the losses. “This is a small title company,” Prowell said “But it was a small company with a heart.”

Prowell is also hopeful Aaron Cole’s story will raise awareness about business email compromise and the need to be vigilant about online security.

Cole said he used the same password for several email and social media accounts and hadn’t changed them for a while. The criminals could have been monitoring his accounts for years using a simple software that watches for keywords that may indicate money is about to move.

In addition to strong passwords and better awareness, Prowell says people should revert to old fashioned means of verification before sending money. “Go check in person,” he said. “Or pick up the phone and make a call.”

But Prowell also wants those who act as money mules to understand the harm they are doing to others and the peril they are exposing themselves to. First and foremost, acting as a money mule is illegal. Those performing the function can face criminal prosecution, damage to their credit standing, and financial liability for the money they move.

People who agree to allow others to use their bank accounts or open new accounts for these purposes are also linking themselves to criminal organizations. One of the money muling groups involved in Aaron Cole’s case was part of a separate FBI investigation into financial and violent crimes. “These groups are not always just fraudsters,” Prowell said. “That particular group was also dangerous.”

A money mule is someone who transfers or moves illegally acquired money on behalf of someone else. Some money mules know they are supporting criminal enterprises; others are unaware that they are helping criminals profit. Don't be a mule.

During a recent eight-week campaign to combat money mules, the FBI partnered with other federal law enforcement agencies to interview more than 550 individuals. They served more than 500 warning letters on individuals who served as money mules for fraud schemes. The letters informed recipients that they could be prosecuted if they continue.

Additionally, more than 30 individuals were criminally charged, in part, for their roles in receiving victim payments and providing the fraud proceeds to accomplices. Abbott stressed that banks and law enforcement take note of unusual account activity: “Anyone who continues to participate in this type of activity should be prepared to hear from the FBI or our partners.”

Learn more about money mules and help raise awareness by sharing the facts through #DontBeAMule.

Signs You May Be Acting as a Money Mule

How to Protect Yourself

How to Protect Yourself Against Business Email Compromise

Verify email addresses: Carefully check the address of any message that contains a link, attachment, or instructions. Criminals will make small changes to email addresses to make them appear as if they have come from a trusted source.

Double check: Never make a purchase, send a payment, or make a financial transaction based on email instructions only. Follow up on such requests by checking in person if possible or making a phone call. Do not use the phone numbers provided in the email in question.

When shopping online during the holiday season—or any time of year—always be wary of deals that seem too good to be true, and do your part to avoid becoming a scammer’s next victim.