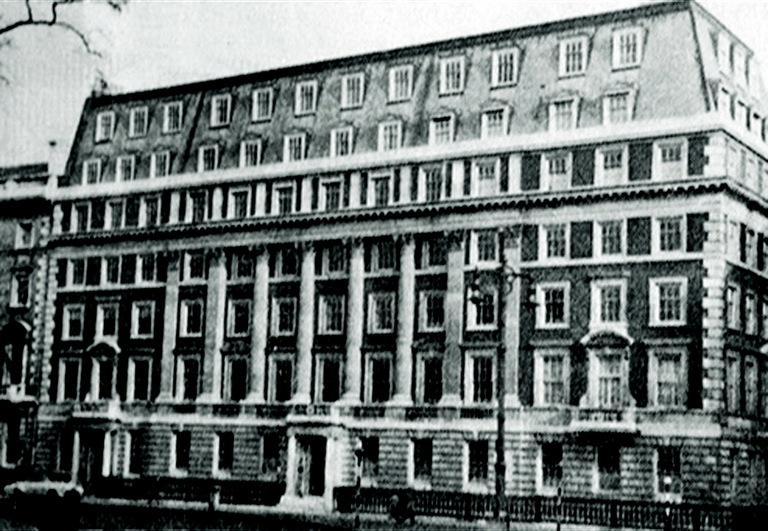 The FBI’s legal attaché office in London was in the U.S. Embassy building at 1 Grosvenor Square.

Seventy years ago this coming Monday, Arthur M. Thurston was officially named legal attaché of the U.S. Embassy in wartime London. Three months earlier, on November 16, 1942, he had, at the invitation of U.S. Ambassador John Winant, opened the office for liaison purposes in the 1 Grosvenor Square embassy. Now, as “legat,” Thurston was already highly connected with his colleagues in MI-5 and MI-6.

It was a fearful time to be in London (see sidebar below), but an enormously productive time as well. British intelligence had developed Ultra—which intercepted and later decoded radio and cable messages sent by the Nazis to their clandestine networks worldwide. Thurston was given access to the decrypted messages in January 1943 and, under the codename Ostrich, forwarded intelligence to FBI Headquarters that related to possible German espionage in the United States. Ultimately, Ostrich would crucially assist our mandated intelligence operations in South America, control movement of double agents, and penetrate German intelligence. Postwar, there would be crucial legat assistance and liaison in the Klaus Fuchs exposé. Even by 1951, when the office was staffed with a single agent and two clerks, Legat John Cimperman was putting in 11-plus hour days and had 235 open cases that were pending resolution. Gamely, he described that time as “an unusually light period.”

World War II was a difficult and dangerous time for the FBI’s new overseas office in London. In the words of then-Legal Attaché Thurston: “During these three periods—air raids, flying bombs, and V2 rockets—the Bureau’s office in the American Embassy continued to function. The flying bombs that flew over the Embassy in the daytime were viewed from the office windows. At night, the German raiders were observed from hotel windows or from the street and to the tune of anti-aircraft and rocket guns situated in all the parks and atop strategic buildings. The nearest approach to disaster was during the V2 rocket period, when a rocket fell at Marble Arch. In addition to killing several people, the residence quarters of Bureau representatives was made a mass of flying glass and shattered doors, but no casualties apart from a commode which the blast ricocheted off the wall and struck one of the representatives in bed—but even this only resulted in a broken commode handle.”

And so began the friendships and cooperative relationships between the FBI and British law enforcement and intelligence services that flourish to this day.

Today, Legat London is staffed with Legal Attaché Scott Cruse, a deputy and five assistant legats, an intelligence analyst, and four office administrators. And guess what? They are still putting in 11-plus hour days. It is an incredibly busy and intense office, thanks to a world in turmoil.

Yesteryear’s threats of wartime and postwar espionage have given way to 21st century threats to national security—notably international terrorism, the FBI’s top priority. And without the help of our international partners, we could not be successful.

Consider the recent extradition of five alleged terrorists from Mildenhall Royal Air Force Base in the U.K. on October 5, 2012. Following U.S. charges, all had been arrested by our British colleagues—one in 1998, one in 1999, and three in 2004. All fought extradition in the U.K. and, when that failed, all appealed to the European Court of Human Rights on the grounds that, among other things, U.S. sentences were too long. After they had exhausted all appeals, Legat London worked with the U.K.’s Crown Prosecution Service and the London Metropolitan Police Service’s SO15 counterterrorism branch and extradition unit—not to mention with our U.S. military and federal partners—to coordinate the high-profile transport of Abu Hamza Al-Masri, Adel Abdel Bary, and Khalid Al-Fawwaz to New York City and Syed Talha Ahsan and Babar Ahmadto New Haven, Connecticut.

We thank our partners in the U.K. every single day for sharing information that protects both of our countries and brings terrorists and criminals to justice. Michael S. Welch, assistant director of our International Operations Division, says it well: “In today’s era of asymmetrical threats, only the closest relationships among law enforcement and intelligence personnel and their most determined will to share intelligence can help all of us identify, disrupt, and prosecute international criminals and terrorists.”

This story is Part 2 of an occasional series on our legal attaché program.

Inside the case of a courthouse bomber whose motive was to collect a reward in the case.

Our continuing series goes behind the scenes at the HRT’s New Operator Training School.