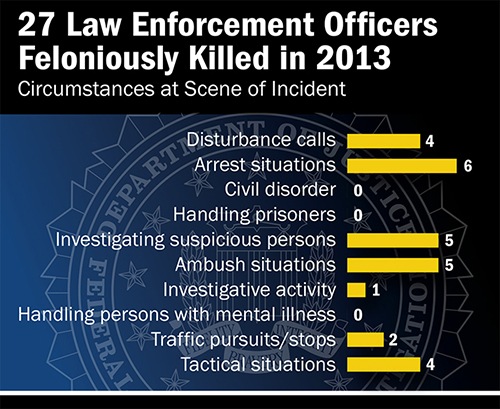 A Florida sheriff’s officer, responding to a report of a domestic disturbance at a residence, was shot and killed by someone inside the home. An Iowa police officer was shot and killed while attempting to serve an arrest warrant. A Michigan state trooper was fatally shot during a routine traffic stop. And a West Virginia sheriff was ambushed and fatally shot in the head while he was eating his lunch in a marked car.

According to the just-released Law Enforcement Officers Killed and Assaulted (LEOKA) report, these four officers were among the 76 men and women killed in the line of duty during 2013—27 died as a result of felonious acts, and 49 died in accidents. Another 49,851 law enforcement officers were victims of line-of-duty assaults. Proof positive of the dangers that all officers willingly face, day in and day out, to protect the rest of us.

New to LEOKA is the addition of detailed data concerning assault victims. Although this year’s detailed information on assaults was only received for 78 officers, submissions are expected to increase over time. More details.

The information in the report comes from various sources—the law enforcement agencies participating in the UCR Program, FBI field offices, and several non-profit organizations, such as the Concerns of Police

The goal of the FBI’s LEOKA program is to provide data and training that help keep law enforcement officers safe as they serve and protect our nation’s communities. Later this week on our website, we’ll focus on what LEOKA is doing, beyond its annual report, to further that goal—specifically, the extensive research being done on collected data (including studies involving interviews with individuals convicted of police killings) and the incorporation of that research into the officer safety awareness training conducted by the LEOKA program for partner agencies. While the annual LEOKA report, released earlier this weeks, offers a stark reminder of the dangers police face every day, the main reason for gathering the comprehensive data about line-of-duty fatalities, assaults, and accidents is to prevent them from occurring in the future.