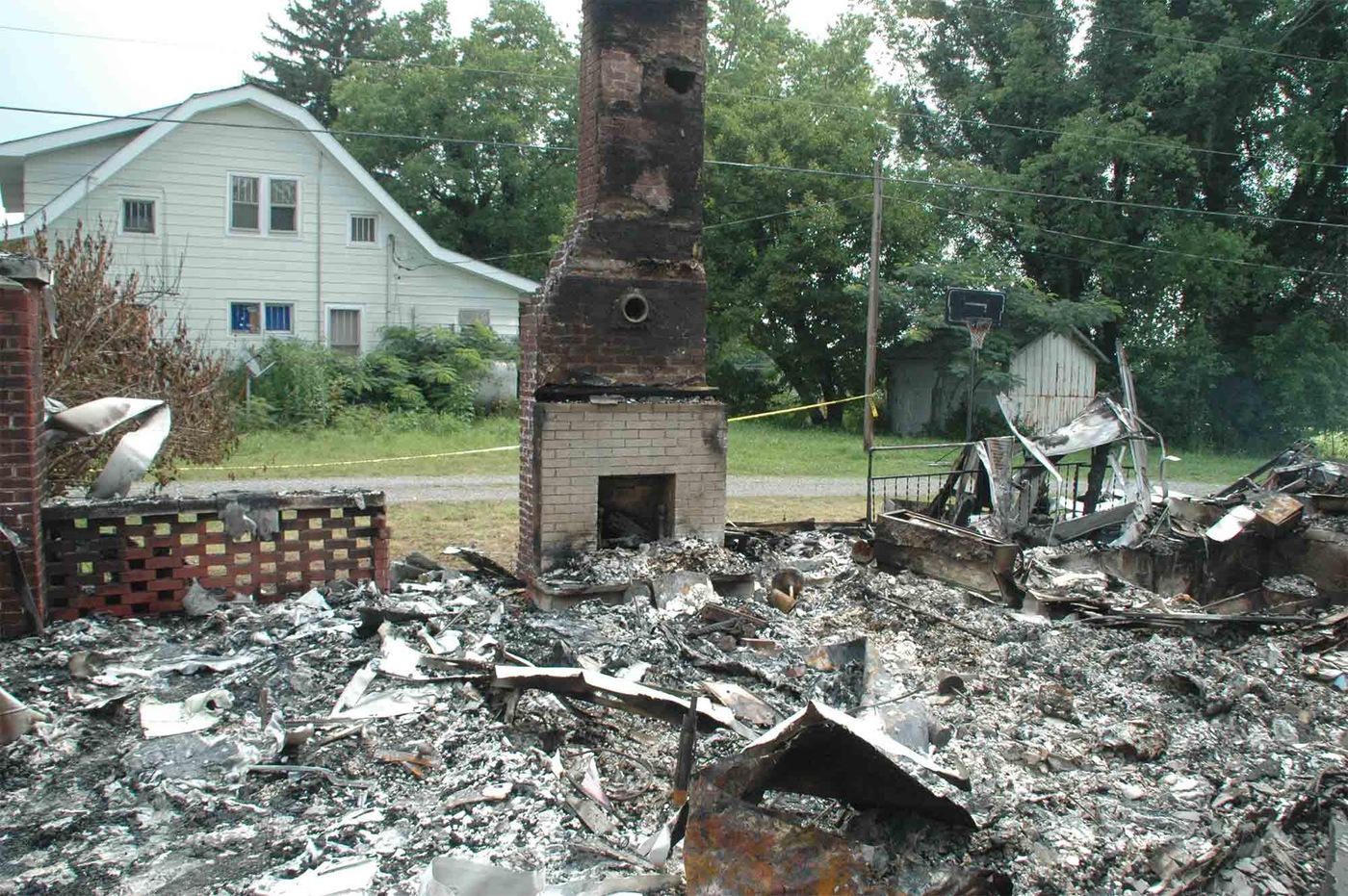 A June 2011 fire completely destroyed this home rented by Steve and Brandi Pritchard in Columbia, Kentucky, leaving little for arson investigators to go on and nearly allowing the couple to escape prosecution.

A Kentucky couple nearly escaped prosecution for setting a fire that burned their rented home to the ground and led to the death of a firefighter until a new FBI agent’s search for fresh evidence helped bring them to justice.

Steve Allen Pritchard, 44, was found guilty by a federal jury of arson and insurance fraud and was sentenced on November 1, 2018, to 30 years in prison. His wife, Brandi Pritchard, who was his girlfriend at the time of the fire, was sentenced to 121 months after pleading guilty to the same crimes.

“This case has stayed with me because it was just so senseless,” said FBI Special Agent William Kurtz of the arson investigation he supported through the FBI’s Bowling Green Resident Agency out of the Louisville Field Office.

According to case records, on June 24, 2011, Brandi Pritchard purchased a $50,000 renter’s insurance policy for the furniture and possessions within the rented Columbia, Kentucky, home she shared with Steve Pritchard. In the early morning hours of June 30, 2011, prosecutors charge that one or both of the Pritchards set fire to the home and then fled the scene.

As firefighters arrived just past 3 a.m., the structure was engulfed in flames. First responders had just succeeded in bringing the fire under control when Columbia/Adair County Fire Department Assistant Chief Charles Sparks, 49, suffered a heart attack.

When firefighters turned their focus to aiding their ill colleague, Kurtz reported, “the fire rekindled and burned the house to the ground.” Sparks died eight days later at a Louisville hospital. Firefighter fatality investigators determined the physical exertion involved in responding to the fire may have triggered his heart attack.

The firefighter’s death prompted an investigation of the fire, but “because the house burned to the ground, any forensic evidence that could have pointed to an arson was destroyed,” said Kurtz.

Immediately after the fire, Brandi Pritchard made a claim against the renter’s insurance policy. She admitted later that Steve Pritchard directed her to invent or inflate the value of items lost during the fire in order to receive the full $50,000 in the policy.

The Kentucky State Police opened an arson investigation after members of the community reported hearing Steve and Brandi Pritchard brag about setting the fire, but investigators had little to go on beyond hearsay.

“Because the house burned to the ground, any forensic evidence that could have pointed to an arson was destroyed.”

In their initial interviews with investigators, Steve Pritchard claimed he left the house around midnight on the night of the fire to drive to Louisville on a delivery for his employer. Brandi Pritchard said she had left for work hours before the fire started.

Kurtz said the Kentucky State Police reached out to the FBI two and a half years after the fire in hopes that agents could provide a fresh set of eyes on the case and maybe shake out new information. Kurtz, who was previously an intelligence analyst with the FBI’s Counterterrorism Division, had recently completed the FBI Academy and become an agent. Bowling Green was his first office of assignment.

Something Kurtz learned in his FBI Academy training made the new agent consider whether he could prove or disprove the alibi Steve Pritchard had given as to his whereabouts on the morning of the fire.

“We were able to identify his cell phone at the time, and the carrier still had those cell phone records several years later,” Kurtz explained. “Those records were key for the case. Pritchard was not in Louisville as he claimed he was.”

The cellular records, which were acquired and analyzed by the FBI’s Cellular Analysis Survey Team (CAST), supported Brandi Pritchard’s later account that Steve Pritchard drove her to work after setting fire to the home. She logged into her work computer system at 3:34 a.m., according to testimony. Further cell phone data analysis showed that Steve Pritchard then returned to the Columbia area after bringing Brandi to her workplace.

At trial, expert testimony from the CAST agent added key evidence to support statements by witnesses that they had heard the couple discussing setting the fire and claiming the insurance money. Prosecutors also introduced evidence that Steve Pritchard had been involved in several other insurance-related arsons.

Kurtz stressed that cooperation among agencies was invaluable in successfully prosecuting the case, but added that using the federal court was key to the long sentence Steve Pritchard received. The death of Assistant Chief Sparks during the fire added to the seriousness of the charges.

“While this 30-year sentence does not return a devoted public servant, friend, and family member to the Adair County community, it should give crystal clear notice to those who would engage in arson for profit that the United States Attorney’s Office will seek significant punishment for such conduct,” said the U.S. Attorney for the Western District of Kentucky, Russell M. Coleman, in a statement.

In reflecting on the case, Kurtz said that Steve Pritchard clearly thought about the insurance money and his plan to set the fire, but “he never once stopped to consider what could happen when the firefighters responded.”

In recognition of National Missing Children’s Day—observed annually on May 25—the FBI reaffirms its year-round commitment to reuniting missing and kidnapped children with their families and asks the public for help in bringing them home.