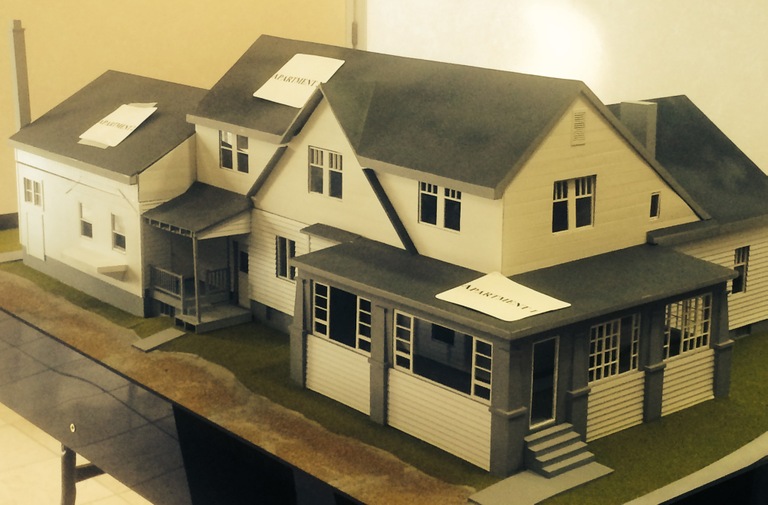 Shown is an FBI Laboratory-constructed house model that is a replica of the building where the victims in a Cleveland labor trafficking case were held. Using the model, one of the victims and other witnesses were better able to describe what was going on in the house to investigators and to the jury during the defendants’ trial.

In October 2012, a young woman was arrested by police in Ashland, Ohio for shoplifting a candy bar. But when she explained why she stole the candy, her story concerned the officers, and, eventually—after additional information was obtained—the Cleveland FBI opened a federal investigation into the matter.

It turned out that the young woman, who was cognitively disabled, was being held against her will and forced to perform manual labor for a couple who lived in a multi-dwelling house not far from the store where she was arrested. And it wasn’t just the woman herself being held—it was her young daughter as well. Mother and daughter had been living in the apartment—in squalid conditions and enduring constant threats—since August 2010. The withholding of food was just one of the methods their captors used to control them.

Last month, after an investigation by the FBI and the Ashland Police Department, a federal judge handed down substantial prison terms for the two primary defendants following their convictions on labor trafficking charges: Jordie Callahan was sentenced to 30 years, while Jessica Hunt received a 32-year sentence. And earlier this year, acquaintances Daniel Brown and Dezerah Silsby were also sentenced for their supportive roles in the conspiracy to deprive the victims in this case of their freedom.

Back in 2010, Callahan and Hunt, who knew about the young woman’s disability, targeted her and her daughter and invited them to live in their apartment. Once there, the defendants used force, threats of force, physical restraint, and threats of physical restraint to make sure they stayed, forcing the older victim to clean and do yard work.

Some of the defendants’ actions included:

Fortunately, the October 2012 arrest of the woman for shoplifting ultimately led to her freedom—and the freedom of her daughter.

An integral aspect of the federal case against Callahan and his co-conspirators was the work done by the FBI’s victim specialist in Cleveland and the U.S. Attorney’s Office victim-witness coordinator, who jointly navigated through a myriad of organizations and government entities to ensure that both mother and child received needed services and support, from the beginning of the case through trial, sentencing, and beyond.

Wine dealer sentenced to 10 years in prison for selling $30 million worth of counterfeit wine.