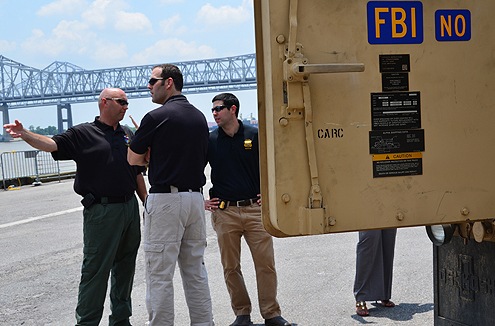 FBI agents train with local responders during a WMD exercise in May.

Providing answers to such questions is the job of our weapons of mass destruction (WMD) coordinators, special agents located in each of the FBI’s 56 field offices who work with local, state, and federal law enforcement; government; academia; and private industry to counter the WMD threat.

The FBI created the Weapons of Mass Destruction Directorate in 2006 to ensure a coordinated approach to incidents involving nuclear, radiological, biological, or chemical weapons. Carrying out that mission on the ground are the WMD coordinators, whose goal is prevention through preparedness and partnerships.

“When there are potential WMD incidents like a tanker spill or industrial accident, we are very good at assessing them,” said Special Agent Dave Autrey, the WMD coordinator in our Denver office. “Usually, we can quickly discern if there is any link to terrorism.”

Working through the Joint Terrorism Task Force (JTTF), Autrey relies on a network of organizations in Colorado—from first responders to executives at the state’s Department of Public Health. “I reach out on a regular basis to nearly 80 different agencies and departments in my area,” he said.

That outreach consists of training—everything from threat briefings to tabletop exercises that play out WMD scenarios—to building relationships. “You don’t want to meet a partner from another agency for the first time on the scene of an incident,” Autrey said. “That puts everybody behind the curve.”

“The idea is to get people on the same page,” he added. “If everyone is properly prepared and sharing information during an emergency response, firefighters and other first responders can know exactly what they are dealing with before they even get to the scene. And law enforcement can rapidly determine if the incident is terrorist-related.”

A key resource for Autrey is the Colorado Information Analysis Center (CIAC)—a multi-agency fusion center designed to use intelligence to facilitate criminal and other investigations.

Robin Koons, a Ph.D. epidemiologist with the Colorado Department of Public Safety, works full-time at the fusion center as an analytical supervisor. She is a subject matter expert in biological, chemical, and radiological agents. Koons works closely with Autrey on WMD matters and praises the Bureau’s intelligence-driven, all-inclusive approach.

“We have a very solid relationship with the FBI,” she said. “The strength of that relationship can especially be seen during suspicious powder events. Working together, we are able to quickly exchange information on the scene between the fire department, health department, and other responders, and then the JTTF coordinates the information coming in to form a complete picture of the threat.”

The exchange of information “absolutely works,” Koons added. “And a big part of why it works is because Dave puts in a lot of time building relationships.”

“The FBI relies heavily on our state partners,” Autrey explained. “They are the experts in their regions, and they know all the players. To effectively deal with the WMD threats we face requires everyone to work together.”

Resources:
- More about the FBI’s Weapons of Mass Destruction Directorate
- How we respond to threats

“It was a wonderful experience. I wouldn’t trade any of it for the world. And you know, I hope in some small way, maybe I made it easier for women after me.”

The Hoover Legacy, 40 Years After: Part 3

The mid-1930s were an important turning point for J. Edgar Hoover’s Bureau. It had just defeated a series of dangerous gangsters. Its agents were now heralded as “G-Men.” And it was no longer one of several indistinct “Divisions of Investigation.” In July 1935, it was given a new name to go with its rising success—the Federal Bureau of Investigation.