Gang Stole Jeeps to Sell Across the Border 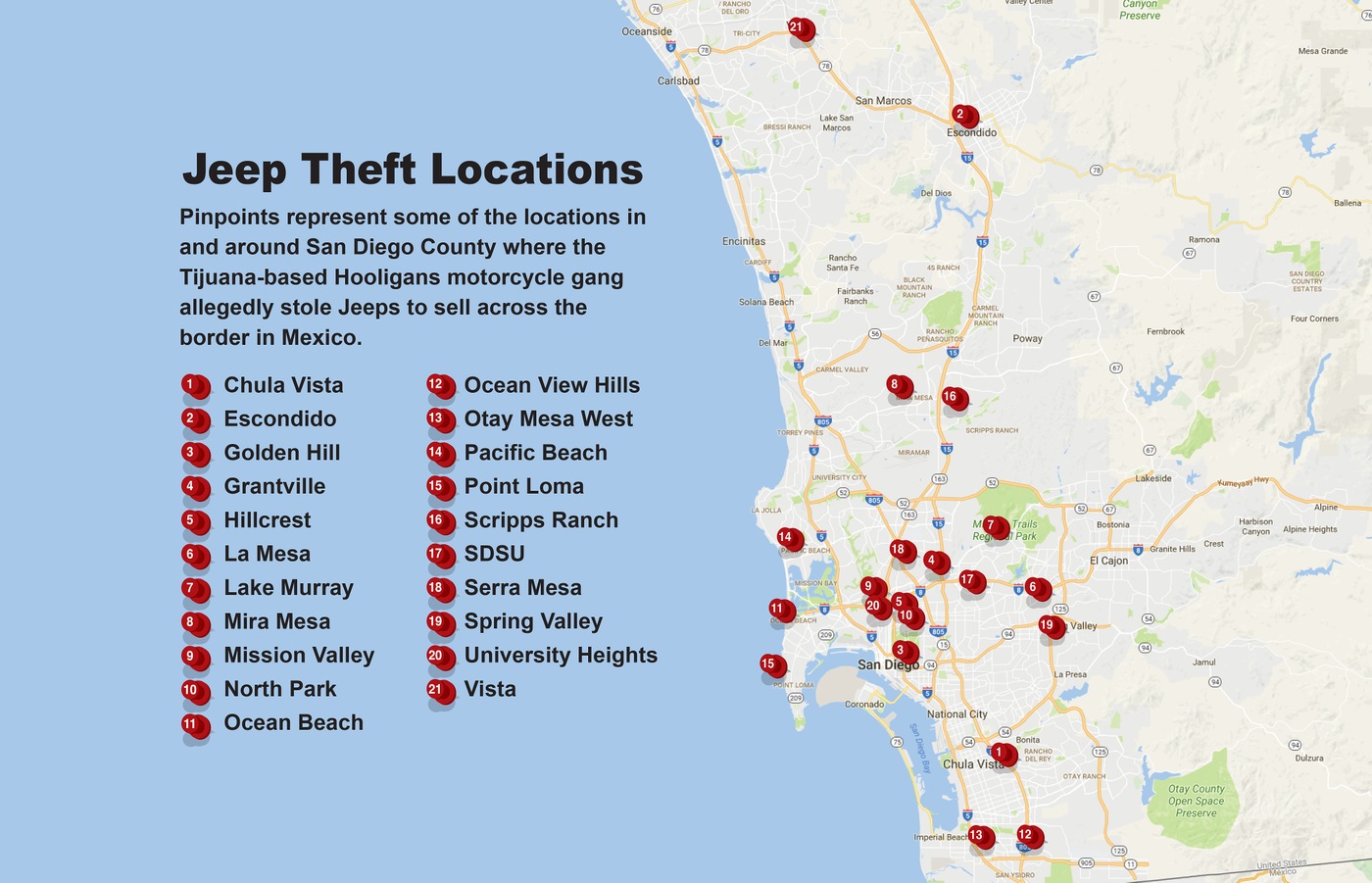 Nine members of a Tijuana-based motorcycle gang are facing criminal charges for their roles in a brazen high-tech scheme to steal more than 150 Jeep Wranglers and motorcycles in the San Diego, California, area to sell across the border in Mexico.

According to the charges announced on May 30, members of the Hooligans motorcycle gang canvassed San Diego County looking for specific Jeeps based on the model type and accessories. The gang—a transnational criminal organization with members in the U.S. and Tijuana—was responsible for about $4.5 million in vehicle thefts dating back to 2014.

“The joy ride is over for these Hooligans,” Deputy U.S. Attorney Mark Conover said in a statement following the arrests of two of the alleged gang members. Three of the nine suspects are in custody; the rest are fugitives believed to be in Mexico.

Thieves are seen on security video stealing a Jeep from a home in Rancho Bernardo, California, on September 26, 2014.

Court documents in the case read like a Hollywood script: Gang leaders selected the cars to steal, then “scouts” scoured the streets to find the desired cars and retrieve the vehicle identification numbers. With that information in hand, the leaders would get replacement keys cut. When the thieves returned at night to steal the vehicles, they arrived in groups—often two would work on the car while another stood lookout in a getaway car. One would open the hood to disable the horn and flashing lights while the other opened the driver’s door with the new key. He then plugged a handheld device into the car’s diagnostic port to program the replacement key’s microchip to turn off the alarm and operate the car. With the car now under the thief’s control, he quietly drove it away, followed by his accomplices, bound for Tijuana.

It wasn’t until September 26, 2014 that the Regional Auto Theft Task Force, which includes 14 law enforcement agencies and the FBI, caught a break when the theft of a Jeep Wrangler was captured on home security video in Rancho Bernardo. The grainy early morning footage shows three men stealing the vehicle by disabling the alarm and using a key and a handheld device to turn on the engine. The driveway theft took less than two minutes. Further investigation revealed a car dealership in Mexico provided the proprietary information for “replacement” keys in nearly 20 of the Jeep thefts.

“The FBI, along with our law enforcement partners, will continue to work day and night to stop these large-scale international crime rings,” said Eric Birnbaum, special agent in charge of the FBI’s San Diego Field Office.

In addition to laying out details of the case, court records reveal the bravado among the thieves, who coordinated their schemes and bragged on social media. In one exchange in 2015, according to court documents, one subject commented to a co-conspirator on Facebook about his prolific thefts in the U.S.

“You’ve already cleaned those poor people up,” the subject wrote.

“They don't leave me anything outside anymore. Only garage. I have to go around jumping fences and walls,” the co-conspirator responded.

“Hahaha, even with that they can't stop us,” the first subject wrote back.

Seven of the suspects charged on May 30 are from Tijuana; the other two are from San Diego and Imperial Beach, California. They range in age from 20 to 33. They are all charged with conspiracy to commit transportation of stolen vehicles in foreign commerce and face up to five years in prison if convicted.

“The FBI, along with our law enforcement partners, will continue to work day and night to stop these large-scale international crime rings.”

A man who claimed that DreamWorks stole his idea for the characters and story behind the popular 2008 film ‘Kung Fu Panda’ is behind bars after his fraud scheme backfired.