Therapy Dog Program a First for the Bureau

The FBI uses a variety of working dogs—highly capable canines that can sniff out drugs and bombs, bolster security, and alert their handlers when they pick up the scent of blood. But Dolce, with his shimmering yellow coat and steel blue eyes, is the Bureau’s one and only therapy dog.

The job of a victim specialist, or VS, is to ensure that victims receive the rights they are entitled to under federal law and the assistance they need to cope with crime. With his lovable personality, Dolce excels at comforting crime victims and their families. The story of how he became a VS—of the K-9 variety—is a story in itself.

Pierce, a psychologist who worked for the Department of Defense and law enforcement before joining the Bureau about five years ago, suffers from rheumatoid arthritis, a chronic inflammatory disease whose symptoms can be debilitating when they strike. In 2004, she went to a local shelter looking for a puppy she could train to be a service dog. That’s where she found Dolce.

“I thought it would be nice to have a dog that did some things around the house for me when my symptoms flared up,” she said. “There are days I can’t move or even lift a sheet.” 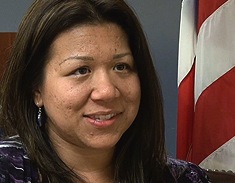 Last year, Rachel Pierce and Dolce received the FBI Director’s Award for Excellence for “distinguished service for assisting victims of crime.” Pierce was recognized for creating and implementing the therapy dog program—the first of its kind for the Bureau.

“It was an honor to get the award,” said Pierce, who would like to see the therapy dog program expanded to other FBI offices. “I know a lot of other victim specialists around the country who would be interested in training and working with a therapy dog. I would love to see that happen.”

Meanwhile, Pierce and Dolce work cases together, and in her spare time Pierce is training her new puppy, Kevlar. “Dolce has to retire someday,” she said. “I hope it works out that Kevlar will take his place.”

After extensive service dog training, Dolce learned how to turn light switches on and off, load laundry in the washing machine, and even retrieve drinks from the refrigerator. “He is a very good service dog,” said Pierce, who is based in our Nashville Resident Agency. “But service dogs are not supposed to interact with the public.”

That was a problem, because Dolce loves people. Pierce soon realized that Dolce’s intelligence and temperament would make him a terrific therapy dog. She knew from her military experience that the Army has a successful therapy dog program, and she set out to introduce a something similar at the FBI.

On her own, Pierce undertook an extensive training regimen with Dolce, and he passed registration exams given by Pet Partners and other organizations. In 2009, after spending many volunteer hours taking Dolce to nursing homes, camps for grieving children, and other places that use therapy dogs, Pierce’s proposal for the K-9 Assisted Victim Assistance Program was approved by the FBI and adopted as a pilot program.

Since then, she and Dolce have had a very positive impact, comforting victims and their families in murder cases, kidnappings, and bank robberies, where Dolce’s presence is a calming influence on tellers who minutes before may have had a gun pointed in their faces.

Studies have shown that the presence of an animal in a stressful situation can produce a calming effect, Pierce said. “It can lower blood pressure and make you feel more relaxed.” In the immediate aftermath of a bank robbery, for example, a calm witness can better relay information about the crime to investigators.

“We have worked a lot of cases together,” Pierce said, “helping victims of child pornography and even white-collar crime, where senior citizens lost their life savings to investment scam artists. Dolce has helped a lot of people,” she added. “I am so proud of him for all the lives he has touched in a positive way.”

Knowing what to ask—and what not to ask—is essential, as is knowing how to get young crime victims to open up. The recent training was for 17 law enforcement officers from four Central American countries.