American Contractor Murdered in Iraq in 2009 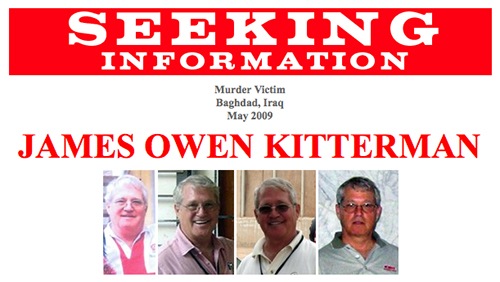 A reward of up to $20,000 is being offered for information in the 2009 murder of U.S. contractor James Kitterman in Baghdad, Iraq.

American contractor James Kitterman was last seen alive on the evening of May 21, 2009, in Baghdad, Iraq. His body was found the next day inside his vehicle, and his killer or killers are still at large.

Although nearly five years have passed since Kitterman’s death, the FBI investigation continues. Today we are announcing a reward of up to $20,000 for information leading to the identification, arrest, and conviction of the person or persons responsible for the murder.

“We have put a lot of effort into this case,” said Special Agent Marc Hess, who is leading the investigation from our Washington Field Office. “We have interviewed more than 100 potential witnesses in Iraq, Afghanistan, the U.S., and the Philippines—but despite our efforts, we need the public’s help.”

A poster seeking information has been placed on our website and is available in Arabic and Tagalog in addition to English. Anyone with information about the case is encouraged to contact their local FBI office or the nearest American Embassy or Consulate, or to submit a tip online. All tips can remain anonymous.

Kitterman, who was 60 at the time of his death, owned a private construction company and was contracted by the U.S. government to build a helipad at the U.S. Consulate in Baghdad. The work was taking place inside the Green Zone—the roughly four-square-mile area housing U.S. military personnel and their international coalition partners located in central Baghdad. Kitterman lived and worked inside the Green Zone, which was considered a secure area for Americans and had security provided by locally recruited guards.

Complicating the investigation is that possible witnesses—as well as suspects—are scattered around the world. During that time period, contractors came to work in Iraq from many countries. Kitterman’s now-defunct company, Peregrine Eyes, recruited its employees from various countries, although the majority of the workers were from the U.S. and the Philippines.

Hess, who has been working the Kitterman case since 2010, has coordinated with the FBI’s legal attaché offices to help enlist the support of our international law enforcement colleagues. He believes the $20,000 reward may help bring more people forward, particularly in Iraq.

“Although the international aspect of this case has made it difficult,” Hess added, “what’s important is what is always important in investigations—that people who have information need to come forward and do the right thing.”

Since the murder, Hess has been in regular contact with Kitterman’s brother. “The family isn’t giving up on finding his killer,” Hess said, “and neither is the FBI.” He added that Kitterman was well liked and respected in the international contracting community, “and his employees all said he treated them like family.”

Help us locate those responsible for James Kitterman’s murder. “He deserves justice,” Hess noted, “and his killer or killers deserve to be caught and held accountable.”

Twenty-five years after the oil spill, we continue to support our partners on environmental crime cases.

We work with our federal partners to combat the rising tide of tax-related identity theft.