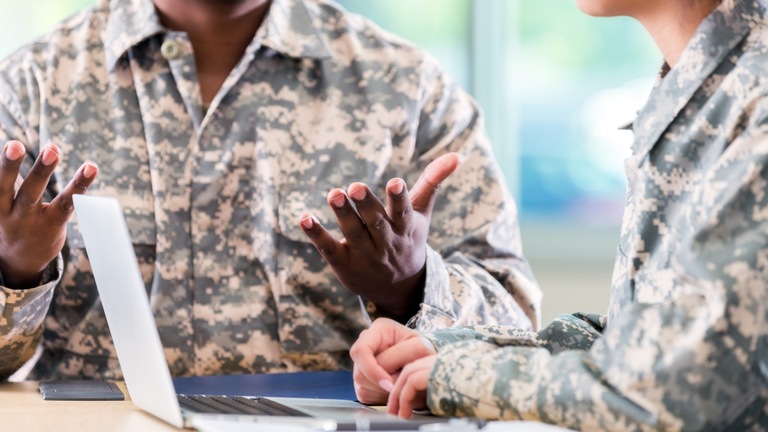 The GI Bill provides the country’s service members and veterans a free or reduced-cost college education to those who qualify, offering them a head start on their return to civilian life. But one group of fraudsters used the Post-9/11 GI Bill and other U.S. Department of Defense educational programs for veterans as a piggy bank to line their own pockets while cheating more than 2,500 service members out of an education they were entitled to under the law.

“This was straight up stealing. Stealing money for veterans that was supposed to help them advance their careers and make themselves more marketable to employers after coming out of the military,” said FBI Special Agent James Eagleeye, who investigated the case out of the FBI’s Newark Division along with investigators from the Department of Veterans Affairs (VA), the Department of Defense, and Department of Education.

The scheme was a basic bait-and-switch. A company called Ed4Mil worked with two schools: one, the private liberal arts Caldwell University in New Jersey; the other, an online correspondence school hired by Ed4Mil to develop and administer courses. Ed4Mil aggressively recruited service members and veterans, offering them free computers and gift cards to sign up for what they thought were classes taught by Caldwell University. Yet when Ed4Mil enrolled the students, they would put them in and pay for unaccredited correspondence school classes—but then charge the government the university tuition rates and pocket the difference.

At the center of the scheme was Ed4Mil founder and president David Alvey. The Harrisburg, Pennsylvania resident saw a business opportunity in educating veterans with government funds but learned that when the government provides tuition and other educational benefits directly to a school, certain requirements must be met that his startup could not satisfy.

To get around the law, Alvey conspired with a Caldwell University official to use the university’s name on coursework that the VA would not have approved. The official—then an associate dean at the school—falsely certified that students were taking the same courses from the same instructors who taught on campus at Caldwell.

But the veterans were instead enrolled in online courses like archery and heavy diesel mechanics that were actually taught by the correspondence school. Students sometimes received a housing allowance for the online school, in violation of the rules governing educational benefits.

Caldwell University has publicly said that current university officials had no knowledge of the fraud, and the university cooperated fully in the investigation.

In some cases, Ed4Mil would take a one-semester correspondence course that cost less than $1,000, break the course up over several semesters, and charge the government $20,000 for the classes to make it seem as if they had been taken at a university.

Ed4Mil also failed to notify service members that they would need to pay their tuition money back to the VA if they didn’t complete a course. In the case of the fraudulent courses, Ed4Mil officials would simply fabricate a grade to make it appear as though the coursework was being completed, as they did not want the service members to complain about owing back tuition.

“This was straight up stealing. Stealing money for veterans that was supposed to help them advance their careers and make themselves more marketable to employers after coming out of the military.”

The scheme went on for about four years, until a student became suspicious of the course content. The student looked up the actual cost of the course he was taking online through the correspondence school and alerted the VA Office of Inspector General (OIG). The VA OIG approached the FBI to partner on an investigation.

As the scheme began to unravel, Ed4Mil scrambled to hide their subcontracting relationship with the correspondence school from their students and attempted to develop their own curriculum—although this curriculum still likely would not have met VA requirements for reimbursement.

Alvey collected most of the profits himself—more than $20 million. He bought a mansion, artwork, and high-end cars and also started other businesses. Under his plea agreement, any ill-gotten gains will have to be forfeited as part of the asset forfeiture process.

Eagleeye saw the fraudsters’ actions as a flagrant abuse of veterans’—and the public’s—trust.

“The military members were presented with this pitch from somebody they thought was from an accredited university. These salespeople were allowed on the reservist post or military base by their military superiors,” Eagleeye said. “To the soldiers, everything appeared to be legitimate.”

The FBI’s partnership with the Department of Veterans Affairs was crucial to rooting out and stopping the corruption.

“This was egregious on so many fronts. The courses were overpriced, they were not high-quality classes, and they spread them out over more months than needed. They wasted the limited monthly entitlements of these veterans,” said VA OIG Special Agent Jenny Walenta. “This was a very well-run case because we worked it collaboratively. Everyone had their own expertise, but we worked together and did our part to help each other stop this fraud that was hurting veterans.”

At an event organized by the FBI and the Chicago White Sox, hundreds of baseballs and bats seized during a sports memorabilia fraud case were donated to inner-city youth baseball leagues.

The developer of a malicious piece of software called NanoCore RAT—which allowed hackers to steal sensitive information and even access the webcams of infected computers—will be spending time behind bars.