At a July 10, 2018 event organized by the FBI and the Chicago White Sox, hundreds of baseballs and bats seized during a sports memorabilia fraud case were donated to inner-city youth baseball leagues.

John Rogers was a prolific forger of sports memorabilia who fleeced banks and individual investors out of millions of dollars. And although his victims are unlikely to be repaid, Rogers’ fraud has provided an unexpected benefit for a group of inner-city teen baseball players in Chicago.

Earlier this week on the city’s South Side—an area known for gang violence and homicides—Special Agent Brian Brusokas and nearly 20 other FBI employees from the Bureau’s Chicago Field Office delivered 125 Louisville Slugger bats and dozens of baseballs to young players whose leagues are sponsored by the Chicago White Sox organization.

The equipment was seized during the Rogers fraud case, and after the forged signatures of Mickey Mantle, Babe Ruth, Albert Pujols, and other famous players were chemically removed or blacked out, the bats and balls found a new home among youngsters who have embraced baseball as a way to stay out of trouble and to possibly earn a college scholarship.

“These kids are doing the right thing and trying to live the right path in life,” said Brusokas, who led the Rogers investigation as part of the FBI’s Art Crime Team. “We wanted to give them something that they needed.”

“If we took one of these bats and put it in the hands of one of these kids,” said FBI Chicago Special Agent in Charge Jeffrey Sallet, “could that bat make a difference for that kid?”

Sallet, who was on hand for the equipment donation and spoke to the players and coaches, explained that engaging with the community is fundamental to the FBI’s mission and to its success as an organization.

“These kids are doing the right thing and trying to live the right path in life. We wanted to give them something that they needed.”

“We as the FBI earn the American people’s trust every single day,” he said. “The best way for us to keep that trust is to be out there showing everybody that we are human beings, that we are part of the community.”

“We are very thankful for the donation they gave us,” said Kenny Fullman, who manages the White Sox Amateur City Elite (ACE) program. “And we are thankful to all the agents who came out today to spend time with our kids, to play catch with them, and talk with our kids. Any time we can get someone to come out and be positive around our kids and talk to them about their careers, we are very thankful for that.”

The ACE program—and a similar Major League Baseball initiative, Reviving Baseball in Inner Cities (RBI)—aims to keep Chicago teens away from gangs and, through baseball, offer them skills and opportunities to help them succeed on and off the field. “We use baseball as a stepping stone to further their education,” Fullman said, “so they will be successful people in the future.” 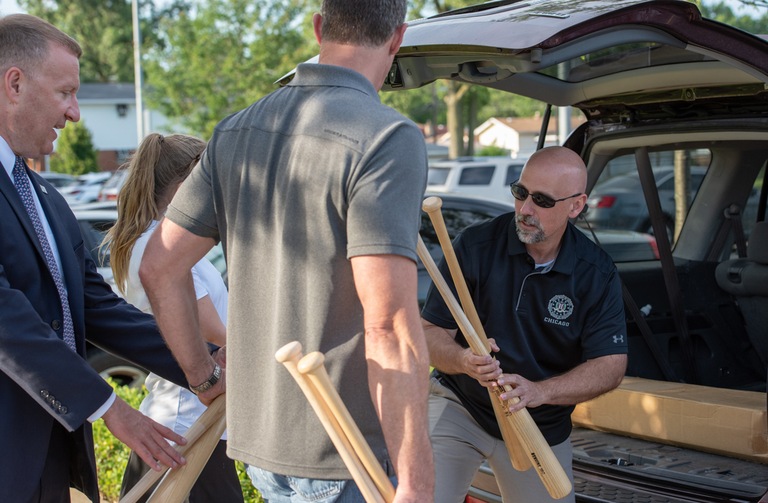 FBI Chicago Special Agent Brian Brusokas (right) hands out baseball bats to Special Agent in Charge Jeffery Sallet (left) and other Chicago Division employees for distribution to young, inner-city players whose leagues are sponsored by the Chicago White Sox. The equipment had been seized during a sports memorabilia fraud case.

“Our ACE kids have to perform academically and athletically,” noted Anthony Olivo, manager of youth baseball initiatives for the White Sox. “We offer a safe environment to get them off the streets and on a narrow path and provide them an opportunity they might otherwise never have.”

The program has been successful. Since it began in 2007, ACE participants have received nearly 170 college scholarships—nearly 70 of them at the Division 1 level, Olivo said. And 24 players have been chosen in the Major League Baseball draft. 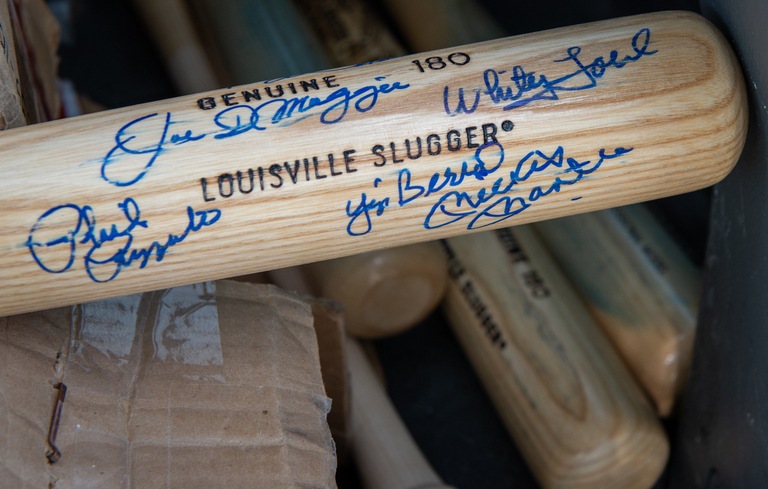 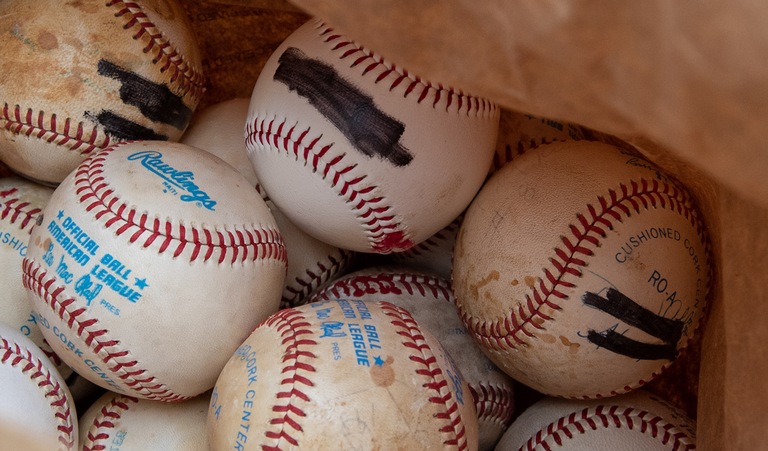 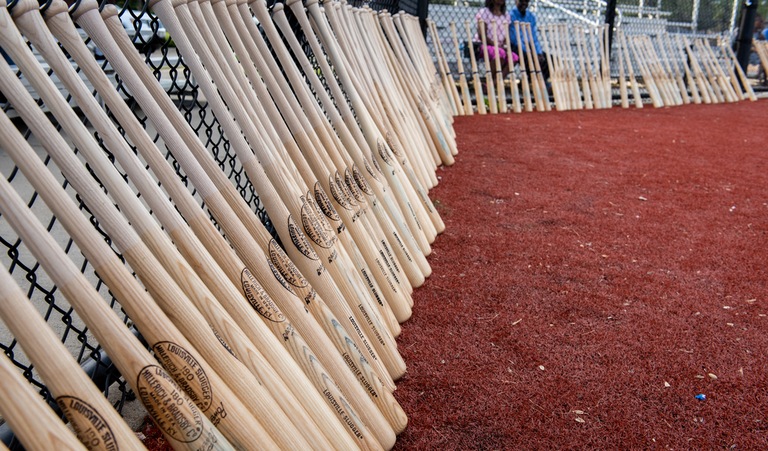 After forged signatures—including those of Mickey Mantle, Yogi Berra, and Joe DiMaggio—were chemically removed from the bats and blacked out on the baseballs, the equipment found a new home among Chicago youngsters who have embraced baseball as a way to stay out of trouble and to possibly earn a college scholarship.

The FBI equipment donation—allowed by a court order from the federal judge who in late 2017 sentenced Rogers to 12 years in prison for his crimes—provides an added resource for the players, Olivo said. “Nowadays, baseball equipment is so expensive. It could be unaffordable for some of the athletes in our programs.”

A similar number of bats and balls were also donated to youth leagues sponsored by the Chicago Cubs, and equipment will also be donated in Little Rock, Arkansas, where Rogers’ business was located.

Brusokas noted that sports memorabilia represents a billion-dollar industry. “Unfortunately, there is a lot of fraud in the industry, just like in any billion-dollar industry,” he said. “We can’t undo John Rogers’ crimes,” he added, “but being able to donate these bats and balls to a worthy cause is something we can all feel good about.”

A Maryland man was sentenced to 20 years in federal prison for conspiring to provide material support and resources to the terror group ISIS and for engaging in terrorist activity.