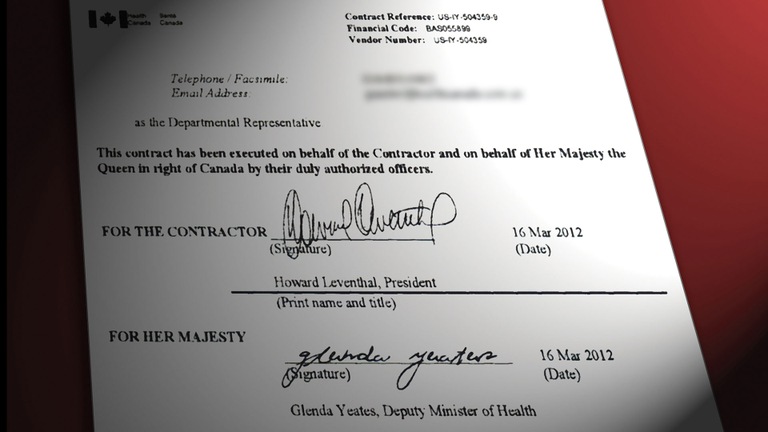 As part of his elaborate fraud scheme, Howard Leventhal claimed that his company was doing millions of dollars of business with Canada. In reality, he invented this contract and forged the signature of Glenda Yeates, then the country's deputy minister of health.

Howard Leventhal was an imaginative criminal. The scheme he devised to bilk his victims was like a work of fiction—science fiction.

Leventhal claimed to own a company that produced a medical device inspired by the popular television and movie series Star Trek. The McCoy Home Health Tablet—supposedly similar to the tricorder used by the show’s Dr. Leonard McCoy—was billed as a diagnostic tool that would allow instantaneous delivery of patient data to doctors from the user’s tablet or smartphone.

Leventhal raised money by claiming that his company, Neovision, had contracts with the Canadian government. To back up that bogus claim, Leventhal stole the identity of Glenda Yeates, at the time Health Canada’s deputy minister of health, and produced fraudulent documents under her signature.

He then targeted factoring companies. Such companies buy or service a business’ accounts receivable for a sum less than the receivables are worth and profit by collecting the difference. Factoring companies are a legitimate means for businesses in need of cash to raise funds without taking loans.

“He was going around to different factoring companies and showing that he had contracts with Health Canada,” said Special Agent Chris Delzotto, who investigated the case from the FBI’s New York Division. “He was actively soliciting investment money for his company and then using that money for his personal benefit.”

Leventhal created a sophisticated online presence to give the appearance that Neovision was doing business with Canada. “He also created fake e-mail addresses for other people who are actual Health Canada employees,” Delzotto said, “so that if anyone was checking, correspondence would go back to Leventhal and not the Canadian officials.”

In fact, no one at Health Canada had ever heard of Leventhal, let alone his futuristic product. An FBI investigation was opened in 2013, and a sting operation was arranged using an undercover agent posing as a wealthy investor. Leventhal was arrested and charged with wire fraud and aggravated identity theft.

“Leventhal was a smart guy who, unfortunately, had no regard for honesty or his victims. He also showed absolutely no remorse for what he did.”

While he was out on bail, Leventhal began using an alias—Edward Ben-Alec—and launched a new scheme similar to the one he had just been arrested for.

“He went to great lengths to get a second fraud up and running while he was out on bail,” Delzotto said, including forging letters from prominent Illinois politicians to solicit funds for another medical device. “His M.O. was to steal people’s identities and use them to fabricate business documents and bank statements.”

Leventhal was arrested again and sent back to jail. In December 2013, he pleaded guilty to the wire fraud and aggravated identity theft charges in the Neovision case, and in December 2016, a federal judge in New York sentenced him to five years in prison and ordered him to pay victims approximately $1.3 million in restitution.

“Leventhal was a smart guy who, unfortunately, had no regard for honesty or his victims,” said Delzotto, who has been investigating financial fraud case for many years. “He also showed absolutely no remorse for what he did.”

The inaugural gathering of current and former agents of color celebrated the role they have played in the FBI’s past—and the vital role they continue to play.

A California church pastor is behind bars for his role a long-running scheme that amassed nearly $3 million in illegal fees from distressed homeowners.